(From left) Travis Meyer, Tristan Schuh (back), Joshua Stuck and Chris Mayse are shown rehearsing a scene from “Escanaba in da’ Moonlight” in which the characters are thrown about when an explosion rocks the Soady Deer Camp.

just what the doctor ordered. Folks can forget about their problems and they’re going to have a good time watching it.” Another plus? The show uses Upper Peninsula language and slang.

“It’s a hunting story taking place during the first night at deer camp. All of the guys are excited to shoot a deer and one of them needs to finally shoot a buck,” Mines said. The story centers on Reuben, eldest member of the Soady family, and his quest to shoot a deer. He’s never claimed a deer kill and for this reason believes he’s been cursed. He also believes he must break the curse by breaking from tradition.

“One of our strengths is the Joshua LaLonde, our set designer. He’s toured the world working on sets and has designed sets for Disney. He has recreated a hunting camp. The play takes place entirely in the deer shack. And the props are very fitting, as they transform the stage to the back 40.”

The production has encountered some roadblocks due to lingering effects of the pandemic.

“We had a hard time getting folks in for auditions. Some just weren’t ready to make that jump, but we’ve worked around it and we have a great cast,” Mines explained.

As a producer, Hornick explained that she’d gone from Plan A to Plan Z.

“There are protocols to be followed when any entity puts on events for the public. It will be different as everything has changed during the past months,” she said. “The Chancellor has instituted a mask mandate for all campuses that we will follow. Socially distant seating options will be available. The actors wear masks at rehearsal. During the performances the actors are allowed to be on stage without masks. And we will have sanitary stations available as well.”

Performances will last about two hours which Mines described as being short for a play. Another change? There will be no intermission. He added that his cast is creative and intent on making this a fun adventure for all attending.

“I love how it develops organically, it’s always developing. The story is still relevant. It centers on changing traditions because they’re not working anymore. It’s set in November 1989 but it could have taken place yesterday,” Mines added. The story centers on hunting and its traditions set in the Escanaba area.

Mines first directed children’s theater at TOB starting in 2015 including a fall and winter production and “the big summer musical.” Among his directing credits are: “The Hobbit,” “Secret Garden,” “Disney’s Aladdin JR,” and “Rosencrantz and Guildenstern Are Dead.” He’s acted in TOB performances “off and on” since 1992. This will be his fifth time as show director.

Hornick became TOB’s producer July last year when those responsibilities were placed within the Outreach part of the Division of Continuing Education.

Theatre on the Bay is located in the Theater Building at the University of Wisconsin-Green Bay, Marinette Campus, Bay Shore Drive, Marinette.

For ticket information visit uwgb. edu/marinette. Further questions can be directed to Linda Hornick, at hornick@ uwgb.edu or by calling (715) 504-3351.

About the author: Ann Dallman has lifelong roots in the U.P. Her first middle-grade novel, “Cady and the Bear Necklace,” which was published in 2019, has won several awards. For more information visit anndallman.com. 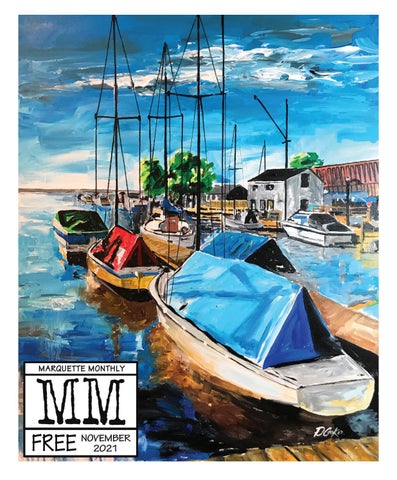