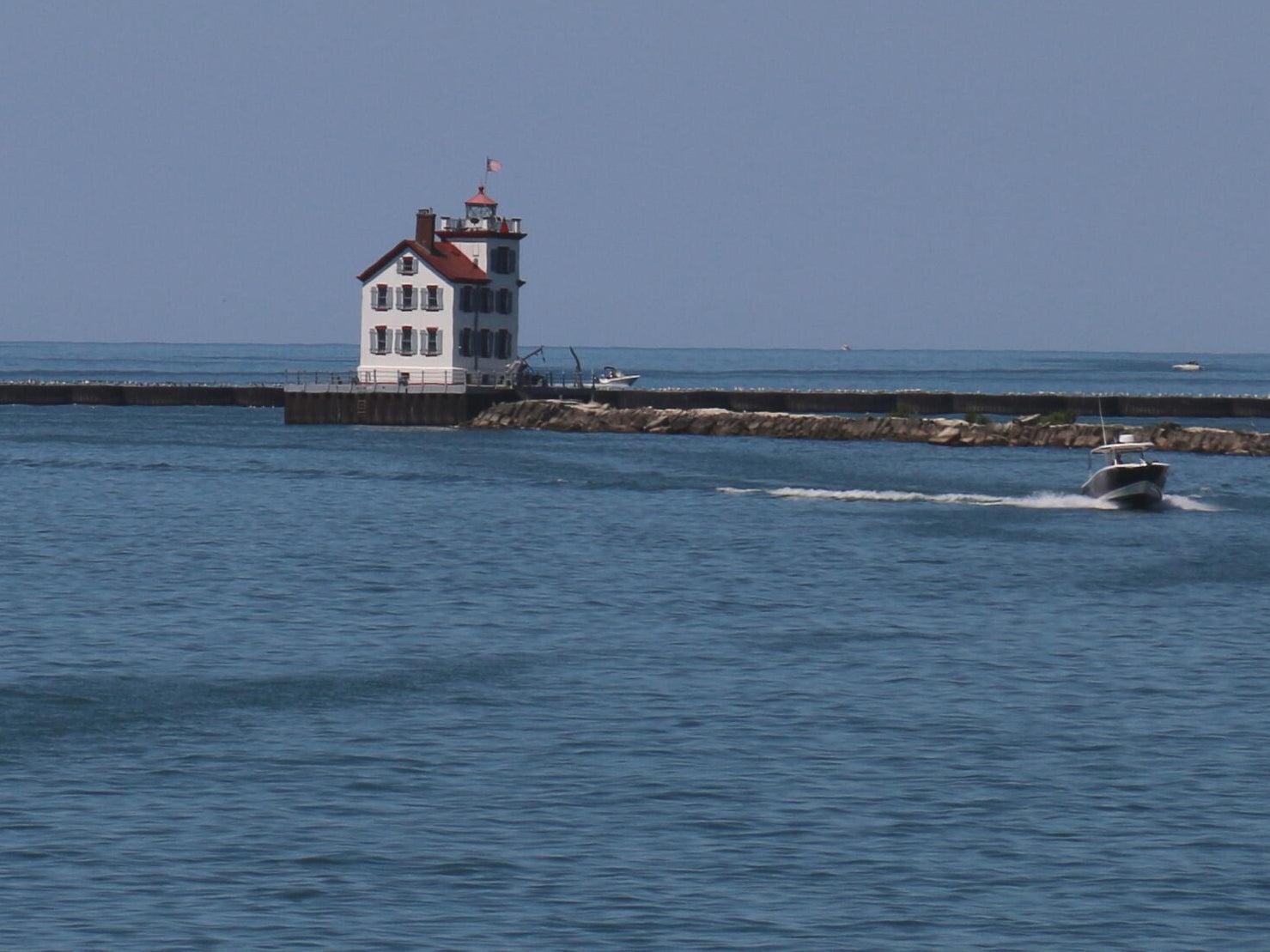 For 2021, FireFish Arts has “re-imagined” its work within the newly revitalized downtown Lorain, launching new monthly arts programming, and in late August through September, the re-imagined annual FireFish Festival. Designed as a month-long series of events spanning four weekends, this new direction continues the work of FireFish Arts as a responsive arts organization, harnessing the creative energy of the whole community, including artists, partners, and the downtown business community working together to achieve mutual goals.

Responding to both new challenges but most importantly to new opportunities, this re-imagined festival offers more chances over a longer period for the community to engage both in FireFish Festival art and performances in a revitalized downtown Lorain,

In September 2015, FireFish Arts launched the first FireFish Festival, presenting it to the public as an opportunity to

“re-imagine Lorain as it becomes a stage for a scorching array of art, dance, music, and fire. Opera or hip hop in an alley, art installations and galleries in storefronts, fire dancers and drummers in the street, or cabaret in an abandoned building – anything is possible at FireFish!”

The first FireFish Festival was designed to celebrate the region's freshwater link to Lake Erie, the Black River, and its industrial heritage. It drew more than 10,000 visitors, showcasing art, dance, and theater, culminating in a dramatic pyrotechnics display. The most important early goal of the first festival was to enliven an empty Downtown Lorain with the arts and artists, showing both the potential of the district and the power of the arts to make a difference. Called "creative placemaking," it is a concept known nationally and internationally as an especially effective re-development tool in both small and large downtowns.

The signature arts programming that has been the anticipated hallmark of the annual FireFish Festival takes place this year over four themed weekends (August 29 – September 18). Marketing and Program Manager Candice Pettigrew Ruckman describes one important reason for the change:

One of the things we’ve heard about the festival is there is so much to see in such a short amount of time. So we will essentially be spreading the signature, high-quality arts programming that has been a part of the FireFish Festival into a month-long event for 2021, as well as FireFish Arts programming all summer long.

While significant FireFish programming has always been provided by Lorain and Lorain County artists and performers, the majority of both the year-round and festival programming in 2021 is provided or curated by the FireFish Artist Board. Arts Program Manager Ryan Craycraft adds,

“Lorain is a creative place, and FireFish and the Artist Board are working to highlight and impact downtown Lorain. We want to feature the artists across multiple genres that are living and working in downtown Lorain as respected paid arts and culture entrepreneurs.”

FireFish Arts summer programs officially launched in early June at Riverside Park with the live painting of a new temporary mural titled Waterfront Blooms by Lorain artist Carida Cira Diaz. A native of Chicago newly relocated to Lorain and a member of the FireFish Artist Board, Ms. Diaz studied at the Rhode Island School of Art and Design, Brown University, and the Chicago Portfolio School and recently completed an artist residency at Chicago’s WNDR Museum. The mural, painted on the LoCo ‘Yaks storage shipping container, can be viewed through September 2021 and is located at the Loco ‘Yak’s new launch site at 138 Alabama Avenue in downtown Lorain.

The mural imagery features the local flora and fauna at its waterfront location and is surrounded by a new pollinator garden designed and planted by FireFish Artist Board Member Joshua Biber. A graduate of Brown University, Biber studied modern culture and media and worked at WaterFire Providence, an “inspiration” for the FireFish Festival. He is also a multi-media artist and musician and proprietor of Black River Farmstead, specializing in sustainablygrown microgreens, baby greens, and local seasonal berries and vegetables.

As another summer-long temporary public art installation provided by FireFish Arts, Broadway in Bloom complements Main Street Lorain’s Beautification Project “Lorain Blooms” plantings along Broadway and the organization’s partnership with Lorain County Community College. Craycraft is an Elyria native with extensive experience in community and public art and is a graduate of Lorain County Community College (Associate of Arts), Akron University’s Meyer University (Bachelor of Arts), and University of Delaware (Master of Arts) who currently teaches at both LCCC and the Cleveland Institute of Arts.

Fire it Up! programs, presented at the “The Bank” at 383 Broadway, also occurred Friday, July 2, and have been scheduled for August 6, and September 3 as part of the new FireFish Festival 2021. The venue, described by developer and program partner Vic Nardini as an emerging arts and entertainment development, has been a favorite site of artists and community members at past FireFish Festivals.

The Fire It Up! Livestream series produced by Luke Theall from downtown Lorain’s BroadWaves Studio can be heard on the FireFish Arts Facebook page and will also be highlighted at these events, which are also aligned with Main Street Lorain’s “Broadway Block Party on First Fridays” schedule.

At Fire It Up!, FireFish offers fire, art, audio, and video performances presented by community Artist Board members, including highlights of programming presented earlier in 2021. These highlights include work by Jeffery Pye, an accomplished Lorain artist who paints portraits of noteworthy African American men and women with students from the START W/ART program at the Harrison Cultural Community Arts Centre.

Lorain Then & Now: A Look into the Past from the Future, a curated multi-media video presentation by Hiatt Hernon, can be viewed at “The Bank.” This presentation focuses on Lorain’s past by using forms of today’s media. Local artist and photographer Jason Shaffer will curate large-scale portraits of FireFish Artist Board members providing a sneak preview of a new two-year community and public art project titled “Portrait of a City.” This program will engage artists and art students from Lorain High School and Lorain County Community College as apprentices to artist board members and other Lorain artists, including Artist Board Member Daisy Goddard.

The Jevon Terance Raceway Fire Collection XVI, a new Raceway Collection with a fiery twist, was held at Black River Landing on Sunday, July 18. An annual highlight of each FireFish Festival, this year’s fashion show experience by Lorain’s International Fashion Designer Jevon Terance, also a member of the FireFish Artist Board, became part of the summer programming that also previews FireFish2021: A Festival Re-imagined.

The Fire Song, a film by Lorain native and LA filmmaker and FireFish Board Member John Baumgartner, will debut on Sunday, August 21, at The Lorain Palace Theater. This dramatic story features the history of Lorain’s historic Lutheran Church, the fire that devasted it and its historic organ, and its rebuilding.

Over four themed weekends, FireFish Arts will once again present our signature theme-based art, performances, and installations, including the construction of the FireFish by Daniel McNamara and the FireFish Finale by Schuyler White/Ohio Burn Unit. The festival will culminate in the annual FireFish FINALE ritual processional and Burning of the Fish, scheduled for Saturday, September 18, 2021.

The FireFish Festival and Finale was the vision of one of our founders James Levin, who created and produced the first four FireFish Festivals. Levin, a nationally recognized leader in creative placemaking, will be honored by the organization with the new designation of the burning of the fish extravaganza as the “James Levin FireFish Finale.”

Twin Flames kicks off the festival on Sunday, August 29, with a special live cabaret performance of show tunes by Lorain natives Jaclyn Bradley and Melissa Driscol. Located at “The Bank,” this special live performance features “two songbirds” that share a unique personal history and artistic camaraderie, born in our very own steel town.

Jaclyn Bradley, a FireFish Artist Board member and nationally and internationally respected vocalist and owner of the new Lorain Rock Town Music Academy, is a graduate of Indiana University’s Jacob’s School of Music. A singer, songwriter, and recording artist, her music has been featured on stages and screens worldwide, including as a contestant on “The Voice of Holland” and “Ireland’s Got Talent.” Her music has also been featured on MTV, VH1, HGTV, Bravo, and TLC

Melissa Driscol, a graduate of Admiral King High School, hails from the family that owned the respected Driscol Music Co. on Broadway. Driscol now resides in Manhattan and is an event producer at the legendary Stonewall Inn in New York City. Her theater credits include Equity Theaters around LA and multiple guest artist tours on cruise ships. She also joined the USO and has traveled to Guam, Japan, and all over the USA, performing for both active-duty military members and veterans.

Driscol spent her youth performing at both Lorain Community Theater and Elyria Community Theater and studying at both Oberlin College and Baldwin Wallace. Early in her career, she served as Music Director at the Lorain Palace Youth Theater. It was there that Bradley became her student one summer, and the two began a lifelong friendship and mentorship.

On Friday, September 3, there will be fire, audio, and video performances presented by FireFish Arts community Artist Board members and other invited artists. This special family-friendly event will be at the “The Bank,” located at 383 Broadway.

FireFish Festival Arts in the City

On Friday, September 10, at 7 p.m., comedian David Morales will present a curated show of comedy, music, and art at “The Bank,” 383 Broadway.

On Saturday, September 11, the community can follow our self-guided tour or hop on a guided tour with FireFish Founder James Levin and FireFish Executive Director Joan Perch of new art sites and public art in downtown Lorain. Meet the artists and creative entrepreneurs changing the face of downtown Lorain, and enjoy an interactive art experience at the Jason Molina Song Alley, designed by Kurt Hernon.

On September 18, the annual ritual processional and Burning of the Fish takes place on the west bank of the Black River, north of the Bascule Bridge—followed by an after-party featuring the Sammy DeLeon Band. Additional arts performances and installations, art vendors, and family-friendly activities will be available at The Bank Building and the LCCC City Center.

FireFish Director Joan Perch sums it all up in this statement:

We are excited about all of the new arts programming FireFish Arts is bringing to downtown Lorain this year, the partnerships with our artists, new organizations like Main Street Lorain and others, and the City of Lorain, as well as the support and interest of all to make downtown Lorain a true arts and entertainment center, including with community and public art.

This story is from:
Lorain Local Magazine—Issue Eight
by lorainlocal