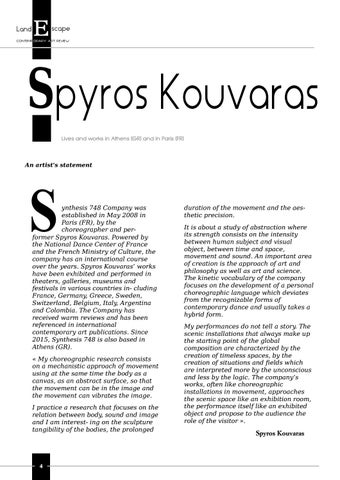 ynthesis 748 Company was established in May 2008 in Paris (FR), by the choreographer and performer Spyros Kouvaras. Powered by the National Dance Center of France and the French Ministry of Culture, the company has an international course over the years. Spyros Kouvaras’ works have been exhibited and performed in theaters, galleries, museums and festivals in various countries in- cluding France, Germany, Greece, Sweden, Switzerland, Belgium, Italy, Argentina and Colombia. The Company has received warm reviews and has been referenced in international contemporary art publications. Since 2015, Synthesis 748 is also based in Athens (GR). « My choreographic research consists on a mechanistic approach of movement using at the same time the body as a canvas, as an abstract surface, so that the movement can be in the image and the movement can vibrates the image. I practice a research that focuses on the relation between body, sound and image and I am interest- ing on the sculpture tangibility of the bodies, the prolonged

duration of the movement and the aesthetic precision. It is about a study of abstraction where its strength consists on the intensity between human subject and visual object, between time and space, movement and sound. An important area of creation is the approach of art and philosophy as well as art and science. The kinetic vocabulary of the company focuses on the development of a personal choreographic language which deviates from the recognizable forms of contemporary dance and usually takes a hybrid form. My performances do not tell a story. The scenic installations that always make up the starting point of the global composition are characterized by the creation of timeless spaces, by the creation of situations and fields which are interpreted more by the unconscious and less by the logic. The company’s works, often like choreographic installations in movement, approaches the scenic space like an exhibition room, the performance itself like an exhibited object and propose to the audience the role of the visitor ».