FROM THE SARGASSO SEA TO WILLISTOWN AND BACK 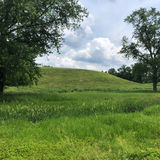 from The Sycamore
by joyce Spragins

NEAR LEFT: The American eel hatches in the Sargasso Sea and uses currents to move from its hatching grounds to fresh water in streams, lakes, and ponds along the east coasts of North, Central and South America, from Greenland south to Brazil. After 3 to 40 or more years, they return to the Sargasso Sea where females release their eggs and the cycle repeats. Map courtesy of U.S. Fish and Wildlife.

American eels are an important member of our freshwater community, but these unique fish start their lives in the ocean. The American Eel is the only catadromous fish in North America, which means that it spawns in the ocean and then matures and spends the majority of its life in freshwater streams, including those in the Willistown area! With breeding grounds in the Sargasso Sea, the young larvae, called leptocephali, spend their first year at sea. They then transform into glass eels and travel upwards of a thousand miles to freshwater inlets along the East Coast. The elvers (young eels) travel upstream until they find suitable habitat - while males tend to stop early and stay in brackish habitat, the industrious females travel all the way to headwaters streams. During their freshwater stay, they mature into yellow eels and feed on aquatic insects, worms, mollusks, other fish and crustaceans, especially crayfish. In fact, eels are being studied as a potential native control for invasive crayfish species in the Delaware River Basin. Crum Creek, in the Trust’s Kirkwood Preserve, is part of this ongoing study which is being conducted by the Academy of Natural Sciences of Drexel University, Delaware River Keeper, and the Pennsylvania Fish and Boat Commission. Once eels have reached maturity which can take upwards of 20 years, they assume their final form as a silver eel and return to

their historic breeding ground in the Sargasso Sea to resume the cycle anew. Aside from being important predators (or prey) in the ecosystems they pass through, migratory eels also provide a source of transportation for the larvae of a number of freshwater mussel species. Mussels play a critical role in keeping our waterways clean. These bivalves are filter feeders that live in the stream bed and pass water through their system to find food. In one of the most unique partnerships in nature, the mussel larvae attach to the gills of migrating eels to hitch a ride to find a new location to settle upstream. They need to have this host fish to complete their life cycle, and without the eels, the larvae do not survive. Water connects us all, and the endurance of this species highlights how changes in our landscape can have wide ranging impacts. Historically, eels existed in almost every waterway in the Delaware Basin and played an important role as a food source for the peoples who lived along the water. As waterways have been developed and dammed, the fish have been excluded from portions of their historic range and populations have declined. Thankfully, the combined efforts of many parties (including installing fish ladders, reintroduction and dam removals among other projects) have led to eels finding their way back into parts of their native range.

This story is from:
The Sycamore
by joyce Spragins