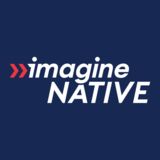 from imagineNATIVE 2007 Catalogue
by imaginenative

Join us at the official imagineNATIVE Welcome Reception, as we launch the 2007 festival at the Native Canadian Centre of Toronto with opening prayer from honoured elder Garry Sault of the Mississaugas of the New Credit First Nation and appearances by Susan Aglukark and others.

The Welcome Reception is a community gathering, with a focus on the representation, voices, and languages of the many nations of Canada, and the coming together of the international Indigenous arts community.

This story is from:
imagineNATIVE 2007 Catalogue
by imaginenative