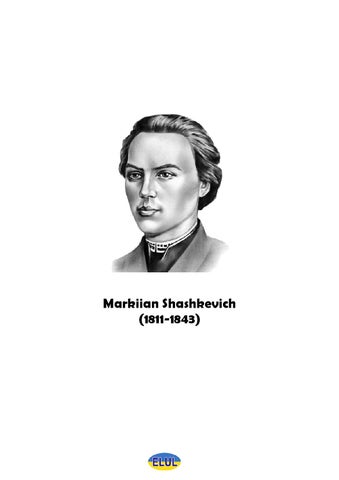 Markiian Shashkevich (1811-1843) Son of a priest, and himself a priest, Shashkevich was born in the county of Zolochiv in Galicia, a Ukrainian province forming part of the former Austro-Hungarian Empire and at that time under the domination of the Polish element whom the government in Vienna favoured. While still in the seminary, Shashkevich was inspired by the Slavic revival then sweeping the central, eastern and southeastern parts of Europe, and began himself, and exhorted others, to write in the vernacular of the Ukrainian peasant masses. The Ukrainian language at that time being forbidden in church (Polish was enforced, except in the liturgical services which were chanted in Church Slavonic), Shashkevich created a sensation by preaching a sermon in Ukrainian in St. George’s Cathedral at Lviv, the capital of Galicia. A number of other young priests followed his lead in other churches there. Together with Ivan Vahilevich and Yakiv Holovatsky, Shashkevich formed a collaborative group which came to be known as the “Ukrainian trinity” and served as a vanguard for a literary and cultural restoration in Western Ukraine (Galicia, Bukovina, and Volynia). The three also pioneered a democratic national movement, thus paving the way for Ivan Franko’s political and social activity some two generations later. Their fervent endeavours to reanimate the national spirit of Western Ukraine culminated in the compilation of Ukrainian verse and prose items under the title of Russalka Dnistrovaya (The Dniester’s Nymph), which, forbidden by Polish authorities in Galicia, was published in 1837 in Budapest. Up to that time Shashkevich’s own writings and those of his collaborators had been current only in manuscript form. The entire edition of the Russalka was seized by the censors in Vienna, but some one hundred copies of it surreptitiously found their way to Galicia and were circulated there by stealth. Meagre as was the number of the copies, the collection achieved its purpose, which was to rouse the Ukrainian element in that part of Europe to a consciousness of their specific identity. The importance of that brief volume was similar to the influence exerted in the Dnieper region of Ukraine by Kotliarevsky’s Aeneid some forty years earlier. Persecution by civilian and police authorities, as well as the extreme poverty he endured, undermined Shashkevich’s frail health and caused his premature death, preventing his poetic talent from developing into maturity. Embryonic as were the beginnings he initiated, the impact of his literary and social work, however, effected a miraculous transformation in the mentality and general outlook of his people, and gained him the distinction of the “progenitor of the national renascence in Western Ukraine.” His poetry, minor in tone and lyrical in scope, after almost a century and a half, sounds naively simple. Shashkevich belonged to that category of poets who, for lack of physical and spiritual liberty, fancifully desired to become placidly flowing brooks or birds free to soar in the limitless skies; but even in that puerile yearning a powerful voice of freedom began to be heard, presaging the time of a rebirth after centuries of suppression. The lyric “To a Primrose” is symbolic of the attempt to preserve the precarious blossoming of the new spirit of Enlightenment, and vocal with the fears of the oncoming storms threatening to cut short its existence. But for Ivan Franko, that “primrose” might have perished.

TO A FRIEND ON SENDING HIM A COLLECTION OF UKRAINIAN SONGS

So, Nikolai, these eaglets of Ukraine Both warm the heart and cheer the patriot soul; So, Nikolai, these falcons of our plain Sing loud, then soft, their mother to condole. So pleasant is the song in native art That the breast leaps for joy to hear it sung, Twining itself in grace about the heart Like some fair lass who, full of love, has clung Within her loverâ&#x20AC;&#x2122;s arms and held him tight. She gives him fond caresses; Her kiss his features blesses; His ardour to inform Her honeyed breath is warm. You fain would cease through excess of delight,

4 When suddenly a gale begins to blow That bears another gift, with vocal sounds: This night across the steppes I sought to go, In weariness I lay upon the mounds, As if to rest but really sought to hear The old past talking to the present year: The years that are old And the times long since past When glory resounded Through all the wide world The fame of our forebears, Our boyars and princes, Our Cossacks and hetmans. It tells of those events like charming dreams So softly and so solemnly, it seems Its fortune like a seaside flower blooms; Then in loud notes of grief the song’s voice booms, As if its lamentation’s bitter sounds Would call our forebears from their funeral mounds To ask for the story Of spear and of sword That faced in dread glory The enemy horde That lurked to glut upon Ukrainian flesh And of Ukrainian blood to drink afresh; And how our sword had faced the foe with zest And with its crooked tusk explored his breast; How to the enemy a bed it gave And everlasting sleep within the grave. Again the wind sounds softly, sings so fair As if it drowsed amid the shadows there; And then lets loose an echo down the valley As if across the oak-groves it would sally And would a tale to unseen listeners render How future days would burst forth in their splendour: How near the Black Sea shores It steeps its breath in flowers, And wafts itself in joy Across the steppe’s expanse; How, in the Dnieper’s waves, It washes and is cleansed, Then flies on soaring wings To seek the Dniester’s banks And on that gentle stream Takes temporary rest. It plashes with its pinions And shakes them flatteringly Before once more it rises Into the sky’s abyss And seeks the sun itself

5 To gain its heavenly light. There soaring high it will remain And in a song of mirth Proclaim the glory of Ukraine Throughout the whole, wide earth!

Monument to Markiian Shashkevich in Lviv