Women in the Age of Constantine by The Historical Novel Society

skill brings to life a mysterious period of history and shows that history, myth, and folklore can intersect in wonderfully relevant ways.

Kristen McQuinn is a medievalist, single mother, history buff, and sci-fi geek. Her book, The Two Isabellas of King John, is forthcoming from Pen & Sword Books. You can follow her on social media: @ TrekkieKristen (Twitter) or @hergraceslibrary (IG).

The late third and early fourth century AD was an age of great upheaval, a time that saw drastic change for the Roman Empire. Civil wars raged for decades. Religious persecutions painted the lands (particularly the Eastern Empire) red with blood. Legendary men rose to the zenith of power – none more so than Constantine the Great. Chroniclers and modern historians have written and discussed Constantine – and some of his famous adversaries – in great depth, all in an effort to understand his world a little bit better. But less explored are the lives of the women who lived through all this.

It is a lens that can shed a very revealing light upon the time, for this was the age of Christianity’s ascendency, and women in particular seem to have flocked to the relatively new faith. The attraction is thought to have stemmed from the Christian message of compassion, charity, and protection for the weak or vulnerable – notions which the ancient Roman polytheistic faith largely ignored.

That is not to say that women in antiquity were weak and vulnerable by default; anything but. However, they certainly did have to endure certain hardships and hazards specific to their sex: from the high risk of death during childbirth (Constantine’s first wife, Minervina, perished this way), to the chance that, from the age of thirteen, they could be coerced into marriages with much older men. Constantine’s second wife, Fausta, was this age when she was wed to her thirtyfive-year-old groom – and it was a blatantly political joining designed to unite Constantine’s family and that of Fausta’s father, the former emperor Maximian. Fausta’s reputation was tarnished when Gregory of Tours – writing two centuries later – accused her of having an affair with Constantine’s son from his first marriage. Equally Constantine’s name was seriously blackened when he was said to have had her boiled to death in her bath as punishment. Variations of these stories exist, and all are questionable but certainly not impossible.

Constantine’s mother, Helen, was probably the most famously devout Christian woman of the period. In her younger days during the persecutions – when the emperors were burning, peeling and dismembering Christians en masse – she remained unwavering in her faith. No doubt she benefitted from the protection of her powerful son, but conversely, we must remember that it was she who brought him up as a single mother (after Constantine’s father abandoned them when he was an adolescent) and instilled in him the character that was required to propel himself to supremacy. In her later years she roved to and fro across the Holy Land as something of an ancient archaeologist, a spell in which she allegedly excavated the True Cross. This, as much as anything else, meant that her reputation was assured with the later hagiographers. Indeed, to this day she is remembered and revered by the Christian Church as Saint Helena.

In contrast to the devout and lauded Helena, the wife of Constantine’s fated opponent Maxentius seems to have remained a stout pagan, and well she might. Valeria was the daughter of the eastern emperor Galerius, a man renowned for his persecution and execution of Christians. Just as with Fausta, Valeria was married to Maxentius in an attempt to bind two imperial lines together with no interest in whether the pair got on. Such was the way in Rome. We have little in the way of evidence of Valeria, barring a couple of highly suspect Medieval Church writings, but much can be deduced from that little. Valeria, as an emperor’s daughter, was socially on a level with her husband. She likely resented her fate, which took her to the far side of the empire from her father, and a lack of concord with Maxentius is suggested by the fact that she fails to appear on any of the coins minted during his reign. Yet, she clearly performed the duties of a Roman wife, producing two sons, and despite any misgivings, she must have successfully navigated the dangers of court life, for she outlived her husband. Valeria is something of an enigma, then, displaying the traditional values of a Roman empress, as far as we can tell.

She appears in one interesting legend that tells us something of women in the age: the tale of Saint Catherine of Alexandria. This almost certainly wildly fantastical tale tells of a young Christian noblewoman of Alexandria who, during the great persecutions, travelled to Rome to challenge the emperor, defeating all his pagan theologians in debate and converting many of them before Maxentius lost his temper and had her executed. Since there is no evidence of Maxentius persecuting Christians, one must treat this tale with a great deal of mistrust, but it does offer a glimpse of possible truths. That an early tradition has a woman (a Christian, of course) travelling halfway across the empire to challenge persecution suggests that such freedoms and strengths for women were not unknown. Indeed, we might remember how Helena travelled the world to collect her relics. In this tale, Catherine also converts Maxentius’s empress to Christianity. This, of course, is highly suspect.

But what we are left with from all of this is a two-fold view of Roman women in this era. In one aspect, they were pawns in the great political game. All of Maxentius’s sisters were used to cement alliances and buy goodwill from potential enemies, and their primary task in marriage was still to produce heirs and secure a dynasty. Yet in the strengths and the activities of these women, we see that they were less constrained by their position and their gender than tradition would have us believe.

The Rise of Emperors trilogy (Head of Zeus, 2021) follows the adventures of Constantine and his rivals during the climactic years of the era that led up to the famous Battle of the Milvian Bridge, in which Constantine allegedly saw a Christian vision in the sky that predicted his victory. Yet it is not a story of faith or of gods, it is a tale of humanity and all of its vices and virtues – a tale of the men and the women and their choices in a time of great distress. At every twist and turn, Minervina, Fausta, Helen and Valeria were there. History might have been very different were they not.

Gordon is a Scottish writer, addicted to reading and writing historical fiction, especially tales of the later Roman Empire, Byzantium, Classical Greece and even the distant Bronze Age (www.gordondoherty.co.uk). Simon’s background in ancient 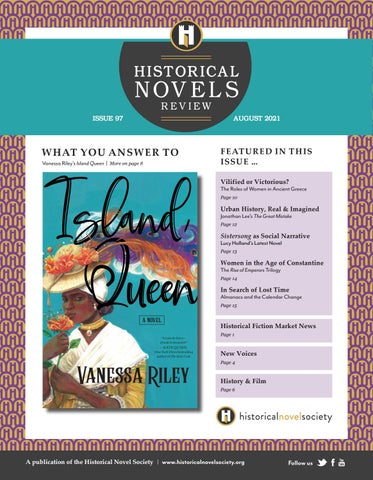 by The Historical Novel Society