from GRAY Magazine No. 59: The Warrior Issue

One more round of inspired design.

The suites of the Kalesma Mykonos, designed by architecture firm K Studio, with interiors by Studio Bonarchi, spill down a hillside overlooking the beach of Ornos Bay. The forms are built with lime-washed stone, a traditional local construction material.

The architects behind the new, luxury suites-only hotel, positioned to optimize views of the sun’s path through the sky, used traditional Myconian architecture to guide their design.

Built on a hill to capture views of sunrises and sunsets, the resort’s communal spaces include a bar, pool, and restaurant.

The sun-drenched Greek island of Mykonos is known for its dazzling blue waters, seafood-forward cuisine, and rich history. So, when architect Dimitris Karampatakis of Athens-based K Studio set about designing the 25-suite hotel Kalesma, he relied upon the island’s Cycladic architecture to inspire his design. Karampatakis and his team placed the hotel’s communal areas—restaurant, pool, bar—atop a hill, then scattered the suites down a slope overlooking Ornos Bay. “The idea was to have a very social, communal core centered around celebration,” Karampatakis says, “and when you go back to your suite, you enjoy a more private moment—it’s the same duality as in a village.” Each suite has an entrance courtyard with a shower, indoor and outdoor sitting areas, a bathroom with a tub overlooking the Aegean Sea, and a heated pool with an infinity edge. Athens-based Studio Bonarchi oversaw the interior design, creating serene spaces with a harmonious mix of textures, colors, and materials. “Myconian tradition, local history, and the aloni, the old threshing floor, were sources of inspiration for the style,” says Vangelis Bonios, the design firm’s principal. “This unique origin inspired me to create an elemental dialogue between the exceptional surroundings and the interiors. An amalgam of tradition with contemporary design elements defines my interpretation of the Cycladic style.” »

COURTESY KALESMA MYKONOS “The beauty of the whiteness that characterizes the traditional Cycladic architecture is the real protagonist,” says Vangelis Bonios of Studio Bonarchi. “It creates a calming monochrome background. Whitewashed walls together with sandblasted stone floors in earthy colors and dark wooden ceilings create an ideal canvas for the interiors, in a way that allows the blue color of the sea to stand out.”

OLYMPIC BAR AT THE FAIRMONT OLYMPIC

Seattle’s Fairmont Olympic—the historic downtown hotel that opened in 1924—is ushering in a fresh new era. In April, after months of construction, the finished first phase of a multi-part renovation was revealed: a newly reconfigured lobby with the striking, Art Deco–inspired Olympic Bar taking center stage. Local architecture firm MG2 served as the architect of record on the project, while Barcelona-based design firm Lázaro Rosa-Violán Studio (LRV) carried out the interiors program. The two creative forces collaborated to craft a glamorous space that feels contemporary but still respects the original architecture and history of the building.

“We’ve been in the Seattle area for over 50 years, living, breathing, and deeply entrenched in the history and nuances that have defined our city’s architecture,” says architect Shannon Suess of MG2. “Our primary focus and obligation were to uphold and preserve every intricate detail contributing to the Fairmont Olympic Hotel’s historic heritage, local significance, and landmark status.” »

FROM TOP: Barcelona-based design firm Lázaro Rosa-Violán Studio designed the interiors for the renovated Fairmont Olympic Hotel lobby and Olympic Bar. The original woodwork was preserved to maintain the historic spirit of the space. OPPOSITE: Various seating areas offer guests different experiences of the bar, from intimate tables for two to sofas that welcome larger groups.

COURTESY FAIRMONT OLYMPIC HOTEL “THE INSPIRATION WAS THE DESIRE FOR THE FAIRMONT OLYMPIC TO CONTINUE TO IDENTIFY ITSELF AS A MEMORABLE DESTINATION AND HOME BASE FOR THE SURROUNDING COMMUNITY AND VISITORS ALIKE.” —SHANNON SUESS, MG2

Towering above the bar is an industrial-looking custom kinetic art piece designed by LRV and engineered by Fuhtah Engineering and Prototypes. “The spark for this [art piece] came from the original hotel logo: a ship, still visible on an elevator in the lobby,” says Lázaro Rosa-Violán of LRV. “We never wanted to build an actual ship in the bar, but we wanted to use elements and materials from the nautical world, such as poles, ropes, wood, and sails. With all these elements, we designed an art piece that brings movement to the lobby, casting dynamic shadows on the vaulted ceiling.” »

The new Olympic Bar holds court in the center of the lobby. The design team of Lázaro Rosa-Violán Studio and MG2 aimed to seamlessly integrate the space with the existing infrastructure, making it feel as though the bar has always been there. A rich mix of materials and textures gives the space a cosmopolitan air.

ABOVE: At Pause Studio in West Hollywood, curvilinear wood-slat walls are inspired by the work of sculptor Richard Serra. OPPOSITE, FROM TOP: Shades of blue used throughout the space enhance the calming vibe. Treatment areas are grounded by minimalist décor and offer guests flotation therapy, infrared sauna therapy, IV vitamin therapy, and more.

“The original [Pause] location in Venice has a California beach-shack vibe,” says Cleo Murnane, cofounder and creative director at Project M Plus, “so for the second one, we envisioned a more premium experience. We kept the light, airy, and organic feel, but drew inspiration from Mediterranean coastal destinations.”

The new studio’s minimalist architecture and brand-forward color palette in shades of blue nod to the surrounding upscale neighborhood and reinforce a calming spa experience. A large lobby features curvilinear, satin-finished woodslat walls (a detail that’s repeated throughout the studio) that are, according to Murnane, “inspired by the work of [sculptor] Richard Serra. The forms and the play of light naturally guide visitors through the space.” Walls are surfaced with plaster and Roman Clay (an eco-friendly plaster finish) to provide subtle texture and are decorated with indigo-dyed artwork and handmade ceramic sculptures, vases, and wall sconces. In the hallway, a hanging piece by MQuan Studio is made from indigo stoneware discs; its desert tones complement a waterinspired wall accent painted a deep inky blue.

Earthy tones and mixed wood finishes add depth to the soothing space. “With a design theory rooted in biophilia, the effect is meant to be relaxing, tranquil, and connected with nature,” says Cleo Murnane of Project M Plus.

ABOVE, FROM LEFT: A water-inspired wall accent is framed by hallway walls finished in plaster and Roman Clay (an eco-friendly plaster finish). The treatment rooms have custom vanities. BELOW: Sierra chairs from Croft House embody laid-back California cool. 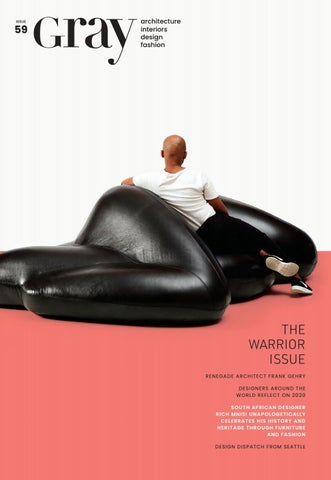 GRAY Magazine No. 59: The Warrior Issue