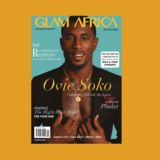 The Emancipation of Cuppy by E...

Watching 'The Smart Money Woman’ as a millenial who was born in Lagos is how I imagine Gen-X New Yorkers must have felt when shows like Sex and The City first hit their TV screens. The TV adaptation of the wildly popular bestseller The Smart Money Woman, starring Osas Ighodaro, Ini Dima-Okojie, Lala Akindoju, Toni Tones and Ebenezer Eno, is poised to be the most stylish and the most talkedabout show of the season.

The first novel, written by Arese Ugwu, was published in August 2016, selling thousands of copies before the sequel hit shelves in 2018. Ugwu decided to produce a television series alongside the books and brought in a number of writers in 2018 to develop the script. The original script team, which is entirely female-led, includes Pearl Osibu, best known as the screenwriter of comingof-age underrated classic Lara and The Beat and Africa Magic’s massive hit Battleground. The series also marks the scriptwriting debut of another strong female voice, activist and podcast host Jola “Jollz” Ayeye.

The series also boasts an arousing list of supporting talents, guest actors and cameo appearances, such as Timini Egbuson, Nonso Bassey, Temisan Emmanuel and Toke Makinwa. The Smart Tribe Media drama chronicles the life of five Nigerian 20-somethings living and working in Lagos, Nigeria. It has all the verve, fun and femininity you would expect from a show in this genre, but also addresses serious issues such as debt, loss and financial irresponsibility. It gives you some pretty savvy money lessons, whilst presenting a specific view on friendship in a way that uplifts, supports and makes fo r perfect viewing. The Smart Money Woman makes for a half hour of perfectly balanced escapism.

ON SHOOTING AND PLAYING THEIR CHARACTERS

Toni: There’s no piece of Lara’s that I wouldn’t wear. I love Lara’s style, Lara is an oil & gas executive, but she is so stylish. She’s not your around the way oil and gas executive. She’s super stylish, very chic, a little sexy and very classy. Some of her pieces were a bit formal because of her job, but I would still wear any of her clothes. I love her style and I got to keep some of her pieces too so heyyyyy!

Lala: I really loved shooting the show, and being a co-producer on it as well. It gave me a lot of insight and I grew in my problemsolving abilities for sure. In terms of playing the role of Adesuwa, my favourite part was at the end, when she finally found her power. Throughout the story it felt like she had some joy with her friends but her joy was always short-lived, so that was really my favourite moment.

Eby: I enjoyed shooting Ladun’s character immensely! It was difficult at first because Ladun is very extra. It was very hard but in the end I really had to let myself go so that Ladun could show up and be her fabulous self.

Ini: It was amazing to play Tami and I love the fact that she’s a designer. I personally love fashion, so that was a no-brainer. What I loved the most was the energy. Everyone on set was there to make it work and there’s nothing more inspiring than that.

Toni: My favourite part of shooting was... the shooting. I loved bringing Lara to life, and I had a great time playing her. I think the whole cast had a great synergy on set as well so it almost felt like one big holiday. We all had so much fun while we were shooting that it didn’t really feel like work.

ON DISCOVERING NEW FACETS OF THEMSELVES IN THE SHOW

Osas: I discovered that I loved working with people but also that I love having me time. I learned a lot from my cast mates, in terms of acting, different ways of emoting and expressing what we’re feeling and things like that. Honestly, I learned new things every day. I was very impressed by the tribe of women. I loved watching them perform, I loved learning from them and I loved bouncing off of them. It was a really beautiful experience.

Eby: I discovered that I like the good things in life (laughs). I love the fancy things of life. I loved Ladun’s luxury lifestyle so getting to play that, I was like ‘hmm, I could get used to this’!

ON RELATING TO THEIR CHARACTERS

Eby: Ladun has heart. You know at the center of it all she has heart, she has a really strong spirit and yes, we get to see that before the series is over. It doesn’t start out that way but we get to see it as the series unfolds.

Osas: In terms of what Zuri went through financially, a few years back...yeah, I had to learn the hard way: learn how to save and how to budget. I was definitely able to connect well with her in regards to that.

Ini: My best friend is a designer and her business has gone through ups and downs. Even last year she literally had to close down to restructure and she’s going to start again at the end of the year, by God’s grace. She’s my best friend so I literally saw everything she went through up close, and Tami had a similar story to her so I kind of tapped into that scenario and was able to relate to the story in that way.

ON THE DISTINCT STYLES OF THEIR CHARACTERS

Osas: I really loved Zuri’s sense of style, she’s sophisticated, work-savvy, and fashionable all through! I loved it. I loved every single piece she wore.

Lala: Adesuwa’s style! I would genuinely rob her closet, o! I don’t think there’s anything Adesuwa wore that I, as Lala, wouldn’t wear. In fact playing Adesuwa definitely opened my eyes to more possibilities. For example, Adesuwa wore a lot of pants and suits which, I mean, I’ve started to wear but not quite as often as Adesuwa would. But there were definitely pieces I would steal for myself. I love her style from start to finish.

Ini: I love using fashion to explore and express myself. It’s really an outlet for my daily self-expression and I think with Tami’s style we are really similar in that way. I love doing red carpets, wearing a huge dress and feeling like a princess. Or some days I like to go with something more sleek and sexy. For me, my style is all about who I want to be on a given day, and I think Tami is very much like that, so it goes without saying that her wardrobe was super fun!

This story is from:
Glam Africa Magazine: The New Frontiers Edition
by Glam Africa