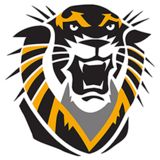 story and photography by KELSEY STEMEL

Gazing through the window of the Oceans of Kansas Paleontology lab inside the Sternberg Museum of Natural History, you might catch a glimpse of freshman Brynn Wooten meticulously scraping away more than 80 million years of sedimentary deposits from a Cretaceous fossil.

As a child, she would beg her parents to make the trip from their home in Westminster, Colo., to visit the museum where carefully preserved fossils under glass cases seemed to come to life. Brynn enjoyed creating images in her mind of what life under the ocean in the Western Interior Seaway looked like during the Mesozoic Era in Kansas. Ultimately, her love for ancient animals, plants, and the museum brought her to Fort Hays State University.

“I dreamed of coming here, studying paleontology, and volunteering at the museum,” Brynn said. “Now I’m here, doing what I’ve always wanted to do and learning from incredible people like Dr. Laura Wilson. It’s so cool – she’s a rock star in paleontology (no pun intended), and she’s doing it all. She’s proof you can be a scientist, a professor, a curator at a major museum, and have a family.” If you ask Dr. Laura Wilson, associate professor of geosciences and curator of paleontology, how she does it all, she’d humbly laugh and say, “that’s a myth.”

Wilson shared Brynn’s child-like awe for ancient life, and it’s that evercurious way of viewing the world she strives to inspire in others. Wilson is incredibly driven, and with a network of supportive family and colleagues surrounding her, she seems to have found the recipe for work and life balance that works for her.

Growing up in Georgia, Wilson’s family supported her passion for earth science, nature, marine biology and sharks, and eventually paleontology.

“I remember telling my parents that this was what I was going to do, and they were always supportive, but I’m pretty sure they thought I’d grow out of it – and I didn’t,” Wilson said.

Today, Wilson is at the forefront of a booming era in paleontology, fueled by the “Jurassic Park” generation. The magic of seeing Tyrannosaurus rex come to life on the big screen shaped pop-culture and fueled a national interest in science, inspiring a generation. Those children, Wilson included, grew up holding onto that fascination with ancient life and science. This is the generation that is making an impact and delivering groundbreaking discoveries in paleontology.

Wilson considers herself a paleoecologist. She uses research and observations of modern vertebrates and compares these with the fossils from ancient animals to draw conclusions and insight into what the ecosystem may have been like tens of millions of years ago.

Bone histology, or the study of the microscopic structures of bone, is one of the tools Wilson and students can be observed using in the lab, looking for clues to how the extinct animal grew, developed and lived, and to determine its age when it died.

The plains of Kansas are renowned for their exceptional Late Cretaceous marine sediments, which hold clues to the ecology of the Western Interior Seaway. There are fantastic fossils in the local limestone and chalk deposits, including those of Hesperonis birds, Pteranodon pterosaurs, Clidastes mosasaurs, and Dolichorhynchops plesiosaurs, as well as those of sharks, ammonoids, crinoids, and brachiopods. Wilson’s role at Fort Hays State and the Sternberg Museum is unique, and it is the reason she came to Hays. Her position is split among teaching,

advising graduate students, and service as the chief curator of the museum. That connection to the museum and science outreach is deliberate and essential.

Wilson is an advocate for science literacy and champions.

“It’s essential to all of society. A broad understanding of science has the power to affect change in our communities and world on a high level – but the challenge is that science education is self-selective. You have to want to learn it.”

“Paleontology is a gateway drug to science,” Wilson said. “It heightens the imagination, and it is fascinating to think of all we don’t know about plants and animals throughout history.”

Science and the thought process learned from science-related studies permeate everything in modern society. Science affects how products are developed and marketed, the choices we make at home and in our careers, and in how we think about news and information.

“What I learned in my education was critical thinking skills and how to write,” Wilson said. “Facts are memorizable, or you can look them up, but how to synthesize information, question, think critically, and communicate are things that are harder to teach.”

In the classroom, Wilson has the opportunity to spend in-depth time with learners, building relationships, and fostering learning. At the museum, she may only have minutes to capture the interest of a visitor and share a spark of her passion for science.

Charles Dickens once wrote of Mary Anning, affectionately known as the Princess of Paleontology, and an icon for women in STEM and geosciences, that “history shows what humble people may do, if they have just purpose and courage enough, toward promoting the cause of science.” These words describing one of the earliest paleontologists also aptly describe Wilson’s passion for teaching science literacy and the many achievements in her career. There is no question that she is an influential role model in paleontology and a humble figure for the women in STEM movement.

Wilson is the only female chair in the Peter Werth College of Science, Technology and Mathematics at Fort Hays State. She is the first female from FHSU to be published in the prestigious Journal of Nature and to be featured on NPR’s Science Friday. She was also a presenter at the historic 2016 Paleofest Conference – the first paleontology conference to present an all-female academic line-up.

If you ask Wilson what she’s most proud of in her career, she won’t hesitate to say it’s her students. Graduate student Mackenzie KirchnerSmith is now at the University of California-Berkeley completing a Ph.D.; Kelsie Abrams is the Burke Museum Fossil Lab Manager in Seattle, Wash.; and Cyrus Green is now a curatorial assistant at the Museum of Comparative Zoology at Harvard University.

Wilson has done an incredible job building upon FHSU’s already outstanding reputation in paleontology. She engages a network that brings students to Fort Hays State and sets them up for success to go on and do great things in paleontology afterward. You can see the impact of her drive and determination in the Dane G. Hansen Paleontology Research Center & Oceans of Kansas prep lab. She spearheaded the grant-writing and fundraising for the state-of-the-art facility where students can prep fossils for preservation, display, and research while also interacting with the public. “We are scientists from the day they are born,” Wilson said. “We are asking questions and problem-solving. Then, somehow we outgrow that curiosity. One of the keys to science education and building scientific literacy is reminding people to hold onto that child-like wonder. It’s about inspiring people to ask questions and critically think about finding solutions or best answers.”

The open windows of the lab provide a glimpse into the world of science and the history of Kansas ecology – engaging the community in science education. Visiting Sternberg, you will often see Wilson, or an aspiring paleontologist, working inside and encouraging all who pass through the Sternberg Museum to view the world through the eyes of a child and to continue lifelong learning.

To support the Sternberg Museum, community outreach, and student research in the fossil prep lab gifts can be made online by visiting foundation. fhsu.edu/donate and typing “Fossil Prep Lab” as the area of designation.

This story is from:
FHSU ROAR Magazine | Fall/Winter 2019
by Fort Hays State University