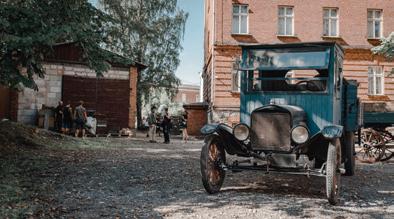 FUNDS How to Find Money in Est...

State Archive of the Russian SFSR fifty years after the film was made.

By Aurelia Aasa Photos Estonian Film Institute & Film Archive of the National Archives of Estonia Adventures of a dog with long ears, inspired by Disney’s Mickey Mouse. The authors – Voldemar Päts, Elmar Jaanimägi and Aleksander Teppor – created a landmark that can be called the beginning of Estonian animation. However, experiments in the field of animation were interrupted by the war and the post-war public order; it was years later when Elbert Tuganov, Heino Pars and Rein Raamat started to create the surrealistic animation tradition that made the Estonian animation famous around the world. 2020 marked Tuganov’s 100th and Pars’s 95th birth an-

niversary. Rein Raamat who recently received the ASIFA Lifetime Achievement Award, will celebrate his 90thbirthday this March. The year of jubileums provides excellent grounds to look back at the creative work of the grand animation artists.

FATHERS OF ESTONIAN ANIMATION – TUGANOV, PARS, RAAMAT Let’s imagine Estonia in the 1950s, where the restrictions and principles of the Soviet Union have been applied. Nikita Khrushchev reigns over the Soviet Union. A 37-year-old Elbert Tuganov, comfortably far away from the doctrines of Moscow, works in Tallinn. Tuganov is an established personality, who has spent his early years in Berlin with his aunt, an actress; he has survived the sufferings of the war and worked for more than ten years in Tallinnfilm Studios, where he has created both credit sequences and special effects. It is Tuganov who welcomes the friendly suggestion by his colleagues to start making animation films. In 1957, he establishes the department of animation at cinema studio Tallinnfilm, thus creating the basis for the tradition of Estonian puppet animation. A year after founding the department, Tuganov completes his first puppet animation Little Peter’s Dream (1958, artist Rein Raamat, camera assistant Heino Pars). This is the first collaboration between the future legends.

During the first years, Tuganov and Pars worked side by side – Pars started as a cameraman and continued as a director. Director and animation historian Mait Laas has described Tuganov as the church-builder of Estonian art of film, and Pars as the priest who has stepped in the church of puppet animation. In total, Tuganov and Pars, the holy men of puppet animation, have directed more than 70 animation films. Rein Raamat, who has been an artist in many known Estonian feature films besides animation, arrived at the field of animation some years later in 1971; when he established the department of animated cartoon films that is today known as Eesti Joonisfilm Studio. During the few decades Raamat was the head of Joonisfilm, he directed 14 animated cartoons. The fruitful collaboration between these three animators might have been thanks to the scarce competition in the field of that era, but who knows. At the same time, the authors’ contribution was even more remarkable in the days when animation was a novel genre in Estonia and everything had to be discovered through learning, experimenting and taking risks. Besides the technical complexity, the filmmakers had to learn how to hide messages between the lines, while not paying with the price of their liberty. Even if the films were successful in the international arena, only a few directors could get out from behind the Iron Curtain and enjoy the outside world – perhaps this influenced the directors even more on a personal level.

FINNO-UGRIC MYTHOLOGISTS It comes as no surprise that back then the Finno-Ugric heritage provided inspiration for filmmakers. Everyone discovered their own sources of expression, whether it be a love of nature, an ironic attitude towards a foreign power, or seemingly coincidental symbols.

Heino Pars was a typical believer in nature for whom the essence of being an Estonian was encapsulated in the buzzing of bees, folk wisdom, digging in the field or picking mushrooms in the forest. They say that Pars used to sit on the top

FROM LEFT: Hell, Operator Kõps, Tyll the Giant and The Park.

of an apple tree for hours as a child, later in life he became a beekeeper. Becoming also the founder of Estonian animation film of popular science, Pars created the character – cameraman Kõps, interested in science and nature – who can be considered Pars’ alter ego, leading us through the realms of rocks, mushrooms and berries. Heino Pars, who among many diverse events in his life had also worked in the nail factory at a Russian prison camp, has taken a few experimental roads with his films, such as The Nail I and The Nail II. Despite a few exceptions, the target audience for Pars’ films was children – and the filmmaker always gave his best to forward the positive world view with the rich hint of nature philosophy.

Elbert Tuganov, however, was an innovative, satirical filmmaker. Unlike Pars and Raamat, Tuganov’s director’s career was rather hectic – he was inspired by the Soviet space ideology (Ott in Space), science (Atom-Boy), dark fairytales (Northern Frog, Forest Tale) or criticism towards capitalism (An Almost Unbelievable Story). Today’s audiences probably relate best to his animations The Park, Pedestrians and Drivers that are all critical towards urban space. While watching the bald heads arguing about the urban planning in The Park, it is interesting that the satire once addressed to the former bureaucrats of the Soviet Union is still sharply relevant today. Tuganov’s Finno-Ugric mentality seems to be hidden in a warmly humorous approach, trying to analyze and define everything in the surroundings.

Rein Raamat, the founder of Joonisfilm, added a darker shade to the Estonian mythology. His heroic tale Tyll the Giant (artist Jüri Arrak), with its ghostly soundtrack, gets to the essence of the central heroes – those phlegmatic and heavily built peasants – in Estonian mythology. The animated cartoon Hell inspired by artist Eduard Viiralt’s feverish nights in Paris, reflecting the hidden side of being a human being and proliferation of nocturnal desires that must have been especially restrained during the Soviet era. Rein Raamat realized from the start that animated cartoons should be addressed to adults. Since animated cartoons were called multifilms back then, then even the adult cartoons were brought to children’s audiences. Quite a few people today, who were once children in front of TV screens during the Soviet era, still

“We cultivated the ground for the new field of art; out input was to create the rich soil in order the following generations would harvest the truly rich crop some day!”

complain of having a childhood trauma from watching the cartoons directed by Rein Raamat. A more conscious viewer could probably have discovered the aspect of satire, not to speak about the yearning for human freedom, in the film. As for Rein Raamat it must be also noted that through the collaboration combining various disciplines, his artwork not only preserves the spirit of the artist himself but also the mentality of the former cultural avant-garde in general. Besides collaborating with writers, composers and artists, Raamat included also acknowledged animation directors in his creative team, such as Janno Põldma, Heiki Ernits, Priit Pärn and Avo Paistik.

THE GREAT MASTERS’ HERITAGE The extensive contribution of the great animation masters can be summed up in the quote from Heino Pars: “We cultivated the ground for the new field of art; out input was to create the rich soil in order the following generations would harvest the truly rich crop some day!” Today, several generations have succeeded in the field – Estonian animation is well known on an international level, whether it be the free line by Priit Pärn; the surrealistic approach of Estonian animation or the successful franchising of the children’s animation sequel of Lotte. Despite the fact that the grand old masters have received numerous awards and participated in the retrospectives of prestigious festivals, the top films of the founders of Estonian animation are viewed rather rarely. Which is understandable, as the peak of their creative achievements occurred behind the Iron Curtain; for today’s bystanders it is much more complicated to get acquainted with the films of that era.

While searching for the roots of today’s Estonian animation, it is worthwhile getting to know the artwork by the former generations of animation filmmakers. Ethically and technically, animation might have developed in another direction; however, it is still a fertile ground of hidden symbols, experiments and self-discoveries. Perhaps today’s hectic field of animation, full of new challenges, can be compared to the one that was witnessed by the former founders in the field. Back then, censorship was the great issue. Today, we can talk about the cultural standardization and cultural imitation. Animators of former generations carved out their own way through unknown obstacles. Today’s filmmakers try to manage in home offices or studios while also striving for their own, unique language in the field. May the grand old masters be a good example with their courage to take risks, to be selfish and willing to take action in order to win all the battles on their creative path. EF

This story is from:
Estonian Film 2021/ 1
by Eesti Filmi Instituut