The Homes of Henry David Thoreau

WRITTEN AND ILLUSTRATED BY JOHN ROMAN

“I have learned that even the smallest house can be a home.”

Henry David Thoreau’s cabin at Walden Pond is his most famous residence, yet historians and scholars also credit several other sites in Massachusetts that served as “home” to this American literary figure. Looking into Thoreau’s past offers a glimpse into how his early years played a role in shaping the artist he would eventually become.

Between the years 1812 and 1819, John and Cynthia Thoreau had four children: Helen, John, Henry, and Sofia. The farmhouse in Concord, where Henry was born in 1817, is still standing at 341 Virginia Road, finely restored by the Thoreau Farm Trust in 2010. In 1880, eighteen years after Thoreau died, the house was moved from its original location at 215 Virginia Road to its present site.

The first year of Henry’s life was spent in the Virginia Road home before the family relocated eleven miles north to Chelmsford, Massachusetts. There, John and Cynthia rented “The Proctor House” and opened a dry goods store, both situated near the town meetinghouse. Three years later, when their shop proved unsuccessful, the Thoreaus moved to an apartment in Boston located at 4 Pinckney Street, a brick townhouse still standing on Beacon Hill. Between the ages of four and nine years old, Henry grew up just steps from the State House and Public Garden amid the city’s crowded urban bustle.

These are the formative years in any child’s life, and so it was for young Henry. Decades later, Thoreau wrote in his journals that while living in Boston he remembered the family’s frequent visits to Walden Pond in Concord for summer vacations and getaways; not surprising considering they had many relatives in Concord. The contrast of Boston to the rural setting of Walden left a deep and lasting impression on the boy. Reminiscing on his childhood feelings, Henry noted that he preferred Walden Pond’s “… recess among the pines” to the harshness of city life, and felt Walden was an early oasis for him where, “…sunshine and shadows were the only inhabitants.”

The Thoreaus moved back to Concord in 1826 and rented what was referred to locally as “The Brick House” in Concord Village. The following year the family made a temporary move to 166 Main Street, and shortly thereafter made another move across the street to a home at 185 Main Street, settling there for the next eight years.

In 1833, at age 16, Henry Thoreau was accepted into Harvard College in Cambridge, Massachusetts. He dormed in Hollis Hall, one of only six buildings on the grounds of the small college. While Thoreau lived on campus, his family moved in with relatives at a home on Monument Street in Concord, but Henry never resided there. Thoreau had difficulty adjusting to college life and was continually plagued with illnesses during his four years at Harvard. It’s been suggested that early signs of tuberculosis may have begun, an illness that would plague Henry the remainder of his life, and eventually claim it.

One of Thoreau’s classmates, Charles Wheeler, intrigued and impressed Henry when he built a small cabin for himself on the shore of Flint’s Pond in Lincoln, Massachusetts. Henry joyfully visited Wheeler’s hideaway several times during school breaks and holidays, and those experiences planted a seed in his mind that someday he might attempt a similar undertaking.

Upon graduation from Harvard in the spring of 1837, Henry moved back to Concord into the family’s new home in the village. Their “Parkman House” sat in the exact location where the Concord Free Public Library is presently located. During this time John Thoreau started a pencil manufacturing business, a profession that brought financial security to the household. For additional income, Henry’s mother rented rooms in their home. A small, cramped room in the attic of this house is where Thoreau first began his serious writing efforts, penning his early essays and magazine articles.

The noise and commotion of a “rooming house” atmosphere eventually proved disruptive to Henry’s writing, and he began seeking a more amicable living situation. No solution could have been better than the opportunity that arose when famous local author and family friend, Ralph Waldo Emerson, offered Henry accommodations in his large Concord home. In return for part-time handyman work around Emerson’s estate, Henry received lodging, meals, and, during off-hours, was tutored by Emerson in the art of writing.

From 1841 thru 1844, Thoreau found himself in the permanent company of Emerson, whose mentorship helped mold Henry’s literary “voice.” The two became quite close despite their 15-year age difference. By early 1844, Emerson felt his student was ready to seek work as a professional writer, so he made arrangements for Henry to temporarily reside in New York City in order to canvas the major magazine publishers for possible assignments.

In all likelihood, Emerson was aware of Henry’s long-time dream to someday build a small cabin on a pond or lake, and in the solitude of that setting, further explore his writing. This may have prompted Emerson’s purchase of land along the shores of Walden Pond. The timing of the purchase is suspicious. Emerson bought the parcel in the autumn of 1844, and upon Henry’s return to Concord from New York, he offered to rent the property to Henry giving him permission to build a private, live/work cabin on the banks of the pond.

The following spring, 28-year-old Henry David Thoreau constructed his new dwelling at Walden Pond, living there until the end of 1847. During those two years at the pond Henry wrote his first book, A Week on the Concord and Merrimac Rivers, and began taking notes for a second book, Walden, which he wrote several years later.

In the mid-1840s, with his pencil company thriving, John Thoreau decided the family needed a new home. He bought land on what is now named Belknap Street, then referred to as Texas Street because it was considered to be the outskirts of town and so far away from the village it might as well have been in Texas! There John built “The Texas House.” Henry occasionally assisted his father building this home and he moved back in with the family when it was completed.

Then, in 1850, the Thoreau family sold the “The Texas House” and bought the so-called “Yellow House” at 255 Main Street, a home with a wing at the rear for John Thoreau’s pencil shop where Henry also sometimes worked. By this time, John Thoreau & Co. pencils were winning awards for their high quality. Yet, sadly, it was in this house on May 6th, 1862, Henry David Thoreau, age 44, passed away from his ever-worsening tuberculosis.

Henry’s sister Sofia would play the key role in establishing his legacy. Like many artists and writers, Thoreau did not achieve significant fame or recognition during his lifetime. Despite this lack of public and critical acceptance, Sofia safeguarded Henry’s manuscripts after his passing. For the next several years she queried magazines and book publishers and eventually succeeded at getting her brother’s prose and poetry published. Were it not for Sofia’s loyal and determined efforts, it’s doubtful any of us would know who Henry David Thoreau is today.

John Roman is an award-winning illustrator, author of The Art of Illustrated Maps (Simon & Schuster, 2015), an adjunct professor of illustration at Massachusetts College of Art and Design, and a regular feature story writer for Artist’s Magazine. See his art at: johnromanillustration.com.

Excerpted and reprinted with permission from Electrum Magazine, an online literary journal. Visit electrummagazine.com/2021/06/the-homes-of-henry-david-thoreau to read the complete essay and see more of the author’s illustrations of Thoreau’s homes. 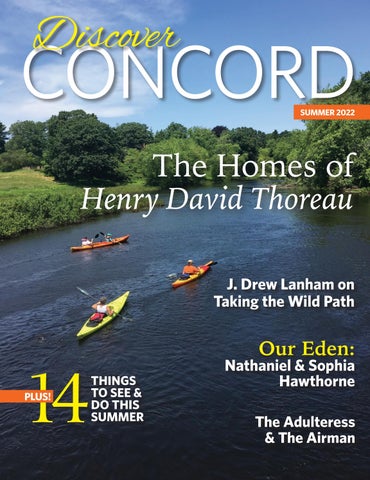