The Legacy and Allure of Orchard House's Landscape

from 'Discover Concord's 2022 Guide to the Great Outdoors' 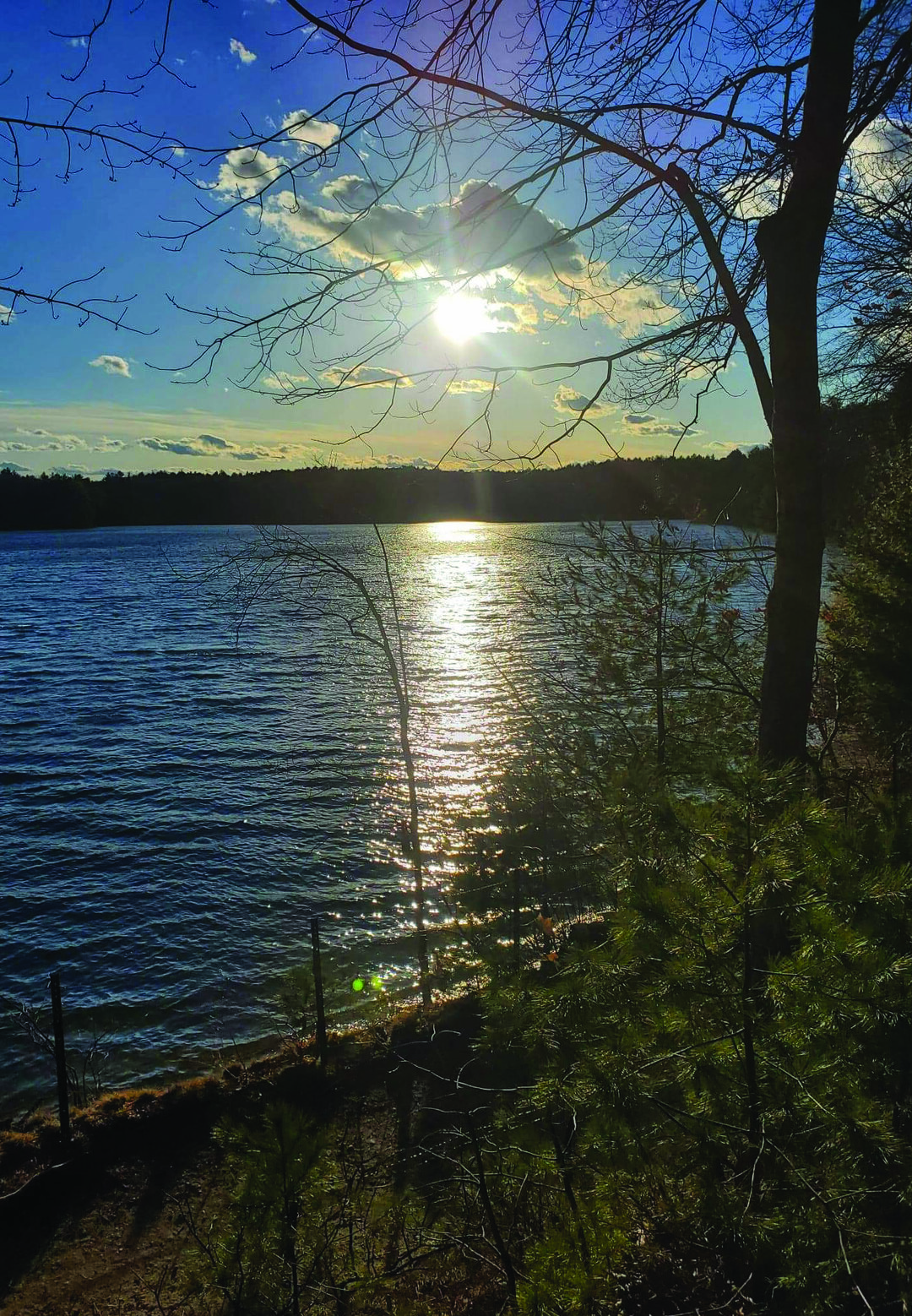 "What Evidence is There of Spr...
BY JAN TURNQUIST

The woman who uttered these amazing words as I was leaving Orchard House late one summer evening had just landed at Logan Airport from Korea and drove directly here. She continued:

“Growing up in Korea, I felt I was nothing. I was hopeless. I discovered Little Women and found a true soulmate in Jo March. I vowed to be something! Later, as a single mother of three daughters, I re-read Little Women and found renewed strength through the character of Marmee. Now, I have come to America as a visiting professor, and tomorrow, I will tour the house with one of my daughters, but first, I want to walk this land as the Alcotts did. I want to imagine the life they lived here. I am so thankful that Orchard House exists.”

Deeply moved, l left her to fulfill her pilgrimage, realizing yet again that although the great outdoors surrounding Orchard House may no longer be “great” in acreage, it is greatly evocative for so many visitors. I, too, often find myself envisioning Louisa, her family, friends, and neighbors enjoying our orchards and gardens.

In 1857, after scouting sites in Concord to settle his family after moving over 20 times, A. Bronson Alcott wrote:

“I looked at the Moore place adjoining Hillside under the Elms and butternuts … I can have five or ten acres of woodland behind the house … The house is old, but still habitable, and with some repairs might do till our means enabled us to make it what we want. All this I can have for 950 dollars. . . . it seems the fittest spot for a house, protected by the hills on all sides round from East to West and enjoying the South so pleasantly. And the house and grounds combining many advantages of comfort and tillage and estates of content.”

Although John Moore’s noted orchards containing a half-dozen varieties of apples held the strongest attraction for Mr. Alcott — and led him to bestow the name “Orchard House” on his new home — the ability to produce upwards of 35 barrels of apples per year certainly made it a “thrifty acquisition” as well.

What Mr. Alcott underrepresented was that the 200-year-old house was in dreadful condition. Considered by others as “fit for nothing but firewood” and thrown into the real estate deal for free, Mr. Alcott nevertheless set to work rescuing and modifying the structure to economically create a large and beautiful home. He worked tirelessly on the property for two decades, keeping meticulous notes and making sketches that have allowed scholars and horticulturalists to understand his vision for this “fittest spot.”

As refined and gifted as Mr. Alcott was as an educator and philosopher, he also acknowledged that he “came as naturally to the spade, the plow, the scythe and sickle as to book and pen” (1861). Born into a farming family, he had an affinity with the land and was well-read on the subject of horticulture, being familiar with classical Latin texts as well as the works of 17th century gardeners Sir John Evelyn and Ralph Austen. He was also heavily influenced by American horticulturist and home stylist Andrew Jackson Downing.

Mr. Alcott often said he “appreciated” trees and was given many as gifts over the years, particularly by Marston Watson, owner of Old Colony Nurseries in Plymouth, MA. Watson carefully selected over 60 varieties, many of which still exist here, and consulted with Mr. Alcott on their placement. The town of Concord also sent six young maple trees to Mr. Alcott in 1861 to honor his work as School Superintendent.

Long fascinated with outdoor furnishings and rustic structures, Mr. Alcott also created many bench seats, chairs, trellises, and bowers over the course of his two-decade residence. Today, our new accessible path, reminiscent of walkways that once crisscrossed the Alcott property, allows visitors to still sense the original pastoral setting.

Along Lexington Road and beside our front door, volunteer gardener Lorraine Mastropieri lovingly maintains heirloom gardens to the delight of our visitors, while on the east side of the house is the site of the family’s kitchen garden. Sample plantings there included parsnips, cucumbers, beans, turnips, leeks, potatoes, spinach, melons, beets, squashes, tomatoes, currants, and strawberries, as well as medicinal and cooking herbs. Our hope is to one day re-create the kitchen garden to increase awareness of plants and groundcover typical of the 19th century by utilizing them in educational programming and special public events.

After the circa 1938 creation of Alcott Road, no trace remained of the once-prized orchard; for decades, wildflowers grew there instead. A long-standing dream to reestablish the orchard began to come true in 2002, when then-First Lady Laura Bush and young Alcott descendants planted the first heirloom apple tree provided by neighbor John Althouse. John has continued to nurture the orchard, which now thrives and once again evinces how the home got its name.

In 2012, when extensive repairs were needed for Mr. Alcott’s School of Philosophy on the northwest corner of our grounds, a first-ever foundation was built under it, as was done for Orchard House itself in 2002. This work allowed us to create a new accessible path to the School, which maintains a five percent grade, provides people of all abilities the chance to traverse the landscape to the hillside structure, and is a picturesque way to enjoy the property.

Creating the accessible path also allowed for enlargement of our Little Women Garden, which had for decades been a beloved but small display of flowers cultivated by the March [and Alcott] sisters and described in minute detail in Chapter X of Little Women:

“The garden had to be put in order, and each sister had a quarter of the little plot to do what she liked with. . . . the girls’ tastes differed as much as their characters. Meg’s had roses and heliotrope, myrtle, and a little orange tree in it. Jo’s bed was never alike two seasons, for she was always trying experiments. This year it was to be a plantation of sun flowers … Beth had oldfashioned fragrant flowers in her garden, sweet peas and mignonette, larkspur, pinks, pansies, and southernwood, with chickweed for the birds and catnip for the pussies. Amy had a bower in hers … with honeysuckle and morning-glories hanging their colored horns and bells in graceful wreaths all over it, tall white lilies, delicate ferns, and as many brilliant, picturesque plants as would consent to blossom there.”

This expanded space required an innovative design that proved to be no small endeavor. Two neighbors and volunteer gardeners, Ellen Hartshorne Whitney and Susan Ellsworth, stepped up to the task, carefully crafting a new garden that would flow harmoniously with beauty and color through the seasons while remaining faithful to Louisa’s description. Ellen noted that, “My dear friend, neighbor, and gardening pal Susan and I have been partners in the design, installation, and now maintenance of the garden. It is always so delightful to see each other regularly on these hallowed grounds. We feel the garden echoes the same spirit imbued throughout this landscape, which has been so deeply loved and cared for over the years.”

The passage of 165 years since the Alcotts’ residence has provided no small measure of challenges. Each generation sought to preserve the inherent qualities of the property Mr. Alcott described, and sustain the inspiring landscape that informed his philosophy and prose as well as Louisa May Alcott’s writings and May Alcott’s art.

Working toward sustainability is of great importance to us today, as the concept is truly reflective of the Alcotts’ beliefs in sustainable living and their deep respect for nature. To that end, we recently installed a geothermal climate control system which allows us to end all use of biofuels; interior temperatures are now naturally regulated via use of the earth’s core temperature. We are proud and delighted that the system is both efficient and economical. At the same time, its “invisibility” is a bonus — there is no evidence aboveground of the 12 wells that plunge nearly 500 feet below, allowing the historic landscape to remain sacrosanct.

As our grounds once again awaken to springtime pleasures, I invite you to walk about our property, passing heirloom flowers, plants, and apple trees that allow us to revel in and reflect upon how the landscape affected the Alcotts and their approaches to their lives and work. Remarkably, the landscape continues to provide visceral reminders of earth’s bounty and blessings that nurtured the Alcotts and residents before them, and encourages modern-day examinations of ecology and environmental sustainability.

I keenly feel all this and more each day at Orchard House as I come and go, and I hope that you will experience the simple yet transcendent beauty as well. You may even consider creating your own Little Women Garden by consulting the planting guide available on our website at louisamayalcott.org/little-women-garden.

Jan Turnquist has been Executive Director of Louisa May Alcott’s Orchard House since 1999. In 2019, she won an Emmy for her documentary Orchard House - Home of Little Women, which is still streaming and broadcast on PBS. Her international living history portrayals of Louisa May Alcott have garnered acclaim from as far away as Japan as well as across the United States.
This story is from:
Discover Concord's 2022 Guide to the Great Outdoors
by Discover Concord MA