The Loyalist Guides of Lexington and Concord

In 1774 when Parliament passed the Boston Port Act in an attempt to break the Massachusetts colonists of their resistance to crown policy, it also authorized English General and acting Massachusetts Governor Thomas Gage to undertake any military measures necessary to help bring the colony under control. In late winter and early spring of 1775, Gage received a series of dispatches from London ordering him to not only arrest the leaders of Massachusetts’ opposition party but to launch a major strike against the apparently growing provincial stockpiles of weapons and munitions located throughout eastern Massachusetts. As he contemplated these orders, Gage considered a variety of military options, including a long-range strike against the large store of weapons located in the shire town of Worcester, forty miles west of Boston.

Realizing that this was much too risky a venture, the general decided instead to seize the military supplies reportedly stored at Concord, a march half the distance of that to Worcester.

Gage’s plan called for approximately seven hundred men, composed of the elite grenadiers and light infantry from several regiments and a company of marines, to march from Boston to Concord under cover of darkness on April 18, 1775. This “strike force,” under the command of Lieutenant Colonel Francis Smith of the 10th Regiment of Foot, was ordered “[to proceed] with the utmost expedition and secrecy to Concord where you will seize and destroy all the artillery, ammunition, provisions, tents, small arms, and all military stores whatever.” 1 One group was neither included in Gage’s instructions, nor mentioned in his subsequent accounts of the Battles of Lexington and Concord—the Loyalist guides who either volunteered or were recruited to assist the military expedition to Concord. Similarly, the role of Loyalists present in Lord Hugh Earl Percy’s relief force as it marched from Boston to Lexington on the afternoon of April 19, 1775, has also been almost completely overlooked.

A review of primary sources, including Loyalist claims for compensation after the American Revolution, suggests that at least six Loyalists were recruited to assist Lieutenant Colonel Smith’s expedition. These men helped His Majesty’s forces navigate dark colonial roads and assisted troops in locating military stores in Concord. Among the guides were former Harvard classmates and friends Daniel Bliss of Concord and Daniel Leonard of Taunton. Both were well-established attorneys who were forced to flee to the safety of Boston in 1774. 2 Also present were Dr. Thomas Boulton of Salem, Edward Winslow Jr. of Plymouth, and William Warden of Boston. A shopkeeper, grocer, and a barber, Warden had been opposed to the political and violent activities of the Massachusetts “patriots” since the Stamp Act.

General Gage had also made contingency plans in the event the expedition to Concord was in danger or jeopardy of failure. In the event of such an emergency, Lord Hugh Earl Percy and regimental units from his brigade were to march to the expedition’s aid. At six o’clock on the morning of April 19, a rider from Lieutenant Colonel Smith arrived in Boston requesting assistance. After some delay, over one thousand soldiers marched out of Boston towards Lexington.

At least seven Loyalists were present in Percy’s relief force. George Leonard of Plymouth served as a mounted scout. 3 Two other men, Abijah Willard of Lancaster and John Emerson of Worcester, also volunteered to serve as mounted guides. Emerson, a house joiner and carpenter by trade, was charged with the dangerous task of delivering “despatches from the British headquarters in Boston to Earl Percy, then covering the retreat of the troops from Concord.” 4 Willard, a veteran of the Siege of Louisbourg and French and Indian War, was positioned in advance of the column to identify any “ambush laid for the troops.” 5

Loyalists Thomas Beaman of Petersham, Thomas Aylwin, and Walter Barrell of Boston all assert they joined Percy’s relief column either of their own volition or at the request of General Gage.

During the retreat from Concord, the guides did not simply hide behind their redcoat companions for cover. At least one 1775 newspaper report suggests the Loyalists attached to Smith and Percy’s forces were armed with muskets and helped fend off the attacking minutemen and militia.

Not all Loyalist guides and volunteers made it back to the safety of Boston. John Bowen was a former officer of the 45th Regiment of Foot. In 1767 he retired from military service and settled in Princeton, Massachusetts. When he refused to recognize the authority of the Massachusetts Provincial Congress, he was arrested and confined to a jail cell.

Upon release, he fled to Boston. On April 19, Bowen volunteered to help guide Percy’s “force to Lexington.” 6

Later that day, the retired officer “was taken prisoner in returning from that skirmish.” 7

Curiously, some individuals were mistakenly identified by Massachusetts locals as Loyalist guides. Harvard tutor Isaac Smith Jr. made the grave error of merely directing Percy’s relief column towards the correct turn in a fork in a road in Cambridge. For his efforts, Smith was vilified by many colonists and branded a traitor.

The presence of Loyalists with the British column eventually garnered the attention of the Massachusetts Provincial Congress. On June 16, 1775, the delegates proposed to pardon all enemies who surrendered except General Gage, Admiral Graves, “and all the natives of America, not belonging to the navy or army, who went out with the regular troops on the nineteenth of April last, and were countenancing, aiding, and assisting them in the robberies and murders then committed.” 8 In short, the guides who helped the British expedition to Concord were forever branded enemies of Massachusetts.

The official British reports of Lexington and Concord failed to mention the contributions of the Loyalist volunteers who served with the regulars that day. It is likely the omission was intentional as the officers wished to protect the identity and safety of their guides.

Following Lexington and Concord, many of the Loyalist guides were recruited into Timothy Ruggles’ Loyal American Association, a paramilitary organization that served alongside British troops during the Siege of Boston. The companies were charged with the responsibilities of protecting various Boston neighborhoods by “constant patroling … to prevent all disorders within the district by … Thieves, Robers, house breakers or Rioters.” 9

The organization also served as the town’s fire department.

As the war progressed, the guides continued to provide military and logistical support to the Crown. Following the war, many of them resettled in Canada or returned to England.

Alexander Cain frequently lectures on the military and social influences of April 19, 1775. He also owns the blog and podcast, Historical Nerdery (historicalnerdery. com). He is the Director of Education for a Boston area vocational college and resides in Massachusetts with his wife, Paula, and his two children, John and Abigail. 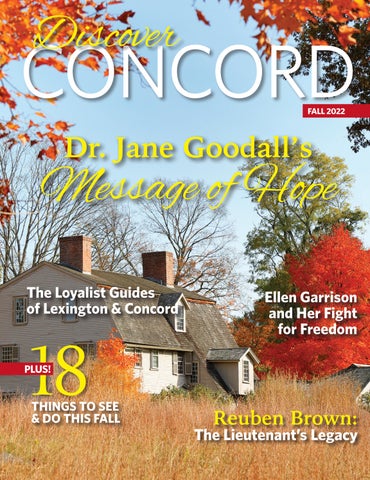