Transcending Sight: Thoreau in the Eye of the Beholder 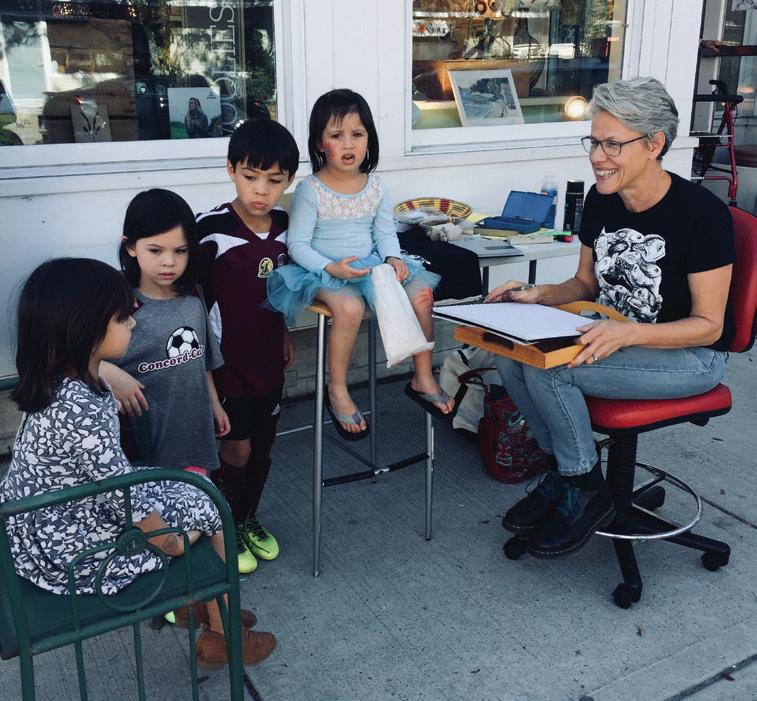 Have you ever felt a compelling need to be somewhere? More than a desire to visit a place and more, even, than a wish to learn. A need to experience and to understand? It was that kind of need that drew Kara Snyder of Pittsburgh, PA to Concord, MA this past summer.

“Why did I go to Concord?” Kara pondered, in a recent interview. “The simple answer is I went there to experience Walden Pond and to learn more about Henry David Thoreau. Reading Thoreau’s Walden back in 1982 began a lifelong obsession for me. Since that first time, I think I have re-read it about 27 times! In fact, this book is quite literally my daily guide for living. I delve into its pages every single day. So, needless to say, I wanted to see the pond. I wanted to simply be there and experience the place … breathe its air, walk its shores, feel its water. My other reason for going to Concord was to learn everything I possibly could about Henry David Thoreau: his family, his friends, his quirks, the subtle nuances of his personality, and his sense of humor.” That desire to experience the places that shaped Thoreau and to know him as a person is only one of many things that made Kara’s visit to Concord unique. One of the other things is that Kara is legally blind. Kara has extremely limited vision in one eye and none in the other. Even more challenging, her support dog, Haven, wasn’t able to join her on this trip. But nothing was going to stop Kara from fulfilling her lifelong dream of visiting Concord and immersing herself in the world of Henry David Thoreau.

In order to experience Thoreau’s Concord, Kara would need a bespoke experience: tour guides with in-depth knowledge not just of the area, but of Thoreau’s history and who he was beyond his writings. Being visually impaired, Kara would need to rely on her other senses – and to work with someone who could bring alive this experience through environments, sounds, and even physical objects that meant so much to Thoreau. This is where Alida Orzechowski and Richard Smith of Concord Tour Company came in. Alida worked closely with each venue, and was able to open up some amazing opportunities, to ensure that Kara would get the most from her trip.

The two-day journey into the world and mind of Henry David Thoreau began with a visit to The Walden Woods Project’s Thoreau Institute Library. The Library houses the most comprehensive body of Thoreau-related material available in one place. With more than 60,000 items, including books, manuscripts, art, maps, correspondence, and more, the Library offers a unique, in-depth view into the life of Thoreau. Jeffrey Cramer, Curator of Collections, a Thoreau scholar, and author himself, was moved by Kara’s sight impairment. To bring the experience alive for her, he granted Kara the rare opportunity to actually touch one of the original timbers from Thoreau’s cabin.

He also allowed a private viewing of selected items for Kara, including one of just three existing original daguerrotypes (a process invented in 1839 which creates a photograph using an iodinesensitized silvered plate and mercury vapor) of Thoreau. These were made during a single sitting in Worcester and are known to have been handled by Thoreau himself. Using a special app on her phone to magnify the image, Kara was able to see one of the most precious, and one of the rarest, objects in the Thoreau collection. It was a breathtaking moment as the image on her phone came into focus and Kara realized what she was seeing.

“It was a magical moment, watching Kara’s reaction as the image came into focus for her,” said Alida. “We welcome people from around the world and with a wide range of backgrounds and needs – but to be able to provide such a compelling experience for someone so passionate about Thoreau was one of the most rewarding moments of my career here in Concord.”

Henry David Thoreau was born in July 1817 at the “Minott House”, known today on the National Register of Historic Places as the Wheeler Minot Farmhouse/Henry David Thoreau Birth House. A visit to Thoreau Farm was an essential component of Kara’s experience as she sought to expand her understanding of his childhood. Kara’s visit to the site of the old jail house in which Thoreau famously spent one night coincided with the date on which Thoreau’s imprisonment actually occurred. Thoreau refused to pay his poll tax as an act of resistance because he didn’t wish to monetarily support any government that he believed was complicit in the institution of slavery. He was therefore jailed and took advantage of the experience to write the 1849 dossier “Resistance to Civil Government” that is now known as “Civil Disobedience.” This pivotal essay has influenced generations of activists, including Mahatma Gandhi and Dr. Martin Luther King, Jr.

One of the highlights of the first day’s touring agenda was a visit to Thoreau’s “yellow house”, where he lived for a time with his family, and where he died on May 6th, 1862. Here at the “yellow house” another surprise awaited Kara. The house is a private residence, not usually open to the public. However, Amy Barrett of Barrett Sotheby’s International Realty, was able to grant Kara entry to the house (which is listed for sale with the real estate company), where she could touch the very walls, and experience the home in which Thoreau had lived and died.

No pilgrimage to places of importance to Thoreau would be complete, of course, without a walk around Walden Pond, a visit to the site of his famous cabin, and a stop at Thoreau’s grave in Sleepy Hollow Cemetery. Alida and her colleagues ensured Kara safely guided passage to each of these locations – as well as opportunities to hear, smell, and touch (and even swim in!) these places which are so important to the Thoreau experience.

As she prepared to leave Concord, Kara reflected on the impact this trip had had on her as a student of Thoreau. “What am I taking with me as I leave Concord?” mused Kara. “I am leaving as a changed person. A person who not only has absorbed the spirit and energy of Concord, but who has gained a world of inspiration and hope from the amazing creativity that has taken place here throughout history. I came to discover Thoreau but I left with a deep impression of all the famous Transcendentalist writers. I am deeply grateful for my two tour guides from Concord Tour Company, Alida and Richard. I want to thank them for their highly specialized knowledge and their gift for storytelling. We had such a fun time —and Thoreau’s life became the palpable and living present moment...right before my eyes!”