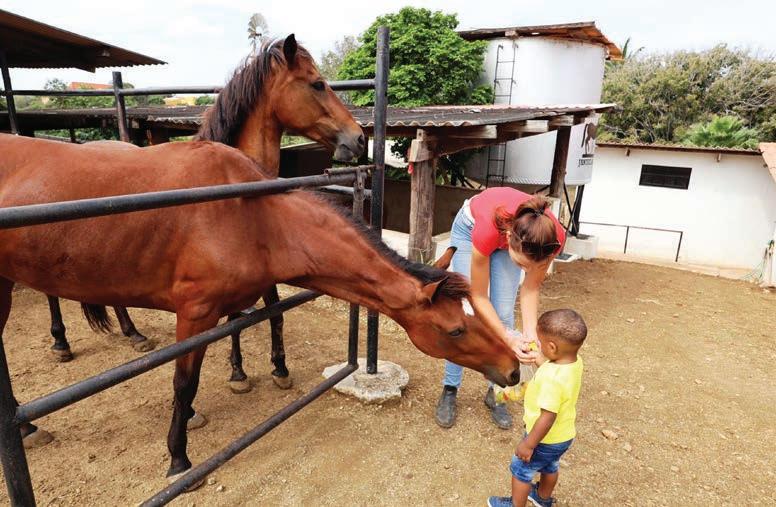 Dr. Miguel Goede is a management consultant, scientist, strategist, and one of the people behind Curaçao 2030, a platform that co-creates a vision for the future of the island. Miguel has been observing trends for a long time. In the 1990s, while working at Andersen Consulting (now part of Accenture), he collaborated on a document called “Creating our Caribbean Future” which was presented in 1997.

The document presented a set of scenarios about life in 2020, most of which turned out to be surprisingly accurate, including the growth of the internet, the development of social networks, cryptocurrencies like Bitcoin, and the massive increase in connectedness across the planet. In 2020, Miguel and a group of colleagues involved in the 1997 project got together to review the document, noting that while they had been successful in their predictions, they had missed out on the opportunity to bring about positive change on the island. “We didn’t believe in our foresight”, he says. “There was a vision, but no action”. In 2020, Miguel and the group of like-minded people started creating a set of scenarios for 2030 but this time, with the intention of using these to drive positive change on Curaçao. The Curaçao 2030 document posits four potential scenarios for the future, depending on how the island responds to COVID-19 and environmental, economic, and social factors. The scenarios are:

Curaçao 2030 analyses each scenario in detail, examining the potential economic and social consequences, the mindsets associated with, and the long-term outcomes of each one. The document identifies Scenario 5.0 as the optimal scenario which will provide the greatest economic and social benefits for citizens of Curaçao. This is based on the principles of the doughnut economic model, a visual framework for sustainable development which combines the concept of planetary boundaries with a complementary concept of social boundaries, developed by University of Oxford economist Kate Raworth. It is also influenced by the Green New Deal (GND), a set of proposals calling for public policy to address climate change and reduce economic inequality. In Scenario 5.0, rainwater collection systems and urban gardening programs increase self-sustainability by allowing people to grow food in their gardens and even on their roofs. Universal basic income replaces social welfare, and the island has an efficient public transport system based on electric vehicles. The economy is data-driven, and cryptocurrency is legal tender. Renewable energy sources provide most of the power, and the ecological system is protected by law. Scenario 4.0 shares many similarities with 5.0 but is more hierarchical in structure while both Scenarios 2.0 and 3.0 are based on a scarcity mentality and fail to innovate or adapt to the future. Should we fail, as a society, to plan and adequately prepare for the future, the outcomes that we are likely to end up with include further inequality, political unrest, high unemployment, and crime, as well as environmental disaster.

In order to achieve a positive outcome for our future, Miguel believes that we must prioritize environmental protection, honesty, food production, ICT, and entrepreneurship. Collaboration is at the center of Scenarios 4.0 and 5.0 and to get there, people must recognize their role in society and work harmoniously together to achieve success. Curaçao 2030 identifies a need to move from Shareholder capitalism, which prioritizes profit over all else, to Stakeholder capitalism which aims to increase the wellbeing of people and the planet.

Miguel tells me that when COVID-19 arrived in early 2020, it highlighted the fact that ‘normal’ was the problem and made the need for change more obvious than ever before. According to the Curaçao 2030 document, ‘The pandemic has shown that having a sustainable, well-diversified economy and a well-developed international economic network is needed’. Curaçao 2030 emphasizes the importance of digitalization in all aspects of life. Miguel notes that initiatives such as the recently launched, “At Home in Curaçao” program for digital nomads is an example of how Curaçao can benefit from connectedness. Another important aspect is the involvement of the diaspora in the future of the island. Instead of seeing emigration as a ‘brain drain’, we need to maintain the interest of locally born people and former residents who live abroad in the future of the island. They do not necessarily need to be physically here to contribute. Curaçao 2030 also identifies healthcare, health promotion and wellness as an area ripe for change, highlighting the need for more focus on preventative healthcare and the opportunity for Curaçao as a destination for medical tourism.

Miguel believes that it is important to set lofty objectives. “If we shoot for the moon, we might land among the stars”. In late 2020, Curaçao 2030 produced a moonshot document. (The term moonshot is inspired by the huge collective effort that culminated in the 1969 moon landing of Apollo, just 8 years after John F. Kennedy’s ‘We choose to go to the Moon’ speech at Rice Stadium.) The document sets out five ‘moonshots’ for the island:

He notes that developments are already underway on some of these moonshots. Organizations such as Carib Algae and Green Phenix are combining entrepreneurship with sustainability, and urban gardening initiatives like Kaya Kaya Urban Garden are showing people that agricultural self-sustainability is possible, even in the center of the city.

Miguel is keen to emphasize the fact that the Curaçao 2030 platform is inclusive, and everybody is invited to join. The Vision document is being continuously revised and updated, and those involved meet regularly online and contribute via virtual meetings and forums. Currently, most of those involved are mature people, probably because in many cases the younger generation is busy with their careers and raising families. However, for the program to maximize its effectiveness, it is important that everybody is represented. To get involved, visit the webpage www.curacao2030.net.