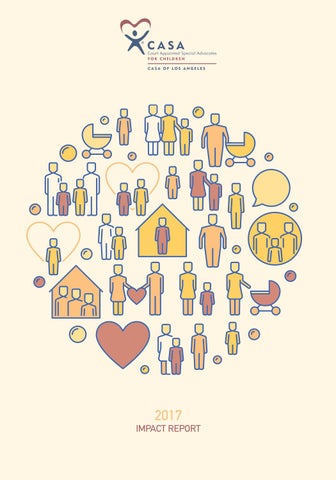 While this year brought new challenges and unexpected outcomes for many, for CASA of Los Angeles, Fiscal Year 2017 (FY17) was one of incredible growth and positive impact in the lives of the children we serve. Over the last several years, CASA/LA has made capital, technological and human investments in the hope of significantly impacting the lives of children in the child welfare system who have experienced abuse and neglect. In FY17, these investments paid off in a tremendous way! This year, we saw that investing in new recruitment and training staff, developing rigorous evaluation systems and enhancing our physical space and operations, not only led to more children served, but to greater impact in our community and on the child welfare system at large. For 39 years, CASA/LA has been the only organization in Los Angeles providing court-appointed advocates to children in foster care to help them navigate not only the trials of the courtroom, but also the trials of a challenged childhood. Being a Court Appointed Special Advocate (CASA) is unlike any other volunteer opportunity. CASA volunteers become a critical part of a young person’s life; a stable, steadfast adult who cares about the child over the long term without ever being paid to do so. Serving as a CASA is also a deeply rewarding and positive experience for the volunteer. CASA volunteers witness first-hand the consequences of poverty in our county’s most disadvantaged families and communities. They learn to recognize the challenges children face when they grow up facing trauma and neglect. By helping these extraordinary children succeed, CASA volunteers discover new purpose in their own lives. Last year, we set milestones in nearly every area: • We served more children than ever in CASA/LA history! A 17% increase from the previous year. • We trained 319 new volunteers and set a record for new volunteer recruitment! • As a result of our database and tracking, we were able to accurately measure the significant impact we make in the lives of the children and young adults we serve! • We ended the year in the black for the first time in three years without cutting staff!

The facts and figures looked great for CASA/LA in FY17, but the most important impact we made was in the lives of the children and youth served by our volunteers. CASA volunteers helped their children reunite with their families, helped them find permanent adoptive homes, helped them go to college and helped them receive the health care and education services they need. With over 30,000 children in Los Angeles County’s child welfare system, CASA/LA has much more work ahead of us. There are volunteers to recruit, train and support, and thousands more children, teens and young adults to serve. But we are off to a great start. With your help, we can work towards serving every child in foster care who needs a CASA volunteer. We thank for your support of our organization, and for your belief in the work we do. Sincerely,

Louis Lucido Chair, Board of Directors

IMPACT BY THE NUMBERS

Our Mission CASA of Los Angeles mobilizes community volunteers to advocate for children who have experienced abuse and neglect.

OUR CASA VOLUNTEERS In FY17, 744 people volunteered their time as Court Appointed Special Advocates (CASAs) for children in LA County’s child welfare system who have experienced abuse and neglect. They share a common belief: that every child deserves a chance to thrive in a permanent safe home and that CASA of Los Angeles can make a difference for the most vulnerable children in Los Angeles County. CASA/LA recruits, trains and supports CASA volunteers to work with each child individually to ensure the child gets the support and services they need. CASA creates a crucial connection—one caring adult to one child in need—that can be the turning point in a life that has been disrupted. Our most significant accomplishments happen every day—when an overlooked opportunity is found, a service is secured or an adult connection is made that will help to keep a child safe and give them an opportunity to succeed in life.

Our Vision A Los Angeles in which every child in the child welfare system has an advocate and the opportunity to thrive.

Getting to school was also a struggle for Crystal. Ernie let her Getting to school was also a struggle forwas Crystal. Ernieiflet her know that taking public transportation an option she know that taking public transportation was an option if she wanted to go to school. To ensure she got there, for three days, wanted to school. Towith ensure for three days, he rode to thegobus to school hershe untilgot shethere, was comfortable he rode the bus to school with her until she was comfortable on her own. Ernie was also in contact with her teachers and on her own.toErnie also in contact with hertoteachers and counselors makewas sure Crystal was on track graduate. counselors to make sure Crystal was on track to graduate.     Gradually, Crystal’s grades improved and she began Gradually, improvedfrom and continuation she began earning A’sCrystal’s and B’s.grades She graduated earning A’s and B’s. She graduated from continuation school in her junior year and was awarded “Most school in her junior before year and was awarded Improved Student” transferring to a “Most traditional Improved Student” before transferring to a traditional high school for her senior year. high school for her senior year.    Last year, Ernie was nominated for the CASA of the Year Last year, was nominated forfor theturning CASA Crystal’s of the Year award by aErnie children’s court judge life award by a children’s court judge for turning Crystal’s around and keeping the family together. The case waslife around keeping 2017, the family Thecontinue case was closed inand November andtogether. the children closed in November 2017, and the children continue to thrive with their grandmother. Crystal told Ernie that to thrive grandmother. told Ernie that while shewith wastheir relieved to be withCrystal her family, she was while she was relieved to be with her family, she was concerned that she wouldn’t see him as much anymore. concerned that she wouldn’t see him as much anymore. Ernie reminded Crystal that he was blessed to have her Ernie Crystal that hewhat wastheir blessed to havewould her in his reminded life, and that no matter friendship in his life, and that no matter what their friendship would only continue to grow. only continue to grow.

By having Lainie there, they were reassured of the By having Lainie there, theythat werea reassured the to process and found comfort CASA was of there process and found comfort that a CASA was there provide an unbiased opinion in the best interest of to their provide an unbiased the best interest of their child. Lainie was alsoopinion able to in create an open dialogue child. Lainie was also able create open between Mia’s parents andtoher greatan aunt so dialogue Mia could between Mia’s parents and her great aunt so Mia could benefit from similar parenting styles. benefit from similar parenting styles. Mia is now back at home with her parents and the Mia nowclosed back in at August home with her parents and the caseiswas 2017. case was closed in August 2017.

Court Court Appointed Appointed Special Special Advocates Advocates support support children children in in LA LA County’s County’s child child welfare welfare system system who who have have experienced experienced abuse abuse and and neglect neglect You can impact the life of a child who needs a CASA You can impact thethem life ofthe a child CASA volunteer and give hopewho of a needs better afuture. volunteer and give them the hope of a better future. The first step in becoming a CASA volunteer is The first step in becomingsession. a CASASessions volunteerare is held attending an information attending an information session. Sessions are held throughout LA County. Register online at throughout LA County. Register online at www.casala.org/volunteer or learn more by emailing www.casala.org/volunteer or learn more by emailing volunteer@casala.org. volunteer@casala.org.

Board of Directors (current) Louis Lucido, Board Chair

Trust Company of the West