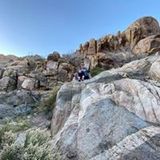 “Although Karl has been particularly beloved by those he teaches, he had always shunned the cult of personality, the Miss Jean Brodie syndrome, the temptation for any popular teacher to cultivate a group of slavish devotees—‘ducks,’ as Karl calls them—who waddle cheerfully behind you, caring more about what you think than about what you teach, caring more about eliciting your opinions than about formulating their own. No teacher I have ever met could have had a longer or more devoted line of ducks than Karl; no teacher I have ever met has more studiously avoided it.

From time to time, I have seen Karl astonished by the work of his students. ‘Listen to this,’ he will exult to the rest of us, and then read a passage from a particularly fine essay or term paper. ‘I wish I had written that,’ he will marvel—and genuinely mean it. There is not a trace of self-congratulation in this. It is never ‘look at what my student has done’; it is always ‘look at what this student has done.’ And there we have it: For all Karl’s devotion to the ‘life of the mind,’ it is not the life of his mind that he cares about most; it is ours.”

ERIC ZWEMER, FROM A SPEECH HE GAVE AT KARL KLEINZ’S RETIREMENT DINNER

dan smith ’87: I have very fond memories of Kleinz. He taught with a passion and enthusiasm and sense of humor that not only kept our collective attention, but actually engaged us. In art history, Dr. Kleinz would literally climb atop the podium, perched precariously on one knee with the other leg extended for balance, an arm raised in gesticulation or waving a pointer across the giant projection screen, sweat dripping from his forehead and soaking the armpits of his oxford shirt. It was education unwittingly disguised as performance art.

nini halkett, upper school history and social studies teacher: What standsout about Karl was his impressive intellect. History, art,music, politics—the range and depth of his knowledge wasastonishing. Karl famously had a record collection thatnumbered in the hundreds or maybe even thousands. Forme, as a relatively young teacher at the time, he was a littleintimidating because of the awesome reputation he had,but he was also funny and warm-hearted, and, of course,much beloved by his students.

This story is from:
Hw Life Spring 2018
by Agnes Pierscieniak