From Poverty to beekeeper: Beekeeping with Batwa people i Uganda 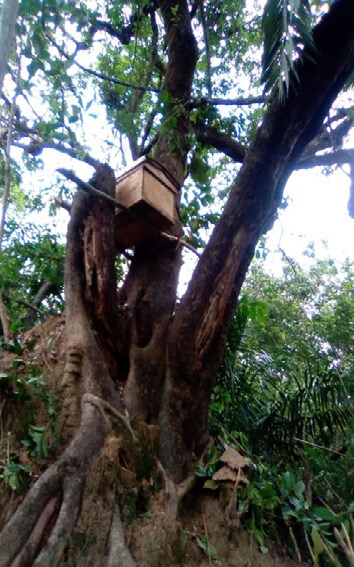 In November 2020 a new two-year beekeeping Project began in Uganda, funded by the Civil Society in Development, CISU (part of the Danish Ministry of Foreign Affairs). The Danish Beekeepers Association is responsible for execution of the Project in collaboration with a local NGO. The Uganda National Apiculture Development Organisation (TUNADO).

TUNADO is the umbrella organisation for beekeepers and people who trade with beekeeping products. They help with certification and organising beekeeping courses. The Project collaborates with Bees for Development, close partner organisation with TUNADO for many years, and includes their joint Project to ensure that disabled people have access to training.

The main objective is to help the Batwa who live in south-western Uganda, to improve living conditions through beekeeping. A further objective is to reduce local prejudice and discrimination against the Batwa and promote cooperation and integration.

The Batwa lived in small family groups without leaders and with common ownership of everything. Most families had fixed exchange relationships with the Bantu farmers, who lived outside the forest. The most important exchange item for the Batwa was honey from honey bees and ten species of stingless bees. The honey was exchanged for agricultural products, clothes and utensils. Beehives were not used; honey was harvested by ‘stunning’ the bees with smoke from a specific grass species. The Batwa lived in the rainforest for thousands of years in an ecological balance with no ruthless exploitation of anything - partly because they never collected supplies. Now the situation is completely different.

Today the Batwa pygmies are one of the most discriminated ethnic groups in Africa. About 35 years ago, their habitat in the forests of south-western Uganda was turned into National Parks. Rainforest areas had become smaller as a result of agriculture, and the last populations of mountain gorillas were threatened with extinction due to poaching and deteriorating habitats. It was therefore decided to create reserves for gorillas with the help of the World Wide Fund for Nature. The Batwa were banished from the forests, and the army was sent to force them out. If they tried to come back, they would be shot.

The government and several NGOs promised them compensation in the form of places outside the forest where they could build their huts, as well as schooling and medical care, but only few of the promises have been kept. As the Ugandan Government does not recognise joint ownership of land, there was said to be no reason to pay compensation for the loss of the forested areas.

There are about 6,400 Batwa living in Uganda. Two thousand have been banished from the forests, and now live in south-western Uganda outside the large gorilla reserves.

Today, most of these Batwa have to survive through begging and prostitution. 60% of children die before the age of five due to malnutrition and lack of health care. Discrimination is widespread and there is mistrust between the Batwa and local farmers.

To be allowed to build a cabin on a farmer’s land, the Batwa have to work as day labourers, poorly paid with little food and old clothes. They do not have opportunities to earn money for medicines and other necessities. Chronic food shortage characterises most Batwa households and Batwa often experience difficulty in finding permanent, well-paid employment due to their marginalised status and lack of literacy.

The Batwa are known for their knowledge of honey bees and stingless bees, however this knowledge is being lost. Beekeeping training will help the Batwa to make money, to gain a new local identity as beekeepers and to have the opportunity to organise themselves through TUNADO.

To reduce tension between the ethnic groups of the local community and local prejudice and discrimination against the Batwa, women and men from the poorest parts of the surrounding farming community also participated.

TUNADO is responsible for local education and organisation in the two districts of the Project, Bunyangabu and Kisoro. A permanent beekeeping instructor is employed, often supported by trainers from TUNADO. Smaller groups are taught in turn, as only five people can meet due to Coronavirus restrictions.

At the start of the Project we met with demands for payment to rent land for apiaries and a ban on retrieving bee swarms and hive materials from rainforest reserves. This attitude has now been reversed, as the Project has progressed and beekeeping has become a widespread topic of positive conversation. There has been a growing interest from some of the farmers, who have made Eucalyptus forests and other areas available for Project apiaries. It is recognised that bees are providing better pollination of their coffee and vegetable crops, and it is thought that the bees are protecting crops from destruction from wild animals including monkeys.

Through negotiation with the forest authorities, TUNADO has succeeded in obtaining permission for the Project participants to collect swarms and hive materials free of charge from the rainforest reserve.

Through negotiation with the forest authorities, TUNADO has succeeded in obtaining permission for the Project participants to collect swarms and hive materials free of charge from the rainforest reserve.

In beekeeping development projects, it is absolutely crucial to teach how to ensure that bee hives are populated by honey bee colonies. Swarms must be caught in swarm traps, and it is uncertain if it is possible to obtain enough bees for both students and for teaching. Fortunately, this has gone very well. By the end of October 2021, 200 hives were made and placed in apiaries and, half of them are colonised. Some hives have been made that will be sited later after the rainy season, which is a period with few swarms.

The first honey harvest has been sold, and some Batwa have started selling homemade hives to people in the area on their own initiative.

Ninety-two Batwa and 54 Bafugas (farmers) are currently participating in the training. At the beginning of the Project, the use of honey bees was taught, and now lessons in the use of stingless bees, of which there is particular interest from the Batwa, has started. Honey from stingless bees can be sold for a much higher price than honey from honey bees, however each colony produces only 0.5-5.0 kg per year. Local honey bees produce 5-15 kg a year.

The Project has got off to a good start. We are already training all the beekeepers promised in the application, a large number of hives have been produced and are colonised, honey production is underway, TUNADO is doing a good job and there is great cooperation between the Project partners.