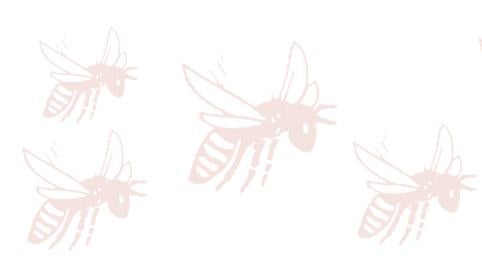 The organic labelling system (according to chemists organic simply means ‘containing carbon’) enables people at the ‘bee friendly’ end of the range to extend a little way towards the ‘bank balance friendly’ end without compromising their standards too much. This is because many customers are prepared to pay much more for an organic product even though they probably cannot taste any difference.

As I understand the organic ethos, it is to work with nature, rather than against it and to resist the creation of yet more deserts caused by industrial agriculture, beekeeping being only a small part of their range of interest. As pointed out in BfDJ 96, there are international organic standards which are adapted and applied locally.

This may explain why, in the UK, the Soil Association standards appear to have been translated from a foreign language by a non-beekeeper. Where else would you find references to ‘male brood’? Why do they think that crystallised honey is unsuitable for feeding to bees although our bees have been using it for many thousands of years? Even if the beekeeper thinks it might be a little ‘chewy’ s/he could always add water in the same way as non-organic beekeepers would with bag-sugar. The UK Soil Association does approve of feeding bees with organic molasses – a certain recipe for diarrhoea and thus spread of disease including Nosema.

The UK Soil Association also states: ‘You should encourage resistance to disease and prevent infections by: [among other things], renewing the queens regularly’. There is no explanation as to how this helps or what is meant by ‘regularly’. I renew my queens regularly every five years whether they need it or not (not really – a four year old holds the record in my apiaries), as longevity of the queens in colonies that are satisfactory is an indication of health and disease resistance, and the offspring may have inherited the useful longevity trait. So ‘regularly’ is not to be confused with ‘frequently’.

Looking at the article in BfDJ 96 (see further reading), clearly Mr Staples in Chile is in the ‘Bank Balance’ end of the range: he needs to make a living from his bees, but has ambitions to become organic. Bailey (1984; 1986) described how the worst enemy of a hive of bees is - another hive of bees - because problems multiply in apiaries, and especially in large apiaries.

This was borne out more recently by Seeley (2007). His widely separated colonies, although infested with Varroa mites, were able to cope without treatment, but when these bees were aggregated in apiaries, they succumbed.

Doubtless Mr Staples and other commercial beekeepers need, for economy of scale, mechanical handling and to meet the demands of pollination customers, to keep hives much more tightly clustered than is ideal from the bees’ point of view, and so a compromise must be found if organic standards are to be met.

Mr Staples cites the problem of an outbreak of Nosema after moving large numbers of apparently healthy colonies (he does not say how many but refers to ‘one block of 600 bee colonies’ so I would guess he moved thousands). The Nosema did not appear out of thin air: the colonies had it already but it became a problem only after the move. Maybe it was the move that caused the problem: being shut up and stressed by the move would have caused defecation within the hive. This would have been cleaned up at the first opportunity by the bees, using their tongues, at the same time food sharing and feeding the babies using the same tongues. Thus a few bees with Nosema become very many bees with Nosema.

What, organically, can be done to stop the same thing happening again? How about, instead of moving the hives, move the bees as packages, installing them at the other end in empty hives with brood frames fitted with starter strips? Drawn comb (preferably sterilised with acetic acid) could be in the supers above the queen excluder. The bees would, at first, have no brood to feed and nowhere but the supers to place honey, maximising the crop. There would not be any brood comb to contaminate until they had drawn some, giving them a chance to ease their bowels outside first.

What to do with the brood that the bees left behind when the bees were packaged? Use it to reinforce selected colonies in the home apiary for queen rearing and nucleus raising for replacements and sale. This could be the start of Mr Staples becoming the first organic producer of queen honey bees in Chile. No doubt, if Mr Staples is reading this, if he is not howling with mirth or with rage, he would consider trying these ideas out on a small-scale before venturing further.

Mr Bröker writes that “under European conditions organic apiculture seems to work”. Europe is a big and varied place and he may well be correct in parts of it, but I cannot think of anywhere in my part of the continent (the southern half of the UK) where it would be possible to keep bees organically, following the UK Soil Association criteria.

He mentions the disastrous effects of distributing queens across climate zones and hemispheres. The examples he cites are well known. Here is another waiting to happen: we are importing queens into Europe from Argentina, a country where the Africanised bee has been known since 1965.

I conclude by echoing BfD’s point that swarms, resulting from bees doing what comes naturally, ought to be regarded as organic.

BAILEY, L. (1984) The effect of the number of honey bee colonies on their honey yields and diseases. Central Association of Beekeepers, UK.

SEELEY, T.D. (2007) Honey bees of the Arnot Forest: a population of feral colonies persisting with Varroa destructor in the northeastern United States. Apidologie 8: 19-29.*