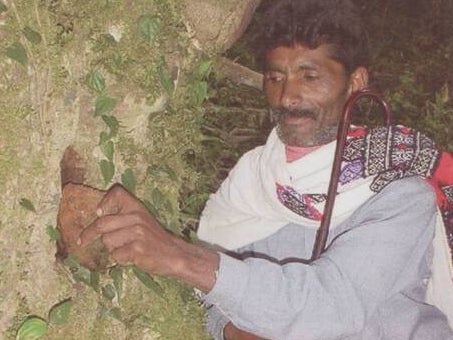 Nature conservation is a threa...

Honey hunting evokes images of death-defying acts. Honey is valuable, and the process of harvesting it is fraught with danger: this has led to myths and legends, so that folklore, superstitions and stories Surround honey hunting.

The Nilgiri Biosphere Reserve (NBR) has a tradition of honey harvesting. Forests here are accorded a high degree of protection, resulting in an abundance of flora and fauna. The dense forests and steep escarpments provide natural nesting places for the giant rock bees - Apis dorsata. These are also the ancestral home of adivasis - indigenous people.

The honey hunters of NBR are renowned for their bravery and skill. Numerous adivasi groups hunt honey and each has their own specialised methods. The Alu Kurumbas in the eastern and southern parts of the Nilgiris and in Attapady, are renowned for scaling 150 m high cliffs, while the Kasavas and lrulas are adept in harvesting large quantities of honey from giant trees. The Kattunaickens are expert hunters in and around Mudumalai and Muthanga forests, just as the Jenu Kurubas are famous in Nagarhole and Mysore regions. In addition, the Cholanaickens (see pages 8 and 9) are renowned for their legendary Skills in the New Amarambalam Region, using basic equipment to scale high trees and cliffs.

Although geographically adjacent, the groups have formed specialised skills that differentiate one group from the other. For example Kurumbas and lrulas often share the same village but one is an expert on rock hunting while the other is a master of scaling trees. This has resulted in specific ‘honey territories’ and locally adapted methods of collection.

When honey hunting starts, legends, rituals and superstitions play an important part. The actual time for hunting is usually reached by consensus among villagers. It is now that they declare that the comb is ripe and the hunt must start. Preparation begins in earnest. Days before the harvest, the honey hunter begins to fast, praying and bathing with regularity. Any relationship with women is avoided. Observance of these austerities varies between groups.

Adivasis worship their gods before setting out. Spirits are accorded special status during this period, as there is a belief that disturbing or angering the spirits can lead to an unsuccessful hunt or even a death. The village priest is consulted and it is he who fixes the date and time for the harvest. He conducts a puja invoking the gods and ancestors, praying for their blessings. This signals the start of the entire honey hunting process. The honey collecting ritual also includes an invocation to the bees to leave their combs so that honey can be collected, beseeching them to return to bring forth the blossoms in the forest and fields. Traditionally certain cliffs have been venerated and marked as sacred — there is no harvesting of honey from bees nesting on those cliffs.

Preparations for honey collection take place by estimating the height of the cliff or tree and getting the climbing gear ready. Usually for a cliff hunt, a rope ladder has to be made from forest vines using fresh fibre. A bundle of dried twigs are tied together with a cover of green leaves, to make the smoker. Baskets are made of bamboo. High trees are climbed by either cutting steps into the bark, or tying a bamboo pole on to the tree trunk. Variations in these methods exist across the different communities.

Honey hunting takes place late in the evening or early morning, when the sun is not bright. Thick chunks of honey comb are collected in buckets or tins and the honey drained from the comb.

Keystone has made interventions with these people in the fields of sustainable harvesting, hygienic filtration and processing of the honey, quality parameters, improved marketing and value addition.