The birth of Itumbauzo Beekeepers Association 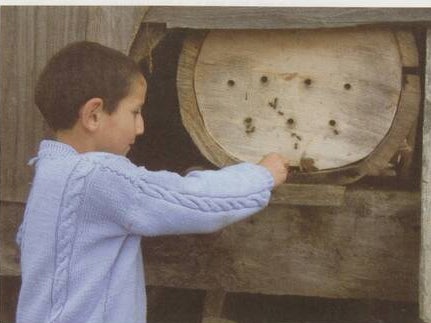 Itumbauzo is a kingdom in a rural part of Abia State, south east Nigeria. Villages are nestled in hilly vegetation one hour from the nearest town. Most people live in clay dwellings and sustain themselves through farming. There is also small-scale palm oil processing, logging and some cocoa farms: the latter bring little income due to the low price of cocoa. The prospects for local youth are limited and most expect to continue with subsistence farming, with little additional income. For years have lived at Amaudo, a rehabilitation community. The nearby village, Moukwa, was the donor of land for Amaudo. | attended one of their regular Youth Association meetings and presented my proposal to train a group in beekeeping.

Although honey was a much desired product, beekeeping was not practised in the area and it was a revelation for the people that they could 'keep bees’. The suggestion was eagerly accepted and four trainees were nominated by the Association - another two joined from other villages. The first task was to find local expertise: of beekeeping in London was not adequate preparation for tropical beekeeping. I turned to Bees for Development , (an organisation had admired and supported for many years), who put me in touch with Israel Onyemaechi, an entrepreneurial beekeeper based in Umuahia. I realised that local management methods involved much less manipulation and  handling of the colonies and bees than I was used to. Queen rearing and re-queening were not practised. Despite the reputation of the ‘defensive’ African bee. I felt safe in my protective clothing.

Israel explains: "Polly was given my email address by BfD, and we arranged to meet at my home. The first meeting with Polly and her husband that day was quite thrilling and interesting, and led to our collaboration to start up the beekeeping project in Itumbauzo. Weekly training sessions began in May 2005. The training involved practical sessions that took us to the apiaries of Apitherapy Ventures, and included videos of other beekeeping activities’. Israel is passionate about beekeeping and conveyed his belief that: "Beekeeping is one of the ventures that can be practised by anyone who is interested, regardless of academic background and gender".

Funds were raised by our friends overseas who were invited to ‘buy a hive' or ‘equip a beekeeper’. Gradually each member of the project was supplied with five hives and basic equipment of smoker, hive tool, and clothing (veil, garment and boots). We started using a mixture of frame, standard and long top-bar hives, so the beekeepers could gain experience and see which design was best suited to their environment. The main method for acquiring colonies in this area is to bait the hive with honey or bee plants every few days, and wait for a swarm to arrive.

In further efforts to ensure the sustainability of the project we organised a Hive making workshop. Timber is readily available in Itumbauzo and one beekeeper was already trying to construct his own hives. Two facilitators taught basic carpentry skills, and designs were given for top-bar hives and a swarm catcher box.

The trainee beekeepers were encouraged to formalise themselves as a group. This would help them to support each other as well as being as strong voice for honey marketing and beekeeping in the area. The Itumbauzo Beekeepers’ Association was formed and a constitution developed. The Association was donated a small piece of land in Mbukwa village, to build a store and house for harvesting. The group also have plans to involve more members of the community through a simple ‘buddy’ training system ~ each beekeeper has a helper who accompanies them and is gradually trained in practical skills. By the end of 2006, 10 of the 30 of the hives were occupied and we look forward to a good harvest this year!

Polly Eaton is a British occupational therapist with Amaudo Itumbauzo, a charity working with homeless, mentally ill people based in a rural part of Abia State, south-east Nigeria. Polly returned to the UK in March 2006, and will send us further news when the Association's honey factory - a bee safe room for pressing and - bottling honey is established.