Zoom in on Panama 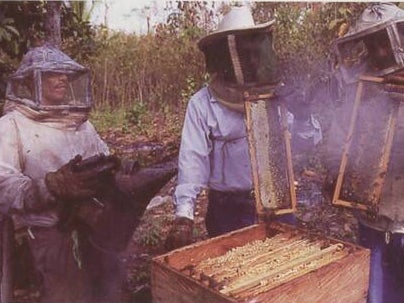 Panama is strategically situated on the narrow isthmus connecting Central and South America. The Crossroads of the Americas is 675 km long and only 50-120 km wide. There is a central mountain chain with an inactive volcano peak of 3475 m. On the Pacific side the climate is seasonal with rains from October to January. There is more rain on the Atlantic side with drier conditions from February to April and August to September.

3,000,000 inhabitants that include three indigenous American cultures in the Eastern Kuna and central Choco portions of the Darien, the eastern third of the country bordering Colombia, and in the central mountain Half the population lives within 12 km of the Panama Canal that bisects the country and primarily in the capital Panama City.

Although agriculture is the occupation of 21% of the population it gains only 7% of the GDP Exports include banana, coffee, corn, palm oil, rice and sugar cane. The EU and USA are major trading partners. In-country crops include beans, Citrus, onions and vegetables.

European honeybees Apis mellifera were introduced into Panama in the early 1800s. The GTZ development programme in 1971 estimated 3,200 beekeeper-maintained colonies and built a training and wax and honey processing facility in Davisa. By 1982 when colony numbers had increased to 21,000, managed by 369 beekeepers, Africanised bees arrived. In 1989 colony numbers had fallen to below 4,000 before numbers slowly increased to reach 7,000 by year 2000.

In areas of human disturbance, corn and palm represent major pollen sources and living fences of several tree or shrub species provide excellent bee forage. There is some forage on sugar cane stalks after cutting and Citrus is a rich source at plantations. Roubik (1984) conducted a major analysis of nectar and pollen sources of Panama. There are some cucurbit pollination rental opportunities (mainly melons) in western Chiriqui Province.

Virtually all Panama's beekeeping is along the Pacific side of the central mountain chain with the Azuerlo Peninsula and western Chiriqui Province (bordering Costa Rica) the best territory. Prior to the arrival of Africanised honeybees, 12 large-scale beekeepers held the majority of the colonies, with one individual collecting honey for export to Germany. By 1990there was too little honey to meet internal markets.

There are now three commercial beekeepers. One of these keeps European bees on Perlas Islands in the Bay of Panama by regular requeening with European queens imported from Hawaii. A few hobbyist beekeepers remain, but the GTZ-training facility and other training efforts at technical schools have been terminated.

A number of unsuccessful efforts have tried to improve the Africanised honeybee temperament and/or to introduce European queen honeybees. Ministry of Agriculture extension and research programmes have attempted bee breeding using selected stock in Panama with imported queens. At least one commercial beekeeper has attempted to keep European bees and raise queens in the higher elevations of Chiriqui Province to avoid defensive Africanised bees. All have proved unsuccessful.

Recently Varroa mites were detected in Panama with the highest levels in Chiriqui Province. It is likely that it is the importation of European queen bees that is responsible for this infestation.

The Delaware/Panama Partners of the Americas under a Farmer-to-Farmer Programme with USAID funding started an Africanised honeybee recovery/retraining scheme in the centre of the country (along the Panama Canal region) and western Chiriqui Province in the 1980s. The Scheme was recognised with an award of excellence by the Kellogg Foundation in 1995 after helping increase colony numbers and beekeepers by 15%. Tom MacCormick, a side-line beekeeper in western Pennsylvania, has continued an individual training effort to improve beekeeping and has organised several beekeeping tours of Panama. The Chiriqui beekeepers and those in Bocas del Toro, the most western Atlantic Province, have recently organised co-operative marketing.

Thanks to Dewey Caron from the Department of Entomology & Wildlife Ecology, University of Delaware, USA for providing the information and photograph.