The Multi Agro Beekeeping Centre, opened cattle ranching. In second place comes in September, is working with 2,567 agriculture and much of this is growing beekeepers. This year, of 14 tonnes of cattle feed. The deforestation rhythm in honey harvested, half was retained to feed to the bees. Centre Director, Roza Tsarukyan, says honey will be exported in the future, and they have plans also to export pollen and medicines.

The 2005 edition of the Guinness Book of

Records will be published in November with an embarrassing record for Brazil: it has the world's highest deforestation index. The annual forest loss was 22,264 km?. Brazilian researchers confirm the information. Amazonia lost 17% of its forestry cover, principally in the last 50 years. The researcher from the National Spatial Research Institute, Carlos Nobre, admits that Brazil has the largest deforested area with respect to the size of the country. Dalton Valeriano, who continually monitors Amazonia deforestation, states that the most common

use for deforested lands in the region is cattle ranching. In second place comes agriculture and much of this is growing cattle feed. The deforestation rhythm in Amazonia has registered growing rate in the last five years. In 2002/3 for example, the area deforested was 23,750 km2. In the period 1977-1988, only 21,050 km2 were cut down.

Everything has been destroyed by five years of war - the groups who had 200 hives now have less than 20. In the forests, where only Land Rovers or Hilux vehicles can go, the beekeepers burn the area to get the honey and thus destroy the honeybee colonies. The new NGO, APIFLORDEV (of which | am a member), is preparing two projects to develop beekeeping near the frontier with Gabon. Many women and pygmies want to become true beekeepers. The equatorial forest can give great quantities of honey, but the villagers do not eat it because the price is too high for them. The EU and

Find Your Feet with top-bar hives

Swaziland is a small, resource-poor country that suffers from an extremely high rate of unemployment and poverty. These problems are most acute among rural communities because of limited access to livelihood opportunities, land, water, sanitation and education. Find Your Feet (FYF), an international development charity, is working with the organisations Vusumnotto (meaning to restart the economy) and Lujilo Lwamaswati (Swazi Beekeepers' Association) to promote beekeeping and honey production. Because of low start-up costs and the rapidly increasing market for organic honey, beekeeping is proving to be a lucrative and sustainable small business activity. The indigenous. honeybee species Apis mellifera scute is present throughout Swaziland. Traditionally, honey collectors would smoke out wild bees from their nests by using burning sticks or rags: this often resulted in fires that destroyed large areas of forestland. The FYF programme encourages the use of smokers that greatly reduce the risk of fire hazards.

Local people have also been introduced to the idea of 'putting bees into boxes'. Two different kinds of hives are used in the programme: top-bar hives and Langstroth (frame) hives. The top-bar hive is popular because it is easy to build, simple to use, and can be made locally using readily available materials. So far more than 3,000 people have received training in beekeeping skills: hive construction; honey harvesting and processing; packaging and marketing of honey; sewing protective clothing; and small business management. The money generated through the sale of the honey is giving local people the chance to improve their standards of living and means that they can now afford to send their children to school. Sibhulutja Sabomake Association consists of 15 women, nine of whom are widows. Group Leader, Phumsile Vilakati, is impressed by the new employment opportunity: “In my local village, many people don't have jobs. A lot of women have suffered from the deaths of their husbands and find it very hard to support their families. A group of us got together to try to find a solution to this problem, and we decided that it was a good idea to start working with bees. We didn't have much money to set up businesses, but beekeeping was within our means. We joined the programme and were told to form a community group so that training and support could be given collectively to a number of women. We were then trained by the Beekeepers' Association. At first we harvested only a little honey, but now things have progressed and we have built 30 hives. Income from honey sales is supporting us. We make sure that we reinvest some of the money into or community group so that we can struct more hives. We like bees and are motivated by the opportunities that they provide to us".

Greetings from the miombo woodlands

In previous years, beekeepers had difficulty in marketing their honey. However, since 2003 the situation has changed in favour of beekeepers. The price of a bucket of honey (weighing about 28 kg) went up from Tsh10,000 (US$9.5) in 2002, to Tsh15,000 (US$14.2) in 2003 and now (September 2004} to Tsh20,000 (US$19). By December this year the price is likely to be Tsh25,000. These are the prices offered to beekeepers in the villages of Tabora Region. In Tabora town and nearby towns the price varies between Tsh24,000-28,000. In Dar-es-Salaam, Arusha and Mwanza the price is higher. Business people travel to the villages looking for honey at competitive prices. This is further good news for the beekeepers. Part of my work is to attract as many buyers as possible. In addition, many Tanzanians are increasing consumption of honey in their daily meals and in medicines.

Ten orphaned children from Shazhaume Primary School registered with Kutsungirira Beekeeping Club (KBC) for beekeeping training during their school holidays in April 2004. The course began with a video showing beekeeping in different countries. The children walked 20 km with adult beekeepers, to Neshuro, to watch and discuss the film. After two days the location moved to my apiary for six more days. We covered colony management, equipment and its construction, colony life and health and business management. In June the children met for another six days at KBC apiary for plenty of honey harvesting, processing, packaging, product making and marketing.

Thanks to the support of St Henricus School in The Netherlands, ten Shazhaume children each received beekeeping training and a hive. Support for the purchase of more equipment and hives would be highly appreciated. These children are without enough food, clothes, shelter and school fees, as a result of the loss of their parents due to AIDS, constant droughts, floods and prevailing economic hardships.

In September about 120 queens from the USA were imported into Portugal. Two days after the queens were introduced to the colonies the national vet-lab found 2-3 eggs and larvae of the small hive beetle Aethina tumida in the queen cages. The colonies were burned and all ashes and remains buried a metre deep. The soil was disinfected 30 cm deep and 4 m to the front and back of the hives. The beekeeper covered the ground with a transparent plastic foil so beetles emerging from the soil could be trapped and identified. The foil will be kept in place for several months. In my opinion there is a realistic chance to avoid further distribution of the beetle in this way. The EU has stopped all importation of bees from the USA. Queen bees are only allowed to be imported from the 65 countries listed in the EU rules. However, this is restricted to those countries where the small hive beetle is an officially recognised disease/predator. Dr Wolfgang Ritter, German National Reference Laboratory for Bee Diseases 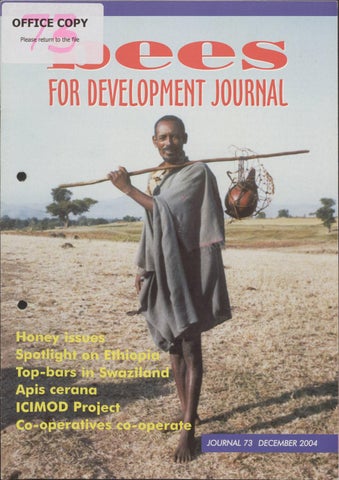