Varroa jacobsoni and Apis cerana in the Solomon Islands 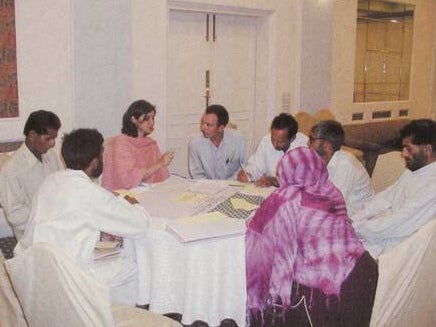 Varroa mites and Asian honeybees Apis cerana were discovered on the islands of Guadalcanal and Savo in March 2003. Dr Denis Anderson, a world expert on Varroa mites, visited the Solomon Islands to investigate.

Dr Anderson identified the mites and the bees as the same species that are found in Papua New Guinea, which is probably from where these intruders came. Until recently it was thought that this was the same species of mite that has been killing bees all over the world. Not so, according to Dr Anderson. "The mite is not the problem in the Solomon Islands", says Dr Anderson. "This species of mite, Varroa jacobsoni, cannot reproduce on the European honeybee, so the population will never increase to the point where it will hurt the bees". This is good news for the Islands’ beekeepers. However the die off of honeybees on Guadalcanal and Savo remains to be explained. Dr Anderson believes the answer to this mystery is the Asian honeybee, which has found a new home in the Solomon Islands. "This Asian honeybee, Apis cerana, is a tropical species that under these conditions is defensive, swarms and spreads quickly, and is better suited to the climate and flowers of the Solomon Islands than the European bee", explains Dr Anderson.

Following his visit to Guadalcanal, Savo, Western Province and Malaita, Dr Anderson met with representatives of the Solomon Islands Ministry of Agriculture, the honey industry, bee farmers and project funders to explain his findings and to discuss what actions could be taken to help protect the honeybee industry from this new threat. An action plan was drafted at this meeting to attempt to halt or slow the spread of the Asian honeybee, and to begin work on its control. Industry stakeholders appear to be united and willing to work together to find solutions, once the problems have been identified.

Denis Anderson adds (July 2004) "! can confirm that the bee in the Solomons is the Java haplotype of Apis cerana and the Java haplotype of Varroa jacobsoni. Seems like that particular Apis cerana has become invasive after being introduced to New Guinea from Indonesia in the late 1970s. It regularly turns up on boats at Australian ports, and | suspect it is only a matter of time before it gets into Australia - it has spread through all New Guinea and to off-shore islands, and now arrived in the Solomons".

Varroa is a genus of mite that are parasites of honeybees. The natural host species of Varroa destructor (previously known as Varroa jacobsoni) is the Asian honeybee Apis cerana. Apis cerana has a natural defence mechanism to protect itself from Varroa destructor. However, when Varroa destructor transfers to colonies of the western honeybee Apis mellifera, the colony will be killed. The mite species Varroa jacobsoni also occurs in Apis cerana, but does not survive when it is transferred to colonies of Apis mellifera. Varroa mites depend upon adult bees for transport - they cannot survive for long outside a honeybee colony. However it is beekeepers, moving bees over large distances, often unaware of the mites’ presence, which has lead to this problem. The mites are now present in Apis mellifera colonies in every continent - the only remaining exceptions are most African countries, Australia, and many other islands.