Zoom in to Nicaragua 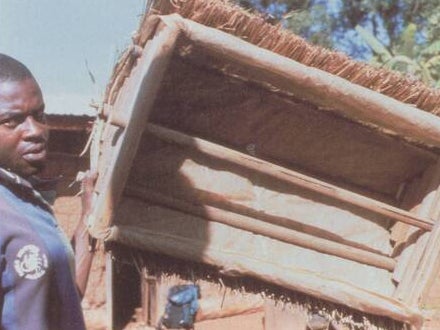 The biggest country in Central America, Nicaragua is a land of lakes, forests and volcanoes. Its famous lakes cover an area of 9240 km² and make up Central America's largest reserve of fresh water. Lakes Nicaragua and Managua cover 10% of the country's surface. There are 58 volcanoes, of which six are still active.

A series of economic crises, the civil war during the 1980s and 1990s, as well as a variety of natural disasters including Hurricane Mitch in October 1998 have reduced Nicaragua to the second poorest country on the continent after Haiti. In 2002 income per capita was under US$550. 25% of the child population is suffering from chronic malnutrition, and in some regions like Matagalpa this figure rises to 50%.

The local bee 'jicote' Melipona beecheii and Trigona sp were kept long before the arrival of the Spanish conquerors in the 16th century. Insects are very much a part of the country's tradition. For example, to prevent bad luck from entering a house, a nest of 'saltecon' Trigona sp is placed over the front door. The bee symbolises sunlight. Honey produced by jicote’ bees was  highly respected as a medicinal product. It was harvested from swarms in the forest and from local style hives. Today unlike other countries such as Brazil and Venezuela, this bee is used very little in Nicaragua, but new interest is needed because of all the advantages it offers.

Two types of honey are offered for sale by hawkers in the streets of Managua. One honey is from Africanised honeybees and type is more expensive, because of its rarity and renown for great medicinal virtues. It is used to cure conjunctivitis by putting a few drops of honey directly into the eye. In some regions of the country, mothers rub a cloth impregnated with honey on their baby's tongue to get rid of parasites in the mouth. In other regions, new mothers ‘purify their blood! just after giving birth, by drinking large amounts of herbal tea made from 'jinocuago' bark and sweetened generously with ‘jicote' honey.

Beautiful ladies follow the tradition of using a beauty mask made of jicote' honey mixed with powdered milk. Another interesting use is to get a young horse to willingly take the bit by smearing it with honey.

European honeybees were introduced into the Pacific costa region in the 14th century by German settlers who wanted to increase coffee production by improving pollination. In the 1960s the national agricultural programme developed beekeeping and in 1980 the Canadian government collaborated in development with the NIGO CARE.

In 1984 the arrival of the first swarms of Africanised honeybees radically changed beekeeping methods and work habits.  Beekeepers had to adapt to this new bee, which was much more defensive than the European bee.

Traditionally, hives were kept close to houses or in the garden. However, with Africanised bees, hives had to be moved to a safe distance and the size of smokers doubled. Strangely enough, after the initial adaptation period, even if the number of beekeepers has fallen slightly, the number of hives has on the other hand increased. The most surprising result has been the notable increase in honey production per colony: from 10 kg to 30 kg per year. In the central region of Boaco, and to the north of Chinandega, production reaches 75 kg with well-managed colonies.

As long as beekeepers protect themselves well and are equipped with adequate smokers, beekeeping remains viable. if Africanised bees have shortcomings including defensiveness and desertion, they also have many good qualities.

The bees are slightly smaller than European races of Apis mellifera but adapt well to hives with frames. The distance between the axis of the frames needs to be 31.8 mm instead of 34.9 mm for European bees. Worker cells measure 4.8 mm whereas the diameter of European worker cells is 5.3 mm. The size of queen and drone cells is the same for Africanised bees as European bees.

Beekeepers may have to feed up to 5 kg of sugar per colony to counter one of the characteristics of Africanised bees - absconding when stores run low. It has to be noted that most beekeepers make the mistake of not leaving enough honey when they harvest, blaming Varroa for winter losses when in fact the bees absconded.

Theft is the most serious concern faced by beekeepers. This problem continues to grow, making beekeeping difficult especially during the production season. Theft usually takes place at night when the hive is knocked over and the frames full of honey are taken, or the whole hive is stolen. Beekeepers must keep watch in an organised manner to protect their hives.

Africanised bees are strongly resistant to brood diseases and beekeepers need only to control Varroa. Currently it appears to be adequately controlled with the use of thymol crystals: two applications a year of 200g per colony. The melted crystals are simply put in a metal lid on the bottom board of the hive during June and again in September.

Nicaragua has very few areas of extensive crops requiring insecticide spraying and the farming community does not have enough money to buy herbicides. As a result, beekeepers prepared to respect a few rules of apiary management can easily produce organic honey.

Except for Varroa treatments there are no other real constraints for organic beekeeping - everyone extracts their honey, recycles their own wax and makes their foundation at the production cooperative in Baguas, Albisuris. It goes without saying that the interior of hives made from wood from the ‘pochote' Bombax ellipticum tree should not be painted. Producers interested in the export market cannot feed with sugar. The collection centre in Boaco, APIBO, is situated in the middle of the country and allows beekeepers to market organic honey at a price of US$2 per kilo. Most is exported to Italy and Germany. Each producer has to provide a minimum of 300 kg (44 gallon drum) to ensure traceability of the product - the producer can be identified if there is a problem.

As well as providing a guaranteed market, the collection centre allows its 53 members to purchase thymol and other equipment and offers technical advice. During 2002, APIBO exported six containers each containing 70 drums of organic honey, and sold 15 tonnes of ‘ordinary’ honey on the local market. Even if 'jicotes' produce small amounts of honey (5 kg/colony) the honey sells for three times the price of honeybee honey, especially during Holy Week. The honey is highly scented with a higher moisture content of 34%, compared with the 18% of Africanised honeybee honey. Stingless bees also offer the advantage of being quite happy in a simple wooden box without frames, and do not require any anti-Varroa treatment. What is more, children can learn how to handle insects and sell the few kilos of honey at a good price.

Beekeeping is indisputably a highly lucrative alternative for numerous small-scale farmers in Nicaragua. The environment is suitable for producing the quality and even organic honey that is lacking on the world market. Investment in beekeeping remains greatly inferior to all other areas of agricultural production. With regard to the defensive nature of Africanised honeybees, the solution of selective breeding for gentleness is preferable to importing European bees.

Dimas Perez is a beekeeper.

"I do migratory beekeeping in the ‘campanilla’ once a year. I do not have transport so I hire a small truck with a driver to take me 40 km, near Boaco. It costs me US$37 per trip, but in two months I harvest up to 40 kg of honey per colony. The land where I put my hives is watched over by the owner and costs me US$34".