Information from ICIMOD - revival of Apis cerana populations in the Himalayas 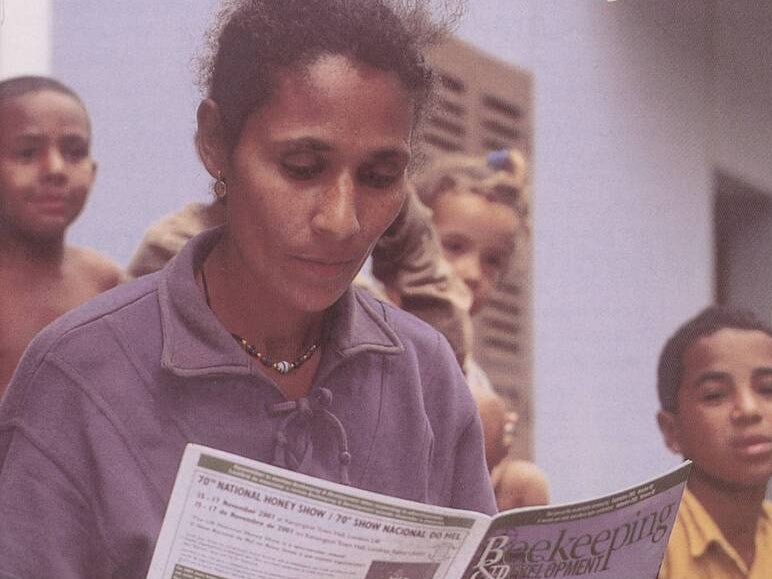 This is the sixth article in the series bringing news about the work of the Austrian Government funded beekeeping project at ICIMOD in Kathmandu, Nepal. ICIMOD and Austroprojekt GmbH in Vienna, Austria jointly manage the project. In BfD 62 we told you about women and beekeeping in Nepal. Here we tell you about our success in reviving Apis cerana beekeeping in mountain areas of India and Pakistan.

Ten years ago it was reported that the indigenous hive bee Apis cerana had all but disappeared in Pakistan and could be found only in a few villages in the north of the country. The disappearance of this bee, and of the services it provided in terms of pollination, was a matter of concern for ail bee people. (The advantages of Apis cerana particularly for pollination of plants and early flowering crops in high mountain areas were described in BfD 58). The disappearance of Apis cerana was attributed in part to the effects of Thai sacbrood virus, to government policies, and to the lack of promotion by state agencies and NGOs. But the Pakistani beekeepers themselves were equally responsible; few people thought of bees except in terms of honey, and most beekeepers preferred Apis mellifera as it could be managed to produce more honey. Until 1980 Apis mellifera was little known in Pakistan and beekeepers kept Apis cerana: within ten years, the species had been almost forgotten!

The Indigenous Honeybee Project at ICIMOD embarked on a process of encouraging all stakeholders - beekeepers, government agencies, extension workers - to refocus on the indigenous hive bee. The Project joined with the Honeybee Research Institute (HBRI) of Pakistan to carry out research on the population status of Apis cerana and introduce development interventions for its promotion. The results have been impressive:

- An Apis cerana selection programme focusing on action research was initiated at HBRI with the aim of selecting Apis cerana that produce more honey and have the characteristics preferred for domestic management.

- The expertise of Apis cerana technicians was streamlined into the development efforts; gender-balanced training programmes are now being organised to support the extension efforts at community level.

- The beekeepers in north Pakistan, the gene pool area of Apis cerana, have been happy to see the change in the focus of policy and development efforts at HBRI. Some have realised the advantages of keeping Apis cerana as a ‘stationary’ bee in addition to migratory hives with Apis mellifera, and farmers have again started to keep bees to help their crops and boost income.

- The Apis cerana programme is now so strong that it not only supports the provincial programmes of beekeeping but also provides expertise and technical backstopping to ICIMOD’s Indigenous Honeybee Project.

Apis cerana bees can now be seen in many parts of north Pakistan. They are clearly visible on flowers, where, slowly, they are even outnumbering Apis mellifera. Farmers report that log and wall hives are being reoccupied. This underlines the extraordinary strength of this bee species, which can maintain itself under difficult circumstances and returns to previously inhabited areas naturally as soon as conditions are favourable. Independent of the development efforts, it seems that Apis cerana is recovering from the pressures associated with the introduction of Apis mellifera and the use of pesticides. There has been similar success in the hills of Himachal Pradesh, India, where our partner institution, Dr YS Parmar University of Horticulture and Forestry, is focusing on promoting Apis cerana for pollination and biodiversity conservation, even where Apis mellifera is kept for honey production. Beekeepers, apple growers, and extension workers are being trained in the management of Apis cerana and its role in pollination and as a means of income-generation.

These efforts are supported by an ongoing selection programme, which includes an action research component. Already, the benefits are showing. There has been an increase in the quality of apples and the bees have helped in activating the replenishment cycle. Seeing the results, farmers are now motivated to use integrated pollination management as a tool for improving ‘eco-services’ and enhancing agricultural production, particularly of apples. While development efforts are being carried out, the species itself is contributing greatly to the expansion of its area of influence.

The experiences in Pakistan and India show the huge benefits and vitality of using a partnership approach to conserve biodiversity and improve rural livelihoods. ICIMOD is now replicating these efforts with other partners in Bhutan, China and Nepal.

This six-page paper published by ICIMOD in 2001 is one of the briefing series Issues in Mountain Development. There is a major crisis in mountain farming as a result of productivity failures resulting from lock of pollination, particularly of apples. Diversification into high-value cash crops is one of the development approaches being used to help mountain farmers in Hundi-Kush Himalayas, but the gains threatened by the falling productivity. In some areas of China and India farmers understand the problem and are undertaking different approaches to counter it, including using honeybees as pollinators. However the majority of farmers and institutions in the HKH region has little knowledge about the crucial factor of pollination, and are unaware of the need to see bees as a resource for ensuring pollination and not just as producers of honey.