In B&D59 the authors explained the process of honey and wax collection in the Danau Sentarum National Park in Kalimantan, Indonesia. In this article the marketing possibilities are discussed.

In late 1994, the Danau Sentarum National Park (DSNP) Conservation Project began a series of community-based income generating activities. These were ‘entry-points’ to gain local interest in other management and conservation initiatives of the Project.

The rationale was that by facilitating improved community incomes for products made or harvested on a sustainable basis, the Project would establish greater incentive for communities to improve the management of the Park’s resources. Through skills training, assistance in product development, and improved marketing for previously unused or under-utilised natural resources, the DSNP Project helped increase the value of these resources and products to benefit both the natural resources and the communities of DSNP

This work initially began with a plan to bottle locally collected DSNP honey and market it directly to consumers in Pontianak. As honey was generally sold through a variety of traders before reaching the market, honey harvesters received a meagre portion of its end-sale value. By selling direct to Pontianak, the Project hoped to increase significantly the value of the honey for the producers. Based on the same principles, the Project also embarked upon similar activities involving the design, production and marketing of beeswax candles.

Because of the remote location and conservation status of the Park, honey collected there is organic and free of additives. This combined with the honey’s unique natural flavours, traditional harvesting techniques, and its association as a non-timber forest product supporting local community development, make this product highly marketable. In the 18-month period from March 1995 to October 1996, the DSNP Project marketed over 2,000 kg in Pontianak, Jakarta, Riau and Singapore. Demonstrating the broad marketability of this product, an additional 1,000kg was also shipped to the UK in 1997.

Due to the similarity between the tikung collection system practised by the honey hunters in the flooded forests of DSNP and the rafter honey board system in southern Vietnam, the DSNP Project was approached by Vincent Mulder to facilitate an exchange between DSNP honey collectors and the people who collect honey in the seasonally flooded Melaleuca forests of the U Minh Forest in the Minh Hai Province of southern Vietnam.

The first part of the exchange took place in January 1996. The visit identified numerous similarities between the two traditional systems, but also highlighted techniques that could improve bee and colony management, honey harvesting, and wax processing in DSNP Addressing some of these issues would help ensure the long-term sustainability of the bee colonies, increase the quantity and quality of the yields, and thereby advance the goals of conservation by improving the financial viability of the honey and beeswax enterprises.

These and other issues were discussed with honey harvesters from eight villages during Vincent Mulder’s visit. However, because honey collection techniques have been practised in the same way for generations, most individuals remained sceptical about the advantages of Mulder’s advice. To overcome this, it was suggested that honey collectors from DSNP should make a field visit to the U Minh Forest where they could see real examples of the recommended changes in management and harvesting practices for themselves. This would be an excellent way to promote improvement to the tikung system in DSNP.

Three people from DSNP participated in the study tour, including two honey collectors from DSNP and one Project staff member experienced in bees. A representative of the Indonesian Ministry of Forestry also joined. The group was led by the Natural Resources Advisor of the Danau Sentarum Conservation Project.

During the Vietnamese Study Tour, the DSNP delegates attended a two-day seminar and field trip where they exchanged their experiences with their Vietnamese counterparts concerning honey board placement, honeycomb management, harvesting, quality control and production and marketing of honey and beeswax. The delegates also attended the 3rd Asian Apicultural Association Conference in Hanoi.

In general, the DSNP participants gained a greater understanding about the value of bees and bee products and the various types of beekeeping and management systems throughout Asia. They became more aware of the significant interest in, and importance of, their honey harvesting system. In particular, they were exposed to ideas, techniques and concepts that have the potential to produce larger quantities of improved quality honey and beeswax. This has potential to generate additional income for their communities, whilst supporting and reinforcing principles of sustainable development.

The following are some of the techniques that the DSNP Project field staff initiated with the honey harvesters of Danau Sentarum. Following the completion of the Indonesia/UK Tropical Forest Management Programme’s support to the Conservation Project, a Pontianak-based NGO - Yayasan Dian Tama — with financial assistance from the British Embassy in Jakarta and Global Concern (Singapore), continued to develop and implement many of the activities of the Conservation Products Trading Enterprise.

Following the Vietnamese Study Tour, Project staff undertook basic training workshops and discussions with honey harvesters on how to improve their harvesting and processing techniques. Some of these techniques (ie 1 and 3) involved harvesting demonstrations in the field, while other techniques (/e 6 and 7) were best taught through the design and distribution of a simple poster showing a step-by-step approach to each technique. For other techniques (ie 2, 4 and 5) basic prototypes were constructed and shared among honey harvesters to help demonstrate their advantages.

1. CURRENT PRACTICE IN DSNP (TIKUNG): 1. Honeycombs are collected at night when bees are most docile

If daytime harvesting is combined with ‘selective cutting’ (See 3) it allows bees to navigate and retum to the comb to continue producing honey.

2. CURRENT PRACTICE IN DSNP (TIKUNG): Bees are distracted from combs with smoke from smouldering torches with burning embers.

High bee mortality as a result of bees being bured

Hand-held ‘smokers’ can be used to ward off bees with no direct exposure to buring embers.

3. CURRENT PRACTICE IN DSNP (TIKUNG): Honeycombs are harvested only once per season.

Full financial value of wax and honey is lost

Selected cutting of only the honey portion of the comb (leaving the brood intact) would permit 2-3 harvests per season.

4. CURRENT PRACTICE IN DSNP (TIKUNG): During honey harvest the complete comb is removed.

Bees do not re-settle

Only the honey part of the comb is removed

Combs can be harvested several times in the same season

Additional benefits as above

Results in rapid harvesting and increased damage to combs

Some protective gear could be used from simple headnets to gloves

More time and care can be taken during harvest

Reduced damage to comb and bees

6. CURRENT PRACTICE IN DSNP (TIKUNG): Honey is generally extracted from the combs by squeezing entire combs by hand.

Combs should be cut into small pieces, placed on clean cloth and allowed to drain over night

A system of melting the wax in boiling water, cloth strained and processing with a stick-wax-press can yield up to 47% more wax

Quality and quantity of wax increases

Tikung - A wooden board or plank underneath which a colony of the giant honeybee Ap/s dorsata builds its nest. The nest of Apis dorsata consists of one single, large comb, within which are stored honey, pollen and brood. 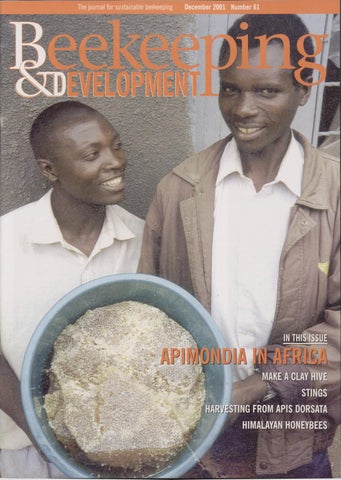