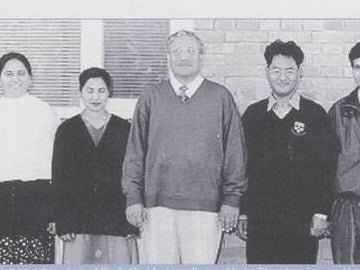 Bees can be extremely defensive. For example, Africanised bees in Central and South America will chase beekeepers for more than one kilometre. In Europe also there are bees that will sting innocent people passing by a hive. In Norway they had such bees and the Norwegians said " Whilst we have these bees we need no military alliances!"

Defensive bees are inconvenient in beekeeping. They are time-consuming because you need to defend yourself against the stings. Every stings a loss because a bee dies after it has stung. It is also a nuisance to need to dress in veiland hat and to cover your body completely so that the bees cannot sting you.

Many beekeepers dream of having peaceful bees that they can examine without any problems. They do exist. In Denmark and Sweden, many beekeepers examine their hives without using protective clothing. The bees do not sting and they continue their activities when the beekeeper takes out the frames and looks at them in the sun.

How can bees become peaceful? It may be accomplished in several ways. The first thing to notice is that some bee colonies are defensive, whilst other colonies are peaceful. This points towards a natural variation that could be used through selection, as explained below.

Another point is that even peaceful bees can sometimes be defensive. This can be caused by the weather. If you examine your hives in a strong wind, during a rainstorm, or when a thunderstorm is near, the bees will often become defensive. Certainly inclement weather can cause a disturbance inside the hive when the roof is taken off.

The behaviour of the beekeeper is also very I important. have learned much from my doctor to whom | taught beekeeping. His actions are always planned and he never makes a sudden movement. In fact, he has never made a mistake. I asked him why and he said that during an operation you must behave in the same way, “If you make a mistake you could seriously damage the patient.” Since I heard his advice I work in the same way and my bees like it.

Bees can learn from experience. If a hive roof is suddenly taken away and the frames are pulled out and replaced without any care, the bees learn that a visit from the beekeeper is a bad event, and they will become very defensive.

You should be polite when you visit the bees. First, you have to “knock on the door”, which you do by sending a little smoke in through the opening of the hive. Wait a minute before opening the hive. Perhaps a little more smoke should be used. The smoke must be cool. You can feel its temperature by blowing it on your own skin: cool smoke is white; hot smoke is blue. After that you examine each frame as necessary. Cover the frames that have been examined - the darkness makes the bees feel they are inside the hive and continue their work.

Bees recall odours and scents very well (remember that flowers use scent to attract bees), and some odours and scents make them defensive. The best thing to do is to use clean clothes. Your body should also be clean. If you are stung on your skin or on your clothes, take the sting away immediately with your fingernail and blow smoke on the spot to disguise the scent. The sting is alive and it releases scents called pheromones that call the other bees to react defensively.

The bees of northern Europe used to be very defensive. They had to protect themselves against bears that would use their claws to open the hollow trees with the bees inside. The bees attacked the bear where they could around its nose and eyes. Consequently, these were also the targets the bees would attack when beekeepers opened the hives. Nowadays the descendants of these bees are not defensive in that way. Primitive queen rearing can take some defensiveness away. When you start new colonies use queen cells from the most peaceful colonies. It helps, but not very much if the bees are allowed to mate freely. It has been demonstrated that you can make bees peaceful in two or three generations. You need an island at least 3 km from the coast (bees cannot fly over such a distance), or you can use an isolated valley. There you place peaceful colonies, or if there are colonies there already, you replace their queens with offspring from peaceful colonies. The colonies on the island or in the valley are also used to supply drones.

We do not know why it is so easy to create peaceful bees in northern Europe, and we do not know if the technique can be used in Africa or America. The bees must not become so peaceful that they cannot defend themselves. Some defensiveness against their enemies is necessary, especially in Africa where honey badgers, birds, wasps and other insects eat bees. It is also good that bad beekeepers are treated as enemies.