Zoom in on Ecuador

Ecuador is one of the smallest countries in South America, with total area of 270,670km ². Despite its small area, it possesses great variety of micro-habitats and high diversity of animals and plants.

The population of Ecuador is approximately eleven million people, increasing annually at rate of 2.19%. The rural population is about 40%. Average demographic density is 43 inhabitants per km? which exerts great pressure on the environment.

Ecuador is an Andean country, located on the Pacific coast of South America, and crossed by the Equator. It is bordered by Colombia to the north, Peru to the south and east. In Ecuador the Andes has two mountain ranges higher than 4000 above sea level, which divide the territory into three natural regions:

The Western or Coastal Region with low humidity and exuberant forests. It is characterised by the presence of important rivers including Guayas and Esmeraldas.

The Central Region or the Sierra is bordered east and west by the Andes.

The Eastern Region or the Oriente presents two types of landscapes, the first goes up to 300 altitude and the second from 300-600m above sea level

Ecuador has democratic government. The country depends on the export of petroleum and some agro-industrial products like banana, cacao, coffee and timber trees are also important export crops.

National beekeeping activity is marginal, compared to agricultural activities. There are only few people with a knowledge of beekeeping traditions, reflected in the low production of honey.

In Chimborazo, Imbabura, Pichincha and Tungurahua Provinces there are organisations which try to teach, and improve beekeeping skills, but these are poorly funded.

Beekeepers not registered with organisations (1989)

1997 honey production estimated at 1000 tonnes. This does not meet the national demand, and Ecuador imports honey from Argentina, Mexico and the USA.

Honey price: Real price is difficult to estimate because honey is presented in many ways: in jars, bottles and cans of unstandardised 1.25 litres. The price is approximately USS$8 per kilogram for consumers, and USS3 per kilogram trade price.

Bee species Before European colonisation of America only Melipona (or stingless bees), and some wasps were used for honey, pollen and wax production. There are still some native bees used for beekeeping, but without significant production. In Ecuador there are at least 100 species of Melipona.

The first Apis arrived in Ecuador with the Spanish colonists, who imported Apis mellifera mellifera and later Apis mellifera ligustica. The European bees had only modest success in the Sierra above 2300 m.

Apis mellifera scutellata (African bees) arrived in Ecuador in 1980. When these bees arrived, the beekeepers began to adapt to the bees’ defensive behaviour and absconding tendencies, whilst utilising their natural adaptability to severe tropical environments and apparent resistance to Varroa. Today Apis mellifera scutellata is distributed across the entire country from sea level to 3500 m, but the habitat to which they are best suited is in open areas with dry seasons.

In the Sierra where most of the hived colonies of Apis are kept, there is little forest and therefore only few forage plants. Plants known to be used by honeybees in this region are: Baccharis floribunda; Bidens humilis; Brassica sp; Citrus sp; Eucalyptus citriodora; Eucalyptus globulus; Eucalyptus viminalis; Eugenia sp; Inga edulis; Medicago sativa; Persea americana; Prunus serotina; and Rubus sp.

The Western Region has different geobotanical forms that are important for exploitation.

The Eastern Region has forests but there is little published information about the development of beekeeping.

A high percentage of hives are Langstroth type but most beekeepers use rustic (fixed-comb) hives. Frames are not of standard size.

The high price for specialised beekeeping equipment is problem for the small-scale producers, and substitute products are of low quality.

Ecuador is country with great diversity of climates so flowering continues throughout the year. This condition would make migratory beekeeping possible, but such activity is rare.

Adulterating honey with glucose discredits serious beekeepers, and although there are laws that prohibit this practice they are not enforced.

Since 1990 timber industries from Europe and Japan have been exploiting the timber plants, principally Eucalyptus which is not native but it has become one of the main resources for the bees. Ecuador is suffering from 40% deforestation. Consequently potential honey productivity is diminishing.

European foulbrood was common problem in the hives of the Sierra. Chalkbrood Ascophaera apis becomes serious problem during dry seasons for African bees.

In 1990 Varroa was reported for the first time. This disease is now distributed over all the country. It appears that Africanized bees can tolerate the serious problems caused by Varroa.

Growing ecomonies with ever greater demand for paper and wood products

Our thanks to Dr Giovanni Onore, Pontificia Universidad Catolica del Ecuador, for providing the information and photographs for this article 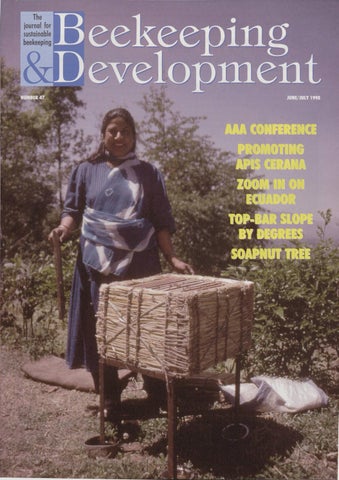