A well-branched, semi-deciduous tree growing up to 18 m high, with rounded or sometimes flat crown, drooping foliage, and an often crooked, cylindrical bole

Leaves: with four to seven pairs of opposite leaflets; oblong, dark green and leathery.

Flowers: white to pale yellow, fragrant, arranged in large branched heads or panicles the tree in flower an appearance of brown speckled with white

Flowering: from January to May with casual flowering in November.

Found between 1000 and 1400 m in dry, evergreen forest and in most woodland types on plateau and escarpment soils and is locally frequent in woodland on Kalahari sands, often dominant in miombo forests. Its rainfall range is from 700 to 1000 mm per year.

Occurring in Angola, Botswana, Malawi, Mozambique, Tanzania, Zaire, Zambia and Zimbabwe. It is the most common and most widespread tree in Zimbabwe.

The hard and heavy wood is used for mining, hut building and heavy constructional work as well as tool handles and firewood. The wood has also been used for making mortars and canoes.

The bark is used for ropes, stitched canoes, corn bins and sacks. The bark contains dark tannin which has also been used as dye. Bee hives are often made from the bark.

In traditional medicine the bark is used as a laxative and to treat constipation.

Propagation is done by natural regeneration and seedlings. Pre-treatment of seeds is recommended by soaking them in cold water for about 24 hours.

Julbernardia globiflora is the best and most important bee tree in Zimbabwe, parts of Zambia, and other African countries. Honeybees visit the flowers for pollen and the abundant nectar supply. Granulation of the honey is very fast with coarse crystals and a mild flavour.

Do your bees have favourite trees? You are welcome to send your contribution for this feature 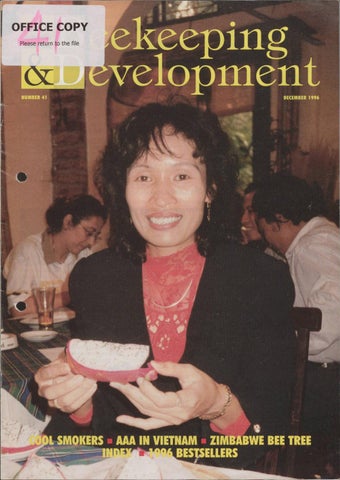