Three of these stingless bee species, the tree dwellers, are living happily in hives of Senhor Nuñes.’ own design at Luso, but the others, which live underground, have so far always succumbed to temperature differences in surface hives This has not daunted Senhor Nuñes, who plans to designs a hive in a shaft which will be pulled to the surface for examination and then returned to a gloomy but temperature constant subterranean existence. The largest of the stingless bees, Trigona bocandei, has produced 10-15 kg of honey in a season and the wax, which is often used to dilute ordinary beeswax, has certain properties which are being studied.

The hives in which the three species of these bees are housed at Luso are very complex and reproduce many of the features of the natural colony As is well known, Trigona does not store honey in comb but in large cups grouped like a bunch of grapes around the brood cells. The hives have drawers which are of the exact internal height to accommodate the cups, and in which Trigona obligingly build them. Attempts to persuade the bees to fill identical rubber cups with honey have been unsuccessful. A feature of the culture of these bees which has not yet been considered is their habit of storing propolis and pollen in separate cups along with the honey. The size of the cups enables the pollen to be eaten unspoiled by wax or honey and very good it is.

Of the three species of stingless bee at Luso the smallest, Trigona landula, the ‘honey fly’ has proved the easiest to manage and a certain amount of information has been collected about it. Virgin queens are raised continuously by this species but are killed unless required. This enables the colonies to be propagated by splitting the brood. Generally Trigona seem more susceptible to temperature differences than honeybees, and make extensive use of propolis and wax to insulate the inside of their hives. Trigona landula mix their propolis with sand for this purpose while Trigona bocandei surrounds the brood and comb with paper-thin membranes of a wax-like substance. The queens are easily identified in all these species. 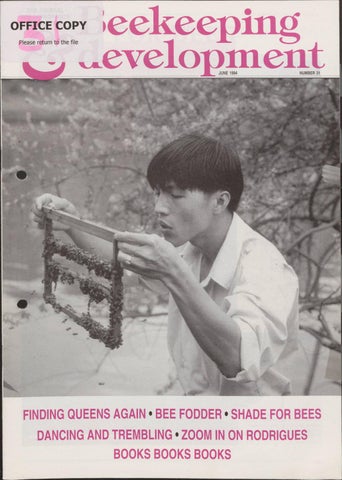