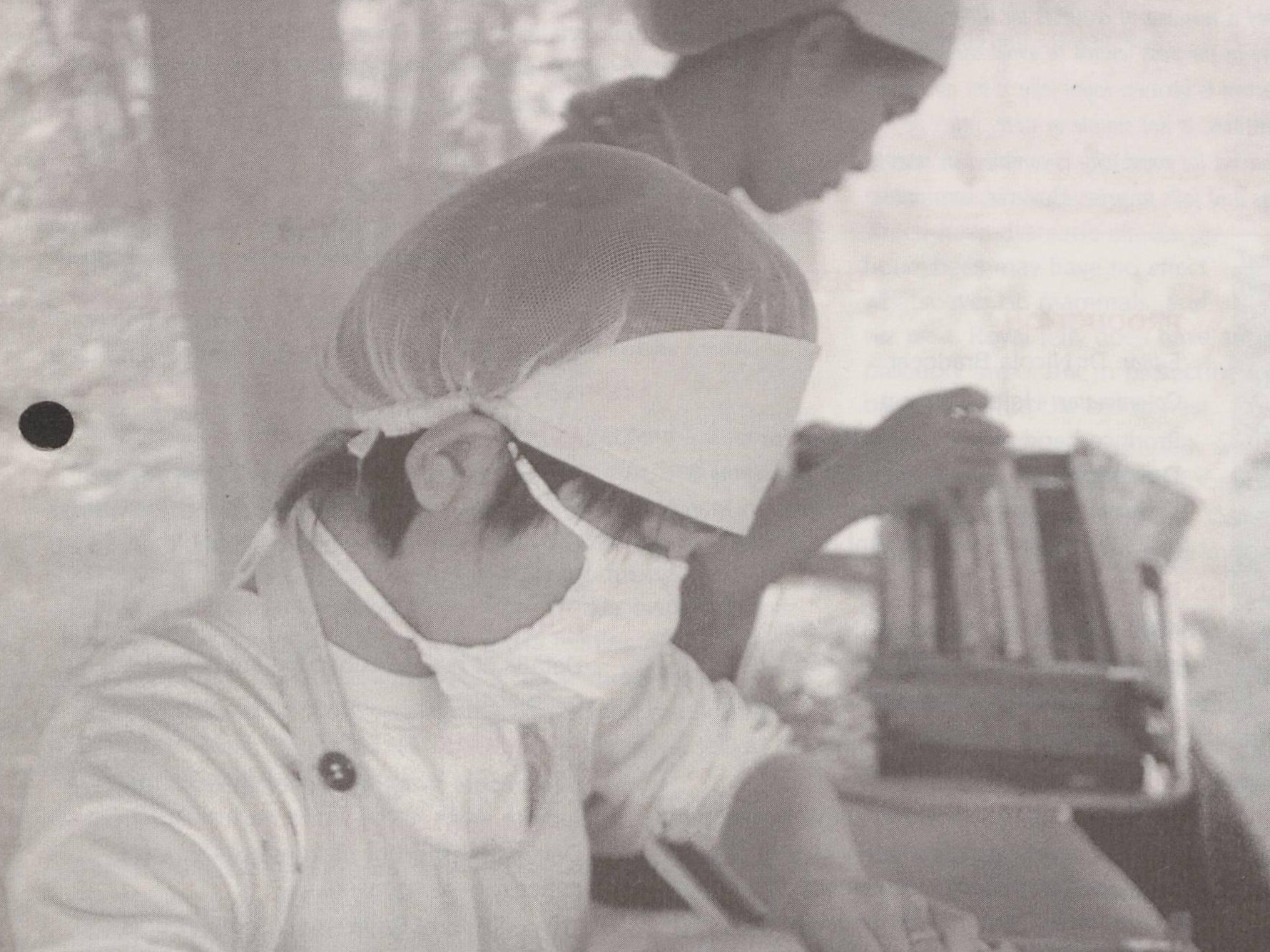 Warwick Kerr is Professor of Genetics at Uberlandia University in Brazil. He is the man who introduced African bees to the Americas. In 1956 he visited Africa, intending to study stingless bees. The Minister of Agriculture had heard tell of the good honey crops yielded by African bees and encouraged Warwick Kerr to bring back 100 African queen honeybees, hopefully to improve honey production in Brazil.

He brought 63 live queens (from Southern Africa and Tanzania) back to Sado Paulo and these were used to head colonies. Swarms of 26 of these colonies escaped in 1957. During the subsequent 36 years descendants of these bees have spread through all of South and Central America, arriving in the USA in 1990. In subsequent years Professor Kerr has worked incessantly in assisting Brazilian beekeepers, and in furthering the cause of ecology.

Question 1. Professor Kerr, Brazilian beekeepers have organised a scientific meeting in your honour and to celebrate your 70th birthday. How do you feel looking back at your career?

My 70th birthday was celebrated by the beekeepers of Rio de Janeiro (a Conference with about 120 people), by my students, colleagues, beekeepers at Rio Claro (an “Encounter” with 400 people) and at Ribeirdo Preto (a Meeting of 250 people), by my students and geneticists at Sao Luis (a Congress with 150 persons), one day Symposium at Jaboticabal (150 persons),  a “Happy Birthday to you” in Vitoria, Argentina (Apiculture Week) and three day seminar by my students of Biology and Agronomy here at Uberlandia.

This set of homages was the most touching event in my life. The sight of my old students, now important professors, directors, business people, one protestant pastor, one catholic priest, one nun, beekeepers, farmers, all mixed up with my present young students this was all very emotional. Brazil needs good and competent professors, and as plan for my life decided to move to many places, the poorer the better, and this was my life trajectory: Piracicaba (1946-1958): Rio Claro (1959-1962); Sdo Paulo (1962-1964), Ribeirao Preto (1965-1981), Manaus (1975- 1979), Sao Luis (1981-1988) and Uberlandia (1988 to present). Besides this have visited 37 tribes of South American Indians, 98 countries, and all the states of Brazil. As Florence, my daughter, put it on the morning of my birthday, “Congratulations Daddy, for such life well lived”.

At the age of eight, in 1930, when the first swarm of Apis mellifera arrived in the village where I lived, 60 km West of Sdo Paulo. My father put the swarm in a box (with no frames in) and for three years we had honey from it. In 1934 became interested in stingless bees.

3. If you were starting on your scientific career today, what research would you undertake?

I have two lines of research: bees (mostly stingless bee species) and horticultural crops (selecting them for high vitamin A contents).

If I were to start my career today I would include more than 500 native Brazilian fruit trees, that is, those good, but unknown, fruit species that we have here in Brazil

4. What advice would you give to a young bee researcher?

In Brazil we have about 300 species of stingless bees (Meliponini) and more than 2000 beekeepers. I am suggesting that every six beekeepers maintain 50 hives with colonies of one Meliponini species, in order that each group of six would save one of the 300 species. I would give the same advice to all beekeepers in order to help save the World’s biodiversity.

5. Brazil now has a successful beekeeping industry based on Africanized honey bees, descended from those you introduced from Africa almost 40 years age. Do you think that beekeepers in Africa could benefit from Brazilian beekeepers’ experience of managing these bees?

I think that Mexican beekeepers are the ones who could profit more from Brazilian beekeepers’ experience with Africanized bees. It is difficult to transfer this approach to Africa.

6. What are the main problems facing Brazilian beekeepers today?

Deforestation is making the harvest of the prized honeys from native plant species, such as timborana, assapeche and cambard more and more rare. The general poverty is leading to increased theft of hives.

In fourth place I would say that in many years some strange diseases cause great losses to our beekeepers.

7. Do you think it would have been better if honey bees of any race had never been introduced to the Americas?

8. Stingless bees can provide significant honey crops in tropical countries. Do you think stingless bees could be managed for honey production on more commercial scale?

Yes. That is actually one of our main lines of research. There are ten species of bees that are very good honey producers, but they depend even more than Apis on the native forest.

10.And finally, what message would you give to the readers of this journal who include beekeepers working in remote areas, and often with little support for their craft?

The main message I would give to the beekeepers of the World would be:

Let us be friends. Let us create climate of solidarity and understanding that Americans and Cubans; Croatians, Serbs and Bosnians; IRA men and Englishmen; South Africans and Angolans would ail finish or understand their differences and could manage hive of bees together. And then, a uniform wave of good techniques and exchange of knowledge and wealth would pervade all beekeepers, with a unique example to the World.

This is a large compendium of information about bee research in Brazil up to June 1992. It has been compiled by Ademilson E E Soares and David De Jong and published in honour of Warwick Kerr's 70th birthday. It is a very useful document: it lists the centres of bee research in Brazil, gives the abstracts of research theses, and provides bibliography of all literature published by Brazilian bee researchers and those foreigners who have done extensive work in Brazil. All of the text within this single volume is provided in both Portuguese and English. This publication was very good idea: the information given will help researchers to contact one another, and to find out quickly what has already been done. The book reveals what great amount of work has been completed in Brazil: it certainly is tribute to Professor Kerr and indeed to the whole of the Brazilian bee research community.

This is the second in the series in which Nicola Bradbear interviews prominent people from the beekeeping world, in the hope that the ideas expressed will stimulate thought and debate.