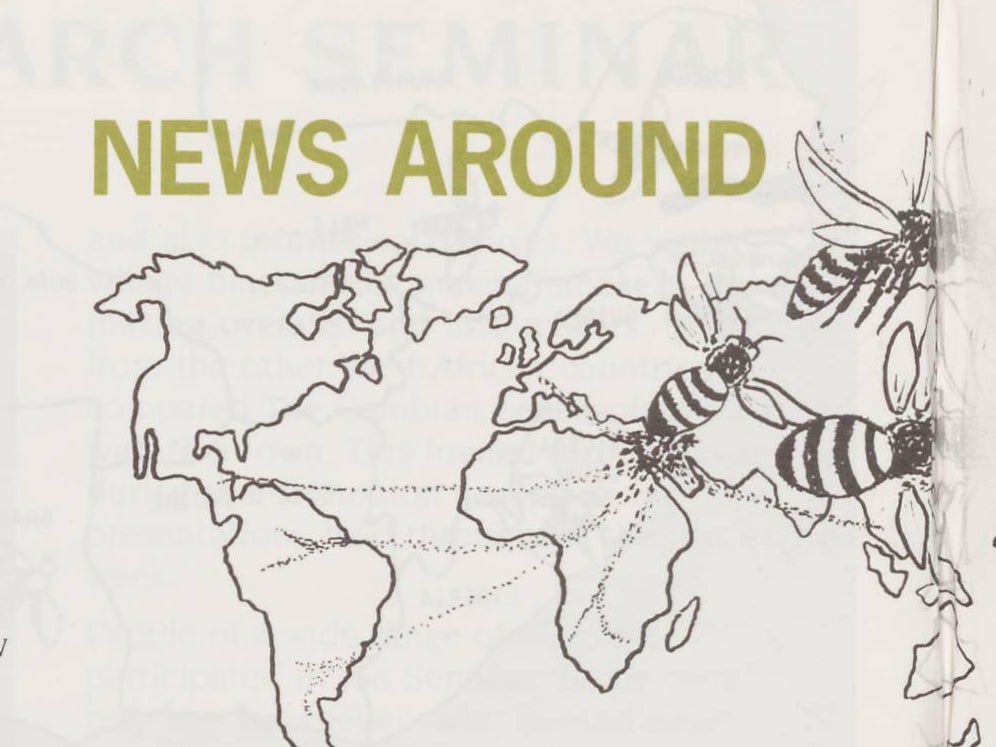 West African beekeeping development stepped forward in November when the first regional Seminar took place in The Gambia. 59 people participated: for most it was their first opportunity to meet colleagues from neighbouring countries.

This Seminar arose out of discussions held at the Nairobi (1984) and Cairo (1988) IBRA Conferences on Apiculture in Tropical Climates. Within The Gambia, the Seminar was organised by AFET, the Association of Farmers, Educators and Traders. AFET is an NGO formed to link and assist Gambian groups and co-operatives, locally known as kaffos. AFET membership is 9300, of whom 70% are rural women.

The six-day Seminar had been planned with thought towards the most useful way of encouraging effective discussion. Field trips on the first two days allowed everyone to meet: we visited projects, some already existing with various degrees of success, others still being planned We saw traditional hives, movable-frame hives, top-bar hives, and also termite-eaten hives. We visited village blacksmiths making smokers, tailors making overalls, and hive-makers. Delegates from the other West African countries compared The Gambian beekeeping situation with their own. This fuelled further debate during the discussion groups and presentations held throughout the rest of the week.

People of a wide range of expertise participated in the Seminar Some were beginner beekeepers who wanted basic technical information, others were experienced in practising and teaching beekeeping. Participants represented government extension and research, those working on aid-funded projects, and individual beekeepers. There was considerable enthusiasm: everyone was anxious to obtain as much information as possible from the Seminar.

Papers discussing existing practices and the potential for beekeeping in West Africa were presented: these will be published in the Proceedings of the Seminar. Traditional beekeeping is widely practised but there exists relatively little documented material on this, or on the behaviour and biology of the native honey bee Apis mellifera adansonii. It is difficult to compare the extent and importance of traditional beekeeping in each of the West African countries. Those in which beekeeping is currently being promoted to the greatest extent include Ghana, Guinea- Bissau, Mali and Senegal.

Everyone agreed that West African beekeepers could benefit from greater co- operation. It was decided to form the Seminar’s conclusions into written statement: The Banjul Bee Declaration, 1991. Three important Resolutions included in this Declaration are:

1. To form a committee to co-ordinate future regional beekeeping activities. After democratic election, six members were duly elected. These are:

3. To hold the second West African Bee Research Seminar in Ghana, in 1993.

Details of the full Proceedings of this first Seminar will be given in Beekeeping and Development when they are published.

This Seminar in The Gambia provides an excellent example of enthusiasm by organisers and foresight by funding organisations in turning good idea into reality.

Perhaps the key to success for any meeting, as was the case for this one, is that few people are keenly interested to see that the meeting takes place. In this case there was co-operation and communication between Dodou Darbo (Chairman of AFET) and Börje Svensson (of Sweden) who together spent much time planning, writing letters and seeking support for several years prior to the event.

An important aspect of any successful event is to encourage the enthusiastic support of others. Many assisting hands are needed in the days leading up to and during a meeting: Delegates to meet, transport to arrive on time, catering to arrange, VIPs to placate, and dozens of other matters In The Gambia, the welcoming efforts of AFET personnel ensured a friendly atmosphere in which the Seminar could succeed. The local beekeeping expertise of Ole Hertz (from Denmark) was enlisted to arrange the technical aspects of the Seminar.

The host organisation could provide the administrative requirements and some, but not all, of the necessary finance. The meeting could only therefore take place with financial support from relevant and interested funding organisations, and by charging a registration fee.

Finance is needed to pay for mail shots and publicity, correspondence, telephone, telex and fax, and many other expenses. Other expertise may have to be paid for, for example the services of translators, and printers. Equipment may need to be hired (microphones, photocopiers, projectors, transport) All of these require arrangement and financial support.

This was provided in various ways by a number of interested organisations: DANIDA funded the host organisation directly, and IFS and CTA supported the participation costs of Delegates Other supporting agencies included ActionAid of The Gambia, Christian Aid, CRS, Future in Our Hands, Oxfam Dakar, and SNF.

The message here is that successful meetings depend upon considerable effort by those who are involved in their organisation.

Congratulations to all involved, organisers, funding agencies and participants, in bringing this first West African Seminar to fruition.