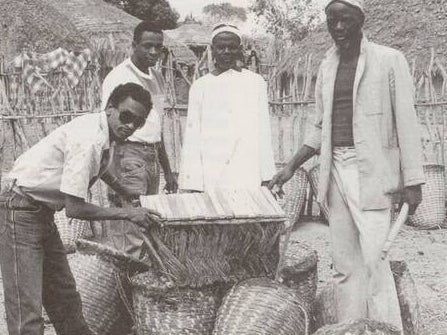 The Kenya top-bar hive is typically around 90 cm long, and has no super Because the top-bars are placed together, touching each other, bees cannot escape from between combs when the roof is removed. This construction helps to control the defensive behaviour of African bees. Nevertheless some bee colonies sting so much that honey must be harvested at night.

When the nest is arranged as described above it is easy to remove the honey. Even at night with little light. combs exclusively containing honey may be removed relatively easily However I found quite different arrangements of bee nests when | inspected colonies in all three zones of Ghana the coastal savannah near Accra, deciduous forest near Kumasi! and dry savannah near Tamale. In several colonies I found the brood nest divided into two with brood combs at each side of the hive. The central combs were filled with a little honey. some pollen, and some empty comb. All the side combs contained brood in their lower part. Half of the upper part was thicker and filled with honey it was impossible to find combs containing honey exclusively. Therefore combs containing honey and much broad were removed. The lower part with brood was cut off and the rest of the comb with honey was crushed and pressed or melted Parts of combs containing brood were fixed to the top-bars. and returned to the colonies. The whole procedure was very unpleasant and uncomfortable.

I therefore started to investigate the problem In the beginning blamed the entrances. Many hives in Ghana, instead of having one entrance in the middle of the long wall, had two, often widely separated from one another It looked as if separate brood agglomerations were located near each entrance. However the two clusters of brood were not exactly by the entrances, but on both sides of the hive. Further investigations revealed bee colonies which had brood nests in the rear of the hive when the entrance was in the front end wall.

Thorough examinations of such colonies were conducted. Detailed records showed that brood in all unusually arranged nests was in new white, or light-coloured combs. Very dark combs never contained brood even when these combs were placed by the entrance. We rearranged the nests. Brood on new combs was placed opposite the entrance, in the middle or front of the hive, depending upon where the entrance was. Over several months the brood nest was not split or moved to the rear of the hive. We concluded that queens would not lay eggs in the old dark combs in which many generations of workers had been reared Dark combs situated by the entrance were the original cause of unusual brood nest arrangements. That conclusion was verified. Dark combs near entrances were removed and replaced by empty bars. After workers constructed new combs, the queens switched to egg laying in these new combs.

In all the rearranged colonies, workers filled the brood-free, side or rear combs with honey. Now it was possible to harvest combs exclusively containing honey.

To make honey harvest easier It is recommended that you rearrange the nest before the honey flow. Old dark combs should be removed from places near the entrance, and put to the side or if the entrance is at one end of the hive, to the other end. Brood on light combs should be by the entrance.