In tropical America stingless bees are diverse and numerous, and are important pollinators. Although stingless bees do produce honey and are exploited by man they are very different from Apis mellifera honeybees.

Certain indigenous species are still domesticated in all Central American countries, and Mexico. The large honey storage pots within the nest are arranged in compact clusters: during harvest these stores are removed and the honey is squeezed out. Since honey pots are mixed with pollen pots there is generally a considerable amount of stored pollen lost during this operation. When honey is collected from natural colonies in the forest it usually leads to the destruction of the nests. But ‘meliponiculture’ is also inefficient and there is little technology. Colonies are housed in old logs and sometimes in cardboard boxes. Due to the inaccessibility of the nest cavity in tree trunks, which only have narrow openings at each end, part of the brood may be destroyed when the honey is taken out. This makes colonies suffer badly from the harvest. Only after a long recovery do the bees again start to produce excess food.

The honeybee Apis mellifera did not occur originally in the Americas but was introduced from Europe. The excellent flora allowed Mexico and other tropical American countries to become major honey exporters. In contrast to this development, traditional beekeeping with the less productive indigenous stingless bees gradually obtained the status of a lowly enterprise.

Recent problems have arisen as a result of the spectacular spread over South and Central America of highly defensive Africanized honeybees. These bees crossed the Panama Canal in 1982 and have now spread over Central America and Mexico. Mixing easily and competitively with domesticated honeybees, beekeeping with these newer bees is difficult. However this has resulted in meliponiculture recently receiving greater attention. In Costa Rica certain regions are well known for their traditional meliponiculture, especially the area around Nicoya.

A colony of these bees can produce several litres of honey. The most important species is Melipona beecheii, ‘jicote gato’, which is commonly domesticated in the peninsula of Nicoya and other parts of Guanacaste, as well as in the north of Puntarenas. It is still common in areas with nearby forest. Little of this meliponiculture is found at altitudes above 700 m. In the area of Perez Zeledon, colonies of a dark variety of the species Melipona fasciata, ‘jicote barcino’ are being kept. Most owners keep their ‘jicotes’ on logs hanging under the roof of the house, under special roofings. The same hives are kept for many decades (sometimes more than 80 years!) by generations of one family living in the same house. All campesino families consider their ‘jicotes’ as very valuable domestic animals.

This type of meliponiculture occurs throughout the country, also at higher altitudes and even in urban areas. The nests of the minute Mariaola (Tetragonisca) are frequently kept in small boxes in calabashes or bamboo pipes. These nests produce much less honey, only up to one litre. In certain parts of the country nearly every house of the village has these small hives! It is not exceptional to find 20 hives hanging on the walls around one house.

Great medicinal properties are assigned to the honey of these small bees and it is sold at a high price. Some producers sell this honey as a medicine to local pharmacies.

The Maya Indians in Yucatan still differentiate between more than ten types of stingless bees, especially regarding the medicinal use of the honey.

This is a joint project between Universidad Nacional, Heredia, Costa Rica and Utrecht University, Netherlands. The objectives of the research are:

The project will provide results that can be applied to beekeeping in Costa Rica and neighbouring countries. It will expand knowledge about the domestication of stingless bees which may contribute considerably to rural development. We are seeking results that will be of importance initially for government and other extension workers. The rationalisation of traditional meliponiculture will offer new possibilities for people in rural areas and might improve the economy of many households.

Meliponiculture is especially important for those who wish to practise small-scale beekeeping and can be developed as an economically important complementary activity. Even the quantatively important honey production with Apis mellifera in Yucatan (Mexico is the second largest honey exporting country) is also based exclusively on small-scale production.

To develop efficient beekeeping with stingless bees it will be necessary to study the following:

2. efficient harvest of honey without damage to brood combs

3. the relative importance of the various foodplants

4. pests and diseases of stingless bees.

Relation to other resources

Stingless bees are of great importance as pollinators of tropical ecosystems. Understanding the distribution of stingless bees in ecologically different zones and their relation with specific food plants may also contribute to conservation of tropical forests.

The project started in February 1990 and has a duration of three years.

This information was provided by Dr M J Sommeijer, Utrecht University and the Netherlands Ministry for Development Co-operation. 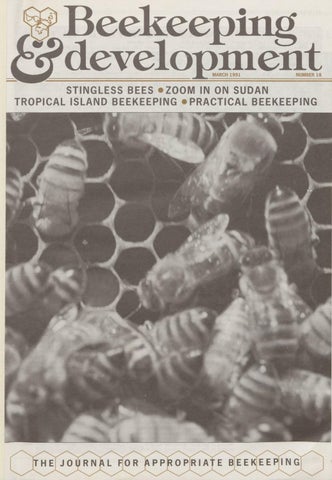