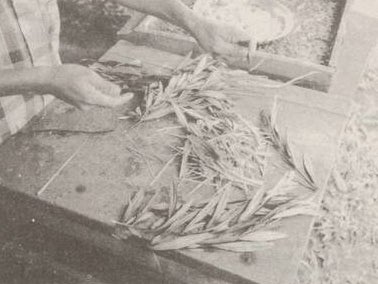 Traditional beekeepers using hives made from local materials produce large quantities the forests of Africa and elsewhere. Until recently the honey from these traditional beekeepers has been considered poor quality on the export market. However honey from Africa is now starting to establish a unique place in the major European markets due to its special characteristics.

A breakthrough came when Bob Malichi of North Western Bee Products, Kabompo, Zambia was invited to the Rainforest Harvest Conference ( see "Fruits of the forest"),

During this Conference much interest was shown by companies looking for pure organic products in the honey and wax samples brought by Mr Malichi. As theses samples were produced from fix-comb traditional hives in a large area of essentially natural vegetation, there was no possibility of contamination from sugar feeding, use of antibiotics or other hive medicines, or spraying of nectar-producing plants with agro-chemicals.

There is an increasing demand for these guaranteed pure and organic products, as the major supermarket chains in Europe now stock an ever-increasing range of organic products. Up until now officially-certified organic honey vas not been widely available. North Western Bee Products Ltd has now been officially inspected and approved by the Soil Association of the UK as a source of organic honey and way This has enabled North Western Bee Products to expand its export of honey and wax and to secure a price well above the conventional market value of their produce.

At the same time the 6000-strong Tabora Beekeepers’ Co-operative Society in Tanzania has successfully resumed exports to Traidcraft in the UK and other ethically-based marketing organisations in Europe (see also Newsletter) 15. These exports by North Western Bee Products and Tabora have only been possible after ears of ground work establishing an organised marketing system, and educating the producers in the selection of the correct type of honey for sale. Other honey containing a higher water content, pollen and so on, is retained locally for beer brewing.

The market for organic honey is larger than the output of North Western Bee Products, and there is the opportunity for other producers and organisations to become registered and begin exporting organic honey. Any interested producers should contact: