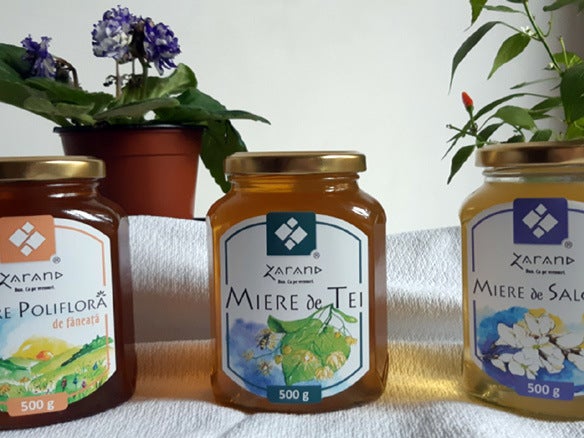 Traidcraft Exchange is an international development NGO that uses the power of trade to bring about lasting solutions to poverty. Working with partners, we implement development programmes in Africa and South Asia, work directly with businesses to improve their supply chains, and campaign in the UK for justice and fairness in international trade. In 2018 we launched a new five-year strategy which deepened our commitment to documenting our programme approaches, their achievements and the lessons learnt. As part of this, in 2019 we conducted a review of our work in the East African honey sector and summarised the key findings in a Programme Briefing available online*.

Here are some of the highlights from the Programme Review:

Traidcraft Exchange is the sister organisation of Traidcraft plc, one of the UK’s leading Fair Trade companies. Traidcraft plc was established in 1979, and in the 1980s began sourcing honey from Fair Trade producer organisations in developing countries. The first range of Traidcraft honeys were sourced from beekeepers in China, Tanzania and Zambia. As the UK’s Fair Trade market matured in the 1990s, Traidcraft’s honey sourcing extended to include Bangladesh, Chile, India, Malawi, the Philippines and South Africa. The practical experience within the wider Traidcraft family of working with and developing honey supply chains, as well as the sector’s challenges and opportunities, informed Traidcraft Exchange’s decision to put honey and beekeeping at the heart of its East Africa Programme in the early 2000s.

Since 2008 the programme has worked directly with over 9,000 beekeepers across Kenya and Tanzania.

The overall aim is the economic empowerment of small-scale beekeepers through developing strong, sustainable honey value chains that are efficient, effective and equitable. The approach is captured in the diagram opposite.

Learning and questions that remain:Institution Building

The Traidcraft Exchange East Africa Honey Programme demonstrates that within two years beekeeper groups can be established and supported to run effectively. However, federated structures (for example associations or co-operatives) take a lot longer to institutionalise. This can be challenging within project durations of three to four years. In part this relates to the need for an in-depth understanding of how to work with entrenched local socio-economic dynamics, and whether, when and how to appropriately but effectively challenge these.

Realistic expectations and the centrality of trust

Collective working through producer institutions is fundamental to the Traidcraft Exchange approach to empowering small producers and can be found across our programmes in cotton, horticulture, jute, tea and more. In the East Africa Honey Programme however, low levels of trust between beekeepers has prevented their institutions from undertaking collective marketing. In some contexts, such as central Kenya where demand for honey is very high, this does not appear to have limited beekeeper incomes. However, in other contexts, our understanding is that collective marketing would enable beekeepers to attract bulk buyers and higher prices. Despite the groups functioning well in other respects, low levels of trust prevent members from taking this next step.

Are some hive types superior to others? Undertaking the programme review highlighted widely used, but culturally loaded and sometimes unhelpful, terminology associated with hive types. There is a school of thought that contrasts so-called ‘modern’ hives (top-bar or frame hives) with so-called ‘traditional’ hives’ (fixed comb – basket, bark or log hives). Putting aside the culturally loaded and normative vocabulary for now, the school of thought asserts the superiority of ‘modern’ hives based upon the suggestion of improved honey yields. Traidcraft Exchange’s experience is that hive type should not be considered in isolation: appropriateness depends on the wider ecosystem of services and support available locally to beekeepers. To utilise new or alternative hive types, beekeepers need to be trained on these types by practitioners who are themselves highly experienced in these specific types. Local service providers need to be available who can construct and help maintain the specific types promoted. Collectively these factors are more critical to hive productivity than hive type per se.

In addition, the assertion of improved yields from the so-called ‘modern’ hives is challenged by several key contemporary practitioners (including key contributors to this Journal!) who assert that when extending the unit of measure from single hives to ‘hive systems’ (within specified geographies) and when looking more closely at productivity over a longer period of time, so-called ‘traditional’ hives are just as productive and sometimes more productive than their ‘modern’ usurpers. While Traidcraft Exchange’s programme monitoring data has not been set-up specifically to shed light on this debate, a related consideration, is hive occupancy rate, a key monitoring indicator of the programme. An unoccupied hive represents unutilised capital, and the ‘cost’ of this to the beekeeper is of course greater when the initial investment is higher, as with the socalled ‘modern’ hives. Therefore, depending on the anticipated occupancy rate, and the economic situation of the participating beekeepers (ie how much available capital they have), there can be a strong argument for promoting so-called ‘traditional’ hives.

Some beekeepers participating in the Programme in central Kenya who keep hives on or near their smallholdings, have provided anecdotal reports of increased crop yields since taking up beekeeping. This seems consistent with literature on pollination services provided by honey bees in agricultural lands. This potential unintended positive impact has not been systematically explored by the programme, but it is likely to be integrated into the next phase as the Programme through a focus on ‘biodiversity value chains’.

Gender and diversity of context

The Programme engaged with women’s empowerment through beekeeping in a diversity of geographic and social contexts. Understanding how the specific contexts support or impede women’s empowerment was crucial to making progress in this area. In Tabora in inland Tanzania for example, beekeeping is mainly practised in forest reserves: these areas provide the most abundant forage for bees. However, these reserves can be far from beekeepers’ homesteads and so a trip to harvest honey can take 4-5 days. For many women it is culturally unacceptable to be away from home: they are expected to perform multiple caring and domestic duties alongside business and farming commitments. In addition, social norms dissuade women from climbing trees to access hives even if they are able travel to forest areas. Therefore, women beekeepers in Tabora tend to employ labourers to hang their hives and to harvest honey. This of course comes with additional costs – reducing profit margins. In addition, and as reported by women themselves, it requires a level of trust that they will not be cheated by dishonest labourers. In coastal Pwani, while beekeeping is a relatively new income generating activity for women, women’s entrepreneurship in general is more prevalent compared to Tabora, and apiaries tend to be located nearer to homesteads, making it easier for women to become beekeepers. However, without the extensive forest reserves, honey production volumes are lower. These examples illustrate the nexus of gender norms and environmental context which need to be considered during programme design and implementation.

Diversification as a point of leverage

While smallholder tea growers in Kenya benefit from some security of market via the highly regulated sector, they report limited capacity to influence their terms of trade with tea factories of which, at least on paper, they are the shareholders. Income diversification via beekeeping reduces producers’ dependence on a single cash crop without affecting this established primary source of income. Increased income and improved cashflow from honey sales has generated a hugely positive response among the participating tea growers, who report reduced indebtedness. In the longer term, diversification via beekeeping offers the potential for small-scale producers gaining greater power to leverage change in the tea supply chain by reducing their dependency. More details can be found at www.traidcraftexchange.org/tea-briefing

Please do read our Programme Briefing at: www.traidcraftexchange.org/honey-briefing

We hope the Briefing will catalyse discussion and debate. Feel free to get in touch via Bees for Development or email or twitter: programmes@ traidcraft.org @TraidcraftDepth