Strong on defence – movers and shakers, shakers and bakers 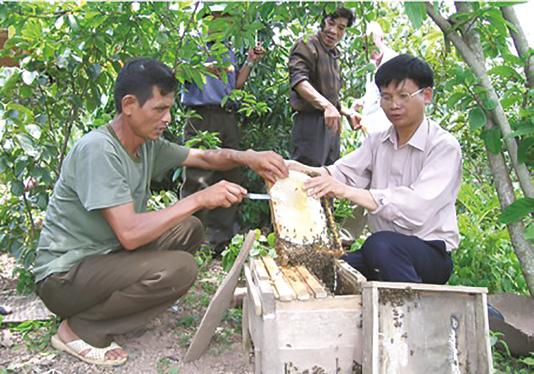 WS Robinson teaches a variety of biology classes at Casper College in Casper, Wyoming, USA. His research interests include the migratory habits of giant honey bees, defences of the Asian honey bee Apis cerana against predatory hornets, and mating behaviour of an Ecuadoran parasitic wasp.

In USA in October 1675, the Wampanoag tribal leader known to European settlers as King Philip was waging war against the encroaching Plymouth Colony in Massachusetts, USA. Roger Williams wrote to the governor of the Massachusetts Bay Colony about one aspect of the famed chief’s military strategy: “Philip’s great design is... to draw... your forces... into such places as are full of long grasses, flags, sedge etc and to surround them with fire, smoke and bullets.” The Asian honey bee Apis cerana (which ranges from India to Japan and is the third-smallest of nine recognised honey bee species) uses a similar defensive tactic, known as ‘heat-balling’ against predatory hornets. Entomologist Masato Ono and his colleagues at Tamagawa University in Tokyo first reported the behaviour in 1987 in the journal Experientia. Guard bees at the entrance of their hive, under attack from giant hornets including Vespa mandarinia, retreat to the recesses of their dark cavity. The voracious hornets, six times the bees’ size, are drawn in behind. Stings are useless against these heavily armoured intruders.

Instead, the guard bees, and other worker bees that they recruit by releasing chemical alarm pheromones, surround the hornets in a seething ball, up to five hundred bees per hornet. They vibrate their wing muscles to generate heat. Temperatures inside the balls can reach 47°C, hot enough to bake the hornets - but not the bees - to death. Carbon dioxide generated in the process also weakens and smothers the enemy. Apis cerana, like its European counterpart Apis mellifera is a cavity nesting species building multiple, verticallyhanging wax combs within a dark cavity such as a hollow tree. The cavity and its single, narrow, guardable entrance is the hive bees’ primary defence against marauders. Many other Asian honey bee species nest in the open, covering a single exposed wax comb with a blanket of bees. Whether it is a cavity with multiple combs or a single exposed comb, a multitude of hungry animals are drawn to the brimming cornucopia of a bee colony: protein and fats from thousands of adult, larval, and pupal bee bodies; stored pollen (rich in protein and fats); and the carbohydrate energy burst and long-term sugar source available from stored nectar and honey. A peculiar twist on defence of the cavity entrance was recently discovered in Vietnam by entomologist Gard Otis of the University of Guelph in Canada, and biologist Heather Mattila of Wellesley College, Massachusetts, along with colleagues Hanh Duc Pham, Lien Thi Phuong Nguyen, and Olivia Knight, in research supported by the National Geographic Society. They observed a new means by which Apis cerana prevents attacks from Vespa soror, another giant hornet: “Worker bees search for, collect, and then plaster animal dung (and other ‘filth’ substances, such as urine, soap scum, and mud) around their colony entrances to thwart attack. Collection of dung and other filth was induced only after visitation by Vespa soror and rates of ‘spotting’ varied across colonies. Wasps were less inclined to land and chew on hive entrances that were covered with filth spots, preventing predator access to the inside of the nest.”

Asian honey bees are quite passive. They do sting, but usually as a last defence after they have been threatened or provoked. As a first response to humans and other vertebrate intruders, they will retreat deeper into their fortress. Continued disturbance rouses the guards, and they emerge from the cavity to sting, producing alarm pheromones that recruit more defenders. The colony discourages not only attacking vertebrates, but most of the bees’ arthropod predators, which mainly include other social hymenopterans - ants and hornets. But several hornet species are problematic. They may attack bees head-on, overwhelm them with their crushing mandibles, and transport the dead bodies back to their paper nests to feed their growing larvae. They mark the entrance to a hive with a pheromone that attracts other hornets. Some, such as Vespa mandarinia in eastern Asia and Vespa tropica in south-east Asia, are big and strong. Vespa tropica is over 2.5 com long and Vespa mandarinia, the biggest hornet in the world, is twice that size. They can easily rout the much smaller bees by direct invasion of the hive. Balling is an insufficient defence against a massive attack by these wasps. At certain times, groups within the colony emerge, either as reproductive swarms or because of food shortage or intense pressure from parasites or predators. Sometimes, an entire colony leaves to surround predators in the open and then flee. Heat-balling is just one of many strategies colonies use when they are on the move as swarms, which was the case with the bees I studied recently in Thailand. Under attack by hornets, a resting swarm, as it hangs from a tree limb, may form a ‘tail’ of 40-100 bees dangling well below the main body of the swarm. It may also form an ‘arm’, a phalanx of bees extending out on the branches. Hornets are drawn to these extensions perhaps because the smaller number of bees is less imposing and seemingly more vulnerable. The small force acts as a decoy, drawing attention away from the heart of the colony, and its queen, and from foraging bees as they fly out and back. Occasionally, the small decoy force manages to lure a hornet in and heat-ball it. Some hornets for example Vespa velutina act as goaltenders. They hover about the entrance to a hive, snatching arriving and departing forager bees in mid-air. In the fight against these hawkers, the entrance becomes a detriment, a focal point of attack. Bees flee their hives and hang in trees as exposed swarms. Vespa velutina is then at a disadvantage. It is faced with foragers coming and going at all angles. The foragers return to the swarm in rapid, unpredictable flight. As they depart the swarm, they explode out of the protective mantle of bees, all of which are on high alert, shaking their abdomens back and forth in unison in response to the hunting hornets.

Abdomen-shaking is another fascinating defence, similar in some ways to the better-known ‘shimmering’ that giant honey bees Apis dorsata exhibit when hornets attack. In giant bees, a sequential lifting and lowering of the abdomen spreads rapidly among the bees on the surface of the open-air colony, creating mesmerizing ripples like a crowd doing the wave in a stadium. Shaking in the Asian honey bee is a side-to-side wiggle; shimmering is up and down. Both apparently serve as similar signals: these potential prey are indicating to a predator that “I see you and I can take care of myself.” An attack will be a waste of time and energy, and could seriously damage both parties. So, the bees shimmer and they shake and they bake. They also move. The most remarkable defence that I witnessed was a short, hopscotching flight that swarms performed to evade hornets. Under attack by either Vespa velutina or Vespa tropica, swarms took to the air and flew distances of between 20 and 90 metres, where they would once again settle on a tree branch and resume normal foraging activities. Though some hornets managed to move along with the bees, most were left behind on the branch just vacated by their quarry. Sometimes duped hornets remained clinging to the branch for a day or more, perhaps drawn by a chemical marker deposited by the bees. After several of these flights, the bees were finally able to settle on a branch, hornet-free at last. There they waited calmly while scout bees found new nesting cavities and returned to the swarm to direct it to a new fortress. Perhaps most intriguing about the elusive swarm flights is that I witnessed more than 40 different swarms performing them in the space of two months, and they occurred in the same small mango orchard where I discovered congregated bivouacs of giant honey bees during migration [“On the Stopovers of Giants,” Natural History, October 2014]. The following year, hornets were completely absent from the area due to heavy monsoons, and I witnessed no defensive swarming by Apis cerana. What is it about that orchard, that spot on the Earth, that draws swarms of one species of honey bee to rest and refuel as it undertakes long migrations, and swarms of another honey bee to select it as the place to stage a defence that allows it to escape its most fearsome predators? I am curious to know. The bees have drawn me in.