Talocher School is a specialist education centre in rural Monmouthshire (southeast Wales, UK) which cares for boys and girls aged 9 to 19 years, who have severe social, behavioural and learning difficulties. Run by the Priory Organisation, Talocher School is surrounded by farmland and natural woodland making it an ideal location for beekeeping.

Tony Davies, a Maths teacher at Talocher School for two years - and an enthusiastic beekeeper for fifteen - takes up the story: ‘Two years ago a swarm of bees moved into the roof space of a home not far from the school. To preserve the colony, the bees were removed carefully and placed in a hive in the field next to the school. I was delighted when the bees attracted the interest of some pupils. We encouraged them to learn beekeeping skills, and some became confident to help with honey extraction and candle making – others developed woodworking skills such as framemaking’.

‘Beekeeping at Talocher really benefits students’, Tony continues. ‘It helps them to develop selfconfidence by meeting new challenges. Handling bees for the first time can be daunting if you lack confidence, even a little frightening, yet with support, students have responded well and are pleased with their achievements. Our first year’s honey crop was 30lb (13.6kg) which was sold locally as a Christmas fund raiser and through Bees for Development’s honey shop in Monmouth. Having the confidence to meet and talk with members of the public through work experience at Bees for Development, and when running a fundraising stall, helps to develop the social skills which many pupils have found difficult to master.’

In the second year Talocher’s bees swarmed and were successfully collected, this time by the pupils. The bees are vigorous and nearly 40lb (18.1kg) of honey was harvested. ‘Our bees seem to have a very good temperament’ says Tony. ‘No stings or problems have been reported in the two years since they have been on site – neither have they needed any chemical treatment as monitoring for Varroa has shown infestation to be low’.

Beekeeping is now set to become a regular part of the Talocher School curriculum, enhancing academic development in maths, science, design and technology, and business. It will play an important part in the development of social skills such as becoming aware of the needs of others, and gaining self-esteem from helping each other. ‘Developing self-belief that they can succeed in a normal working environment is very important to pupils,’ says Tony. ‘Selling bee products with the proceeds going to Felindre Hospital and the Children in Need charities plays an important part in both their personal and academic development’.

Other plans for Tony and his young beekeeping team include a selective breeding program with the aim of raising nucleus colonies and queens. ‘We hope to support local beekeepers with a supply of good-tempered, hardy and productive bees with high natural resistance to disease’ he said.

Bees for Development are delighted to have offered support and advice, and to supply hives, protective clothing and other beekeeping equipment to Talocher School, to offer workexperience, and to sell Talocher School honey through our shop. 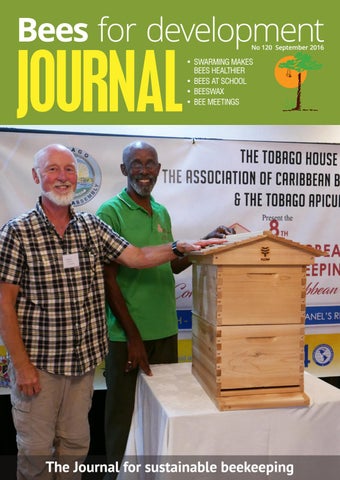