Workshop on parasitic mites and their control 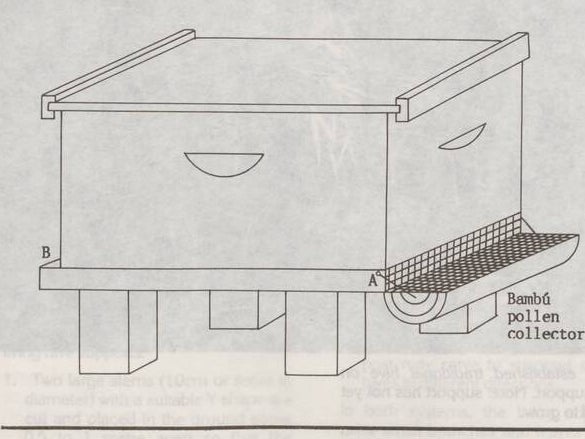 A simple pollen trap with a ba...

Following on after the Apimondia Congress, Food and Agriculture Organization of the United Nations (FAO) and the Polish Academy of Sciences (PAS) organised a Workshop to discuss the mite species parasitic upon honeybees which are currently causing so much concern worldwide. 27 delegates representing 18 developing countries participated in the Workshop along with 13 other experts from Europe, Japan and USA.

Of the three mite species particularly detrimental to honeybee colonies: Acarapis woodi, Tropilaelaps clareae and Varroa Jacobsoni, it is Varroa which is causing most concern worldwide. With Varroa recently reported in the USA (see page 1), the mite is now present in 56 countries. Dr Ritter described the biology of the mite, and delegates from countries where the mite is present

discussed the various methods they use to combat the mite. These methods either involve chemical or colony management methods, or a combination of both, but no single, totally effective method has yet been proved. Chemical methods are widely used, particularly in Asia where all three species of mite are found, and Professor Borneck listed almost 100 chemical preparations currently suggested for Varrea treatment. Of these, bromopropilate, Amitraz, and formic acid are widely used, and the Workshop recommended that these be employed where the use of chemicals is unavoidable. However chemicals must never be used during a honey flow, and will be ineffective if sealed brood is present. Also the widespread use of chemicals in beekeeping is undesirable and may jeopardise the reputation of honey as a natural, health-promoting, and chemical-free product. For these reasons the Workshop strongly recommended that wherever possible non-chemical methods of mite treatment are employed. Useful colony management (or biological) methods include the destruction of infested drone comb, or the continuous removal of infested worker combs to which the queen has been confined. Professor Morse described the apparent lower susceptibility of Africanized bees to Varroa, and the influence of climate upon the reproduction of Varroa: these are two factors which may contribute towards finding a more ideal biological solution to the problem.

The mite Tropilaelaps clareae has still only been reported from 14 countries, but where it is found in A. mellifera colonies with V. jacobsoni also present, Tropilaelaps is considered the more serious of the two pests. Tropilaclaps has received far less research interest than Varroa, but fortunately two of the main proponents of Tropilaelaps research, Professors Akratanakul and Woyke were present at the Workshop and provided recent research findings. Professor Woyke has recently shown that Tropilaelaps populations grow faster than Varroa, and this may explain their more severe effect upon colonies. The Workshop recommended that further research on Tropilaelaps should be undertaken; and appropriate legislation prepared and enforced: an increased distribution of Tropilaelaps around the world can only be detrimental.

Acarapis woodi is a mite which has been spread from Europe to many parts of the world following its initial discovery in England in 1921. It can be controlled well with Folbex VA treatment, and recently in the USA menthol vapour has been found highly successful. In Europe the presence of Acarapis is no longer regarded as seriously as was once the case.

The Workshop provided an excellent opportunity for discussion and exchange of experience as delegates from developing countries gave reports on the current state of beekeeping and the honeybee mite situation in their home countries. Most of sub-saharan Africa is fortunate in not yet suffering from the presence of honeybee mites, and delegates from this area expressed the hope that this happy situation will not change.

It is often recommended that countries of the world should work together to pool knowledge and combat the further spread of honeybee mites: this FAO/PAS Workshop provided a worthwhile opportunity for this to take place.