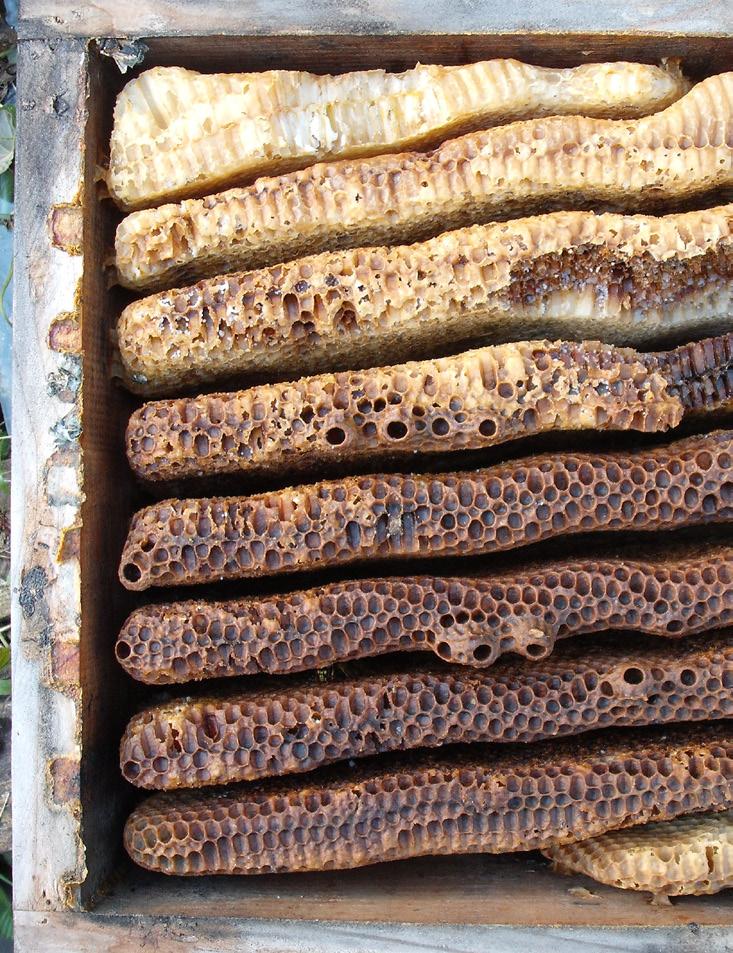 Our last edition told how Heidi Hermann and her colleague Gareth John of the Natural Beekeeping Trust installed one colony of honey bees at Rye Hill Prison in central England. The prisoners were taught how to weave Sun hives, and we re-join the story with six hives waiting to be occupied.

The swarm so keenly awaited by the prisoners duly happened. Thousands of bees poured from the hive to rise heavenwards and join in a wild dance, circling in the heights with joyful abandon, each bee perfectly attuned to all others. Imagine the sheer delight of a swarm within those walls! ‘Please stay, dear bees, do not fly over the fence’ was on the mind of all who stood watching the formation wavering to and fro, coming breathtakingly close to the razorwired wall - hovering – moving back again towards the prison garden. The bees finally settled on the canopy of the newly installed Sun hive. Who chooses to end the dance, who decides where to land?

The bees now had to be coaxed from the canopy of the hive into the hive proper. Steve and two prisoners stepped into the breech, all hopes upon them. Prison security had to relent and put back the two prisoner’s lock-up time. They had been on the bee training course, and now nothing could go forward without them. After four exhausting hours atop a high ladder, and a series of trial and error manipulations to get the great cluster to move inside the hive, the bees were in the Sun hive at sunset. A truly fantastic achievement for Steve and his men. Their exhilaration was boundless. The first swarm is a happening never to be forgotten.

The project’s open day celebration was a great success. ‘Our bee conservation project is truly rewarding’, says Project Manager Paul Evans. “The bees received massive attention, they were out in force. We were watching them closely. We think they feel at home now. So we now have our very own Rye Hill bees in our Rye Hill-made Sun hive, in a garden we created together” Steve wrote, do ‘I sound proud or what?’ We all share Steve’s sense of pride, as well as his sadness upon learning that Rye Hill prison which already houses nearly 700 inmates, is destined to become a mega-prison. A large area earmarked for flowering meadows has been withdrawn to make space for more cell blocks.

The bees responded with unequalled fecundity as if to assert themselves and blazon their message in this strange world where prisons grow faster than flowers. They are knowing, the bees. Thanks to social media we now get instant news about them:

May 17: So excited, no sleep yet. First swarm collected & only one sting. Not bad.

May 26: Bees swarm again at HMP Rye Hill, witnessed incredible scenes and still had the luck to collect and add to 2nd Sun hive with inmates help.

May 27: Quite amazing 3 swarms from 1 hive in 11 days, have some great photos for you. Great work from the prisoners at HMP Rye Hill.

Three Sun hives alive with bees. Many thousands of bees have swarmed into the prisoners’ lives from the mother hive. Three new bee colonies born within those walls. When I returned recently to inspect the new colonies, we were delighted to find that the bees had already caused much wonder and excitement. The Sun hives, mounted high, make for a strong presence in the prison yard. Where previously the eye travelled inexorably to the razor wire on top of the wall, one cannot but look up to the bees now. A gracious change indeed. The swarms, we found, had been well looked after, they had been fed and the bees’ every movement observed with interest. Prisoners were keen to learn to ‘read the combs’, to become familiar with the ways of a growing colony, to get accustomed to standing within a great cloud of bees. We had an inkling that these would be the most avidly observed bees in the whole of England. Subsequent teaching visits have confirmed this. Thanks to Northern Bee Books as well as John Wiley and Sons Limited, the prison library has now been enriched with beekeeping books. The Bee-friendly Beekeeper by Dr David Heaf will no doubt be studied on “Bee Wing.”

Those of us privileged to bring to Rye Hill Prison Sun hive making skills, beekeeping instruction as well as bees and their wondrous ways, we share a deep sense of gratitude - for the kindness we have met, for the hope embodied in the growing gardens, and for all the people who have opened their hearts to the bees in this prison. The bees are doing good work here; they are loved and most keenly observed. Now the prisoners will learn how to take care of them through the seasons of the year. They will grow flowers for the bees. They will be bee guardians. Bees are in their lives now. May it help them and offer much solace and understanding.

Bees always foster change in the lives that they touch. They are good at that; it is what they do best.

As I left the prison, I felt humbled and deeply moved...

When one has formed a relationship with a bee colony and those bees subsequently come under the care of another person, it is normal to worry about their welfare. Will they be well looked after? Will they prosper in their new location? Will they perform in the manner expected of them? All of these questions arose in my mind with respect to the hive of bees that I transferred at the end of March from my apiary to a high security prison some 50 miles away.

The first visit to the prison subsequent to delivering the hive and colony of bees was a fortnight later, to teach beekeeping. At that stage, the hive was much as it was when I last saw it. The main question from the prisoners was ‘Will the bees swarm?’ I considered this colony as one that was likely to swarm, and part of the reason for placing the hive in the prison was to supply swarms for the Sun hives that had been so carefully made by the prisoners. However, of course, I could not be sure. One never can be.

Sometime later, we received news that a swarm had indeed left the hive, and had been placed by the prisoners and staff in a Sun hive. Hooray! The bees had performed as hoped. By the time the swarming season was over, this hive had swarmed five times; each swarm had been taken and hived. Two swarms had left for other quarters, leaving four hives in the care of the prisoners and staff.

It has been a difficult year for bees in my home apiary; the main honey flow failed completely. Would the prison hives be in good shape? We had advised feeding, but those in charge of the bees were all complete beginners. Although other members of the Natural Beekeeping Trust had visited in the interim and had given glowing reports, it was with some trepidation that I returned to the prison in late August.

The first thing I noticed inside the high and forbidding walls was the plethora of flowers. Every path was skirted with flowers in full bloom. The garden project, of which the bees are part, was clearly having a significant impact. Then, rounding a corner, I caught my first glimpse of the Sun hives, made by the prisoners, on tall stands, also made and designed by prisoners. What an impact! The whole ambience was different. Standing tall in the midst of straight wire fences and harsh brick walls were rounded, wooden structures, and from the Sun hive baskets held aloft by these stands flew bees; bees that had swarmed from the hive I took in March; swarms that had been collected and hived by the prisoners and staff. It is always a joy to see prospering a swarm that has issued from one’s own hives, but here were three such swarms, in circumstances that are, to put it mildly, unusual, maybe even unique.

On entering the bee garden area, I immediately went to the Warré People’s hive in its corner. How would it be after throwing five swarms? Had it managed to keep a queen for itself and get that queen mated? The wind was blustery, but bees were flying at the entrance and through the observation window activity could be seen. We decided to take a look inside the hive by rotating the top box to be sure that all was as well as it appeared. And indeed it was! Plenty of sealed brood was evident and, although not overly heavy with stores, the hive was not as light as some of my own after the poor season. Maybe the season here had been better: this hive had thrown five swarms and was in good condition. The quick inspection felt like being reunited with an old and dear friend; one who had been through considerable adventures since we parted. The bees were as quiet as I remembered them, a joy to behold; haven’t they done well!

The prisoners then joined us for an inspection of the Sun hives. We first approached the one known to be the weakest, having been started by the smallest swarm. One of the prisoners and a staff member went through a smooth and obviously much practiced routine of pulling out the pins securing the hive and lowering it from on high to its inspection position. We had agreed to check the condition of the hive in terms of having a laying queen (or not – not all swarms manage this) and to check its level of stores. We also wanted to demonstrate what to look for on future inspections. Carefully the top basket was removed and we began to peel back the cover cloth. As is my practice, I explained to the bees what we were doing and addressed them in affectionate terms. I find this helps enormously in having calm bees, especially, as is also my practice, I was not wearing any protection.

Inside the hive were beautiful arches of comb and I was able to point out the various things that were key to understanding the state of the hive. I congratulated the bees and told them how beautiful they were. The staff member standing opposite to me joked that I should perhaps not look him in the eye when saying ‘you are beautiful’. One of the prisoners, in his protective garb, commented that I had courage to handle bees without protection, placing my hands deep in the hive. I replied that it was not courage but trust, me of the bees and the bees of me.

All three Sun hives were in excellent condition bearing in mind the season we have had. The feeding regime that we had recommended had clearly been assiduously followed. We had a full debrief in a meeting room and answered many perceptive questions about the bees, their behaviour and welfare. It was clear that there had been occasions when the bees had not been as quiet as they were today and the reasons for this were discussed. It was evident that the prisoners had developed an excellent understanding of bees and their ways, and had learned that a calm and caring demeanour is a pre-requisite to having calm bees.

Few beginners would cope as well with so many swarms in their first season. Few beginners would be as acutely observant of their bees and their ways. Here were men who had committed serious abuse of one sort or another and yet they still have within them the ability to observe and care deeply for another creature. As I left, I felt humbled, impressed and deeply moved. I felt that the bees in that place know they are in a special relationship, beyond the norm. The prisoners know it too.