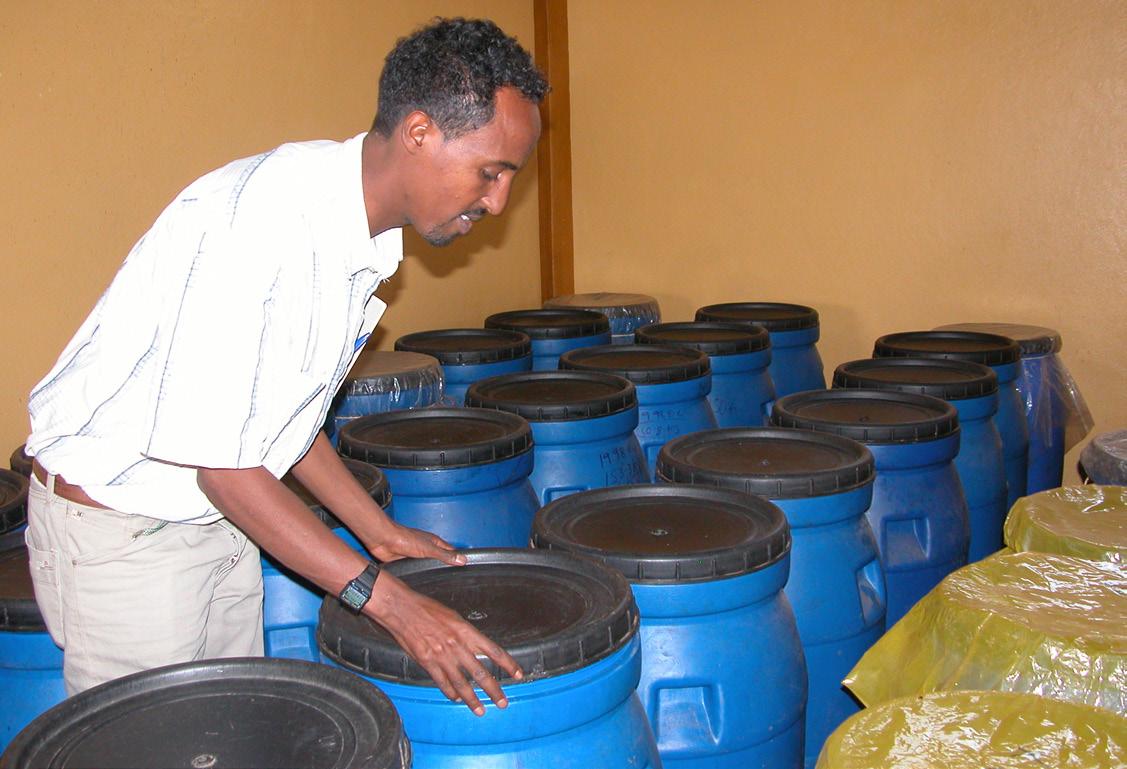 The integration of beekeeping into cashew orchards has great potential to increase cashew nut yields and to also improve farmers’ income through the sale of bee products. Facts and figures for the benefits of this integration are not available in cashew producing countries. To measure the contribution of bee pollination for increasing yield and quality of cashew nuts, The African Cashew Initiative commissioned this study between October 2012 and June 2013. We introduced honey bee colonies into cashew farms in Benin and Ghana to find the effect on cashew production.

The study took place in the cashew growing belts of Benin and Ghana. In Ghana, two experimental farms were set up in each of four cashew growing communities: Badu, Kranka, Tanobuase and Wenchi.

In Benin, farms were selected in Bassila, Ouesse, Parakou and Tchaourou – a total of eight farms. Within each community, two farms with trees of a similar age, good cultural practice, and spaced not less than 2 km apart were used. The study began in October 2012, when cashew trees in both countries had just started flowering.

Two honey bee colonies (Apis mellifera adansonii) in top-bar hives were set close to a marked experimental plot on the first farm. Seventy cashew trees (seven rows, ten in each row) were marked with red paint to form the experimental plot of the orchard. The hives were inspected internally and bathroom scales were used to record their initial weight. The second farm (control) was selected at a distance not less than 2 km away from the first and without managed honey bee colonies. Seventy trees were similarly marked with red paint.

Four beekeeper-cashew farmers, in most cases owners of the experimental farms, were informed about the study after they agreed to fully support the research. Notebooks marked up with the relevant tables for data collection were explained to the farmers and they used them for record keeping. The farmers were taught to carry out the following: Accurate scale reading; Weighing hives weekly and recording their weight accurately; Weekly collection, weighing and recording of cashew nut yields from the 70 trees; Weekly sampling, weighing and recording the weight of 200 nuts from the total obtained from the 70 trees.

Eighty cashew farmers in Ghana and 40 in Benin were interviewed individually and taken through a structured questionnaire. Their responses were recorded and analysed using the statistical software SPSS 16.0 for Windows.

Ghana – the majority of farmers (88%) did not grow any crops under the closed canopy of their orchards and 38% could not think of any crops that could be grown under cashew trees for additional income. The remaining 12% cultivate one or more of avocado, cocoa, cocoyam, ginger, plantain and yam under the trees. Most farmers did not keep animals on their farms although a small number (26.3%) kept bees, hens, sheep or snails.

Benin – none of the farms had any crops growing as undergrowth, and none of the farmers could think of a crop that could be cultivated for extra income. It was observed that the spice Aframomum melegueta (also known as Guinea pepper) was growing wild in the forest vegetation adjourning cashew orchards. Its integration into the orchards could be explored. Only three farmers kept cattle and hens, however over 55% of cashew farmers interviewed kept bees on their farms.

Agrochemical usage: Almost all the farmers (90% in Ghana; 80% in Benin) did not use chemical pesticides or fertilisers on their farms. Oecophylla red ants were widespread in both countries and used as biological agents for pest control on cashew orchards – see Table 1*.

* Table 1. The original article has a table showing the summary of questionnaire responses from 80 farmers in Ghana and 40 in Benin which is not available on this mobile friendly version .

Integration of beekeeping into cashew orchards

*Table 2. The original article has a table about honey, beeswax and propolis production for cashew orchards in Ghana and Benin which is not available on this mobile friendly version.

Table 3 shows the results of effective pollination activities of honey bee colonies in the experimental orchards. On average, the yield of raw cashew nuts (RCN) was 9.1 kg/tree and 4.2 kg/tree for orchards with and without bee colonies respectively in Ghana; and 6.75 kg/tree and 2.16 kg/tree in Benin. The indication is that the presence of honey bees in orchards improves RCN yields to up to 116.7% in Ghana and 212.5% in Benin (Table 3; Figures 1 and 2)*.

The presence of honey bee colonies in orchards did not affect RCN quality significantly as measured by the weight of 200 nuts sampled in the same growing area (Figures 3 and 4)*.

The study has established that the incorporation of beekeeping into cashew farming systems will improve the productivity of farms and income levels of farmers in two ways: the sale of bee products (beeswax, honey and propolis) and also increased nut yields as a result of effective pollination activities of honey bees. The baseline rate of incorporation has been established as two colonies per hectare of orchard. This means that a cashew farmer with a five hectare orchard could operate an apiary of ten honey bee colonies. However this number could be increased gradually depending on the availability and richness of additional forage resources within the cashew ecosystem and the presence of nearby apiaries. It was observed during the study that worker honey bees sometimes collect cashew apple juice. It must be noted that honey bees do not depend entirely on the cashew trees for forage. Other flowering plants in the nearby vegetation provide additional forage especially during the offflowering period of the cashew trees (June to October): these extra sources sustain bee colonies in the cashew ecosystem. Honey bees are not the only bee pollinators of cashew flowers, however large numbers of honey bee workers on the farm (over 70,000 from the two colonies for one hectare) ensured that every receptive hermaphrodite flower was visited and fertilised to produce fruits. A single cashew tree at one time produces about 767 flower panicles of which 63–67 are hermaphrodite (male and female structures in one) and 250–400 are male flowers. All the hermaphrodite flowers must be visited by pollinators to effect fertilisation for fruit set (Bigger, 1960). Several other bee species including stingless bees and small solitary bees also contribute to the effective pollination of cashew flowers.

Studies conducted in several cashew producing countries such as Brazil and India have attributed low nut yields of orchards to inadequate pollination. The notable significant higher RCN yields recorded in farms with honey bee colonies are in line with other studies conducted in India. Reddi (1987) found that 25–72% of cashew flowers were not pollinated in nature because of pollinator limitation and stated that an increase of 157.8% was possible if flowers received adequate pollen. The significant higher yields recorded on farms in Ghana over Benin are attributed to low species numbers of other bees recorded in orchards in the cashew belt of Benin. Many stingless bees that were found in orchards in Ghana were absent in Benin. An enterprising farmer could additionally cultivate shade loving crops (for example Aframomum melegueta and ginger) under the cashew trees to improve farm income. Domestic animals including goats, poultry and sheep on the farm will also add to family wealth and health.

Beekeepers in both countries need more knowledge concerning the management of apiaries, especially in the cashew production system. Current methods of harvesting and processing of quality bee products must be also upgraded.

*Table 4. The original article has a table showing income value of integrating two honey bee colonies into one hectare cashew farms in Ghana and BeninItem which is not available on this mobile friendly version.

Thanks to GiZ/African Cashew Initiative (ACi) for providing the funds for the research work. The immense support during the field work provided by Messrs Kodjo Siaka of Centre de Recherches Agricoles (Benin), also H Odoi and E Laryae of ACi (Ghana) is much appreciated.