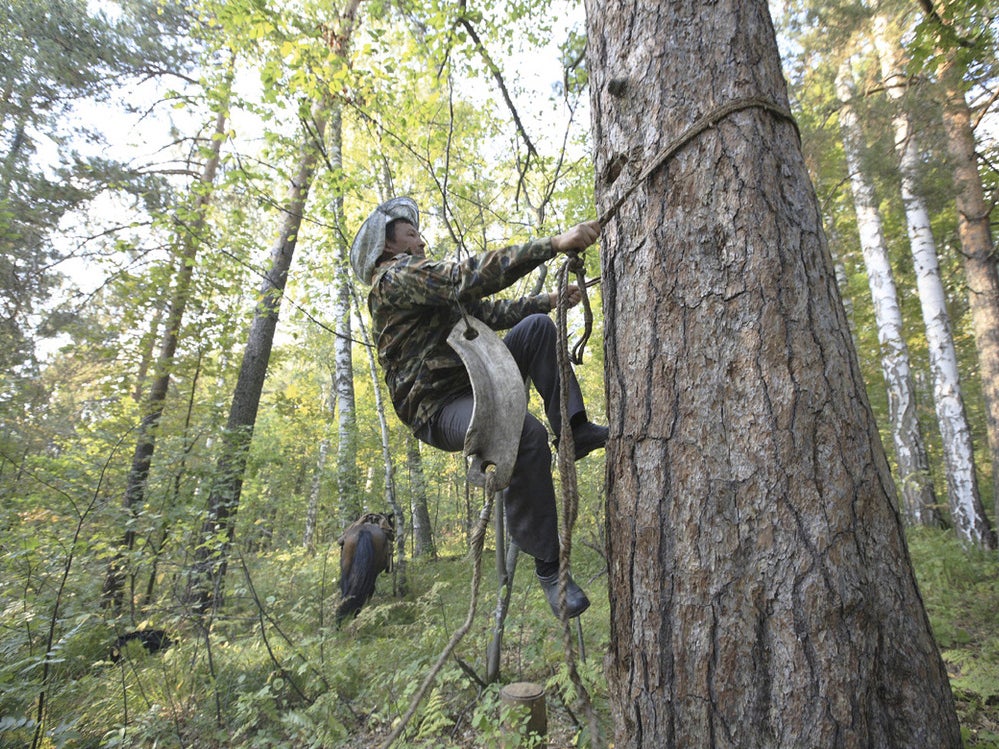 They are found in wild honey bee nests and in the apiaries and stores of beekeepers. Wax moths perform a valuable role as they completely destroy combs when a colony dies out. The resultant debris that they create is unlikely to harbour bee disease – this reduces the spread of infectious bee diseases. This is why wax moths are sometimes called The Beekeepers’ friend.

Wax moths may be found living inside hives, however strong honey bee colonies will not tolerate them. The moths can be a nuisance if the colony is weak or there are many uncovered combs where the moths can lay eggs undisturbed. They are most often found in combs outside the hive, in stored honeycomb in supers, or in sacks of comb and cappings waiting to be rendered into beeswax blocks.

The adult female moth lays her eggs in drawn honeycomb (rarely in foundation). On hatching, the larvae, which are very active caterpillars, tunnel through the combs leaving silken webs over the surface. After a period of pupation, adult moths emerge, mate and continue the cycle. Adults may be seen when the hive is opened, and wherever there are adult moths, there are likely to be wax larvae in sealed bee brood or in unused brood combs. The larvae burrow through the combs to feed leaving distinctive channels that show as diagonal marks across the comb. Eggs are not visible.

Wax moths do not kill bees or bee colonies. They are a particular nuisance for frame hive beekeepers who store empty honeycombs and brood combs outside the hive for use in future beekeeping. These combs, unprotected by bees, are very vulnerable to wax moth infestation.

Wax moths are attracted to comb that has been used for brood where their larvae consume the bees’ larval skins and pupal cases left in brood comb. Pupae of Greater wax moth can damage wooden boxes as the mature larvae spin tough white cocoons, and gouge depressions in woodwork to attach them.

The best way to prevent wax moth damage in beekeeping is through good management. Beekeepers should:

• Keep honey bee colonies strong at all times, as these will cope with wax moth and discourage them from breeding.

• Not store drawn comb but harvest whole honeycombs, like those beekeepers who harvest from fixed-comb, or top-bar hives.

• Not store old combs and cappings, but render them into wax blocks (rendered blocks are unattractive to the moths).

Beekeepers who store frames of drawn comb for any length of time often use treatment to keep the comb in good condition for re-use. There are three main methods (see table right)

*The information given here is brief. If these methods are selected for use, more detailed instructions must be sought to ensure proper and safe procedures are followed.

Never use paradichlorobenzene (PDB) crystals. This was used in the past and is recommended in old beekeeping books. It was effective but the chemical can accumulate in the wax, harm bee larvae and contaminate honey. No household moth killer or moth balls should ever be used as they are all based on chemicals that are highly toxic to bees, and may be carcinogenic to humans.

Advantages: Not toxic or dangerous to handle. Useful for small numbers of frames. No reported bad effects on bees.

Disadvantages: Not effective on eggs. Time consuming. Expensive and must be sourced from a specialist supplier.

Treatment Method: The chemical is placed above boxes of drawn comb, then sealed. Fumes sink and penetrate combs.

Advantages: Effective at killing all stages of moths.

Disadvantages: Fumes of both chemicals highly toxic for people (acetic acid must be very strong to work).

Treatment Method: Place combs in a freezer or rely on winter frosts in cold countries.

Wax moths are a normal part of beekeeping and all beekeepers should expect to see them from time to time. They do not kill bees. They are a particular problem for frame hive beekeepers working with drawn comb yet are rarely a problem for beekeepers who harvest whole combs. Wax moth infestations rarely take hold in strong colonies where comb is regularly being re-built.

Before the introduction of frame hives to Amhara State, wax moth was not seen as a problem. This is not because of the hives themselves but how they are managed. Beekeepers often do not remove honey supers from the colony during dearth periods, when the number of bees in the colony is reduced and the bees cannot cover all the combs. While these combs are exposed, and the bees are generally less active, moths can take hold and multiply.

Both top-bar hives and local style hives are used in Amhara. In these systems wax moth do not persist in the colonies because during harvest time whole combs are removed, leaving nowhere for the moths to live without coming into close contact to the colony which will deter them.

All abandoned hives with combs are infested by wax moth. But we do not know if the infestation caused the bees to leave, or it developed after the bees absconded for a different reason. Strong colonies have no problem with wax moth. If a small colony has a wax moth infestation before peak flowering time, usually the colony expands as normal and overcomes the infestation.