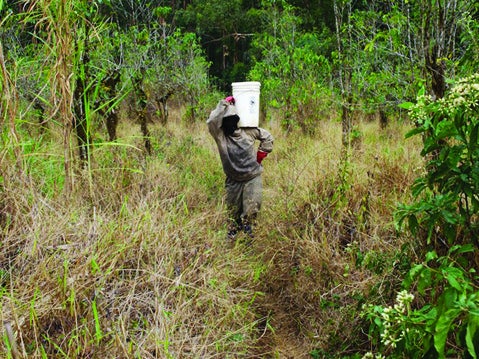 Women in beekeeping- success a...

Recently I heard a new beekeeper telling prospective customers that he beats his runny honey in a food blender to cream it, that is – he beats air into it to give it that opaque look. Some of the air had floated out and all the jars had large frothy heads. I could have simply dismissed this but I have to confess to having the same confusion forty years ago!

The object of this article is to clarify the terminology and process of producing fine soft set honey.

Soft Set is a version of set honey that has its crystal nature broken up by mashing to give a spreadable texture similar to butter or margarine spreads and sometimes referred to as ‘creamed.’

Most customers prefer a fine, smooth crystal size of soft set honey, but this cannot be guaranteed with natural setting. In particular, honey that has been liquefied and then undergoes a secondary set will almost invariably set with large, irregular, coarse grains.

This is an optional process which forces a ‘willing’ honey to granulate with a fine smooth crystal size.

If you want return customers for your product then it must sell itself by its taste, appearance and texture. Naturally set honey is unattractive to most customers for a number of reasons:

• It is usually ‘spoon bendingly’ hard and has to be chipped out of the jar.

• On setting, (granulating) in the jar it usually shrinks in volume and retreats from the glass wall, leaving mirrored or frosted areas which do not encourage confidence in its wholesomeness.

• The granular texture is usually uncontrolled and can be coarse and irregular rather than the preferred fine and smooth.

• Honeys that are only partly set also do not sell well.

Do you want to sell your set honey or are you content to let it sit on the shelf once it has passed to the retailer, with few or no re-orders? Start by answering ‘Yes’ to the first bit and ‘No’ to the last bit and we are making progress and the soft set process is your salvation.

Soft set honey is smooth and fine and can be spread thickly and easily with a knife. It will be consumed quicker and a re-order should be guaranteed.

Granulation as a natural process

Honey is produced from nectar by, amongst other things, reducing the water content to less than 20%. This is done in the bees’ nest at about 35°C. The bees remove the excess water to help preserve it against yeast fermentation during winter storage.

Yeast can only proliferate and spoil the product if there is enough moisture in the product. There should be no surplus of water in a ripened honey, just enough to keep the sugars in solution. In honey, the solution of sugars in water is said to be near saturated: no spare water, hence no yeast spoilage. Clever little bees!

As the honey is cooled away from the hive - in the comb, in a bucket or jar - it becomes ‘super saturated’. That is, at lower temperatures there is not enough water to keep the sugars still in solution and it is physically unstable.

It stabilises itself by crystallising out (‘granulating’ or ‘setting’) some or all of the sugars. The principal sugars in honey are fructose and glucose, and glucose is less soluble than fructose. Therefore honeys high in glucose will rapidly crystallise to a granular nature.

This formation of crystals is like the construction of rigid scaffolding: the crystals link to give a rigid crystalline structure, which is how the natural set honey can become so hard.

With soft set honey the crystals still remain but the rigid crystal to crystal linking is broken physically by stirring. To be able to stir the set honey you need to warm it enough to soften the linking. Soft set honey should remain soft and be spreadable like soft margarine.

The soft set process – is it difficult?

No, try out the following experiment with a 500 g jar of naturally set honey:

• Leave the metal lid on and place the jar in your microwave.

• Full heat for about 20 seconds to soften the contents (not long enough to dissolve it to liquid honey).

• Stir the contents with a spoon to break up the crystalline structure.

• You have produced a soft set honey.

• It may be coarsely crystalline or may be fine but it will remain as a soft set honey.

NB: Leaving the metal lid on forces the microwaves down to the middle of the jar rather than just heating the top of it. And dismiss the myth instantly; you will not get arcing flashes on the metal lid! Just remember that the inside of the microwave is made of the same sheet metal as your jar lid.

This is an optional process to ensure that your soft set honey has a fine smooth texture. It is only necessary to correct a naturally set coarse textured honey.

One and a half kilograms of fine grained set honey will ‘seed’ a 15 kg bucket of liquified honey: a 10% ratio.

One of the mistakes that beginners make is committing their honey to jars directly after extraction and usually without any idea as to whether it will set in the jar or not, and whether any setting is even or irregular, fine or coarse.

How can you know if your honey will granulate? Put it in 15 kg buckets after extraction, wait and see which buckets have granulated three months later. If it has not granulated, or only partly granulated, put it aside to be processed as clear honey.

• Reliquify the 15 kg bucketful in a warming cabinet at 60°C. Ours is heated by two 100 W lamps and takes about ten hours a bucket.

• An electric oven is good as a warming cabinet but check the temperature regulator setting with a thermometer beforehand as ovens are not accurate at low temperatures. Our domestic oven dial reads 70°C when it is heated to 60°C. It takes about five hours in the oven to completely liquefy a bucketful of honey. Check regularly - you do not want to heat the honey longer than necessary.

• Warm three 500 g jars of fine set honey as the seed (naturally hard set or soft set, it does not matter) in a microwave for about 15 seconds per jar. Leave the metal lids on and just enough time to soften it but not liquefy it.

• With a spatula empty the jars into the bucket and stir to mix thoroughly. We use a sturdy commercial potato masher.

• Allow the honey to reset, taking about three weeks usually to give you hard, set fine grained honey.

• Continue with the soft set process.

• Warm the bucket of fine set honey in the warming cabinet for about eight hours at 40°C until it is soft but not runny, test by squeezing the bucket sides.

• Cut with a palette knife to ease mashing.

• Macerate with the potato masher to break up the lumps.