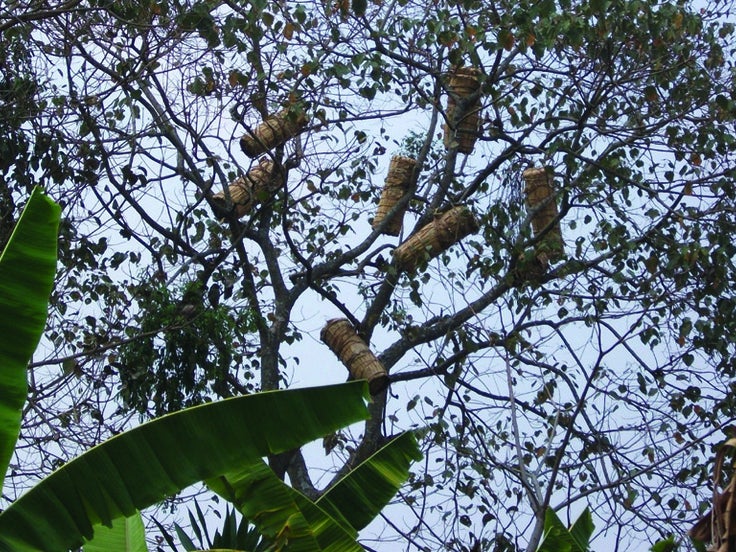 Acting at the right time

The aim of all livings things is to reproduce and secure the continued existence of their species. Honey bee colonies multiply naturally by swarming. In the past this was used as a natural way of colony multiplication and the heathland beekeepers used to sit in front of their basket hives watching their swarming colony ready to catch the swarm in a bag fixed to the hive. Nowadays swarming is considered to be a loss of bees and honey. For good beekeeping practice it is necessary to know, understand and respect the context of swarming.

Many small factors can influence the swarming impulse. These range from stimulating the construction impulse, cautiously extracting bees and combs, as well as drone brood rearing, through to timely honey extraction and a balanced space provision according to colony strength. Young queens have less tendency to swarm, but there is no guarantee that they will not do so. Also breeding offers chances. But this should never be exaggerated, because the swarming instinct is closely related to vitality and power of survival.

Radically cutting a queen’s wings only delays swarming by a few hours, and the queen usually pays with her life lost in swarming. An empty hive as a swarm catcher is only effective if it “smells like bees”. And used open hives are not acceptable because these bear the risk of spreading foulbrood.

It is not bee-appropriate to suppress colony development early by extracting too many combs with bees or by expanding the brood space too much. Waiting and only cutting out queen cells is also not helpful to the colony and creates delay in its actual development.

The first visible signs of preparation for swarming are manifold. To begin with, brood rearing is usually reduced. Consequently, there are less bees gathering pollen and the bee bread (pollen) in the cells is covered with a glossy nectar coating for conservation. All construction activity is stopped, fresh drone brood is lacking, and honey is stored instead. At the entrance ‘lazy’ bees are crawling around, and food exchange does not take place there. Queen cell constructions appear on the combs, and their interior is polished by the bees. Once the cells contain eggs or if they are actually sealed, you can only care about the primary swarm – when the queen leaves the hive with a large number of workers. If you already hear some ‘tooting and croaking’ in the hive, it is too late and you can only try to avoid the after-swarm. Secondary swarms are led by several virgin female bees and as a result, these swarms are half the size of the primary swarm - and do not occur as often.

Immediately before swarming, usually around noon, the bees retire to their hive. A few minutes later, the swarm emerges. Now you can only hope that they settle initially nearby at a place not too high up: small fruit trees are an ideal initial location. The longer a swarm is on its way and the younger the queen, the higher it flies and settles down. When you catch a swarm from a place high up, you should first care for your health: this is more important than to lose a bee colony! The actual catching and lodging of the swarm is usually straightforward. You can handle swarms easily and without special protective clothing because bees only defend with their own life if they have built combs.

Nowadays, it is difficult for most beekeepers to integrate multiplication by swarming into their management scheme, because of time constraints. In order to avoid swarming, the colony can be either divided into the parent colony with all the brood and a nucleus colony with all the flight bees, or create an interim nucleus. Depending on the management scheme, a controlled juvenescence and multiplication of the bee population can be achieved by different methods of creating nuclei.

Following Good Beekeeping Practice, nuclei should not be created at the wrong time, because swarming and forming nuclei can be compared to a birth: if it is induced too early, mother and child will suffer. This means that the parent colony should not lose too many bees and brood, and the nucleus should not be too weak. Nuclei created from a colony in swarming mood generally develop much better and faster. If it is formed with sealed brood, the parent colony, at the same time, gets rid of numerous Varroa mites.

Once a colony is committed to swarming, one emergency action is to pre-empt swarming by dividing the colony into parent colony and nucleus:

• Leave the queen with food and combs in the original location

• Foraging bees will return to their original queen

If swarming is to be avoided without increasing the number of colonies, you can create an interim nucleus:

• Form a nucleus or a split as described above

• Reunite with parent colony nine days later at the earliest.

Swarming cannot always be avoided. Water sprayer, swarm container and queen cage should be at hand. Work quickly and prudently:

• When the queen is inside you have the swarm!

• In the evening or after dark transfer the swarm into a hive containing division boards or comb foundation. The colony can be placed at the original location, because swarming makes bees forget about their home hive.

As soon as there are several queen cell cups with polished interiors it is time to extract bees and combs in order to create nuclei:

• Place the nucleus at a distance of two to three km

• This will develop into a young colony after four to five weeks.

• Spray swarms and nuclei free of brood with 15% lactic acid

• If necessary, repeat treatment in later summer and winter.

Measures to avoid swarming are taken in good time     YES/NO

Created nuclei are not too weak     YES/NO

Multiplication of colonies is done with young colonies     YES/NO

Swarms and nuclei are treated against Varroa

BfD acknowledges www.diebiene.de as the original source of this article