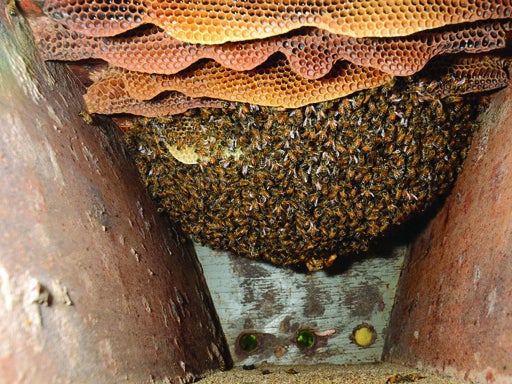 All the statements in the list on page 2 raise further questions and demand evidence. Without evidence and clear analysis there is danger that we repeat mistakes and undermine sustainability.

However, if this is true, why are beekeepers not easily adopting top-bar beekeeping? Why, according to contributors, is local-style beekeeping expanding rather than top-bar beekeeping? One reason put forward concerned the knowledge of the beekeepers – indeed this is plausible. Another explanation is economics. Top-bar hives are more expensive than local-style hives, and any increase in yield will be offset by the higher input costs. To take advantage of the moveable comb technology, colonies must be inspected and managed and this takes time, and time equals cost. Ecological issues also play a role. African honey bees Apis mellifera, in most environments, are highly mobile. They abscond when disturbed, for example after colony inspection, and loss of a colony, means loss of yield. It is by no means certain that top-bar hives are more profitable than local-style hives. It is essential that such claims are backed up by evidence. For beekeeping systems in Africa to adapt and change – yet remain productive, profitable and sustainable - all these questions must be addressed carefully and accurately.

Where local-style hives are made from logs - an alternative solution to local tree cutting might be to make hives from different materials. In Uganda for example, fixed comb hives are made from easily replenishable materials such as rattan, raffia, vines or bamboo. This ensures both economic and ecological sustainability.

One contributor identified deforestation, chemicals, pests and diseases as major threats to bee health. The solution to these problems can be divided into two different, but interacting, realms: 1) the environment and 2) genetic fitness of bee populations. Taking care of the environment is essential to sustainable beekeeping. The environment must be free of toxins and provide adequate nest sites and forage. To cope with pests and diseases, honey bees need healthy immune responses and well-adapted behavioural and morphological features. Absconding to escape predator attack is a well-developed behavioural feature of African honey bees. Local-style beekeeping systems are often designed to accommodate this trait. Maintaining many colonies in cheap hives means that the system as a whole can bear some abscondment: despite the losses, beekeeping remains sustainable.

The resilience of the population to cope with pests and diseases requires a diverse gene pool and the opportunity for genetic adaptation and freedom from contamination of the gene pool and by imports. “Conservation is needed to ensure healthy natural populations to act as a reservoir/buffer against loss due to occasional disease outbreaks and to sustain a beekeeping industry”. (Dietemann et al 2008).

Varroa in Africa – is the best solution to do nothing?

The question was posed at the start of the discussion; however we did not subsequently address this. Varroa mites have been present in North Africa since 1980s, and were reported in South Africa in 1997 and Kenya in 2009.

The first reports of Varroa in Kenya were followed quickly by calls for studies, treatments and solutions – but what is the most useful response? Comprehensive work on Varroa in Africa has been done by a number of researchers including Mike Allsopp in South Africa who has studied the spread of the mite, its impact on commercial apiaries, and on wild populations of honey bees in South Africa.

Allsopp concludes that Varroa-tolerant honey bee populations are likely to develop in Africa provided intolerant colonies are allowed to die leaving the survivors to breed. In wild populations and where bees are not stressed, this process is likely to happen much faster than in managed populations. Treating colonies by attempting to kill the mites is the worst option as this delays the onset of tolerance and retains those genes responsible for colony susceptibility in the population. The most sustainable solution, according to Allsopp is to do nothing (Allsopp, 2011).

African beekeeping must follow its own path to sustainability. The ecology of the bees and their environment, and the socioeconomic context of the small-holder farmer in Africa are variable and complex. One contributor warned us against ‘hasty surveys’, an observation of great importance. Beekeeping is undervalued, marginalised as a sector with generalists (rather than specialists) doing survey work – with inadequate budget and time. This leaves us ignorant of many aspects of beekeeping systems. Without professional, high quality analysis and evaluations, it is hard to make recommendations and there is a danger of repeating mistakes.

And yet it is clear that sustainable beekeeping must have a future in Africa. This can be achieved where healthy and resilient populations of honey bees, living in the wild and in apiaries, deliver benefits to people and biodiversity.