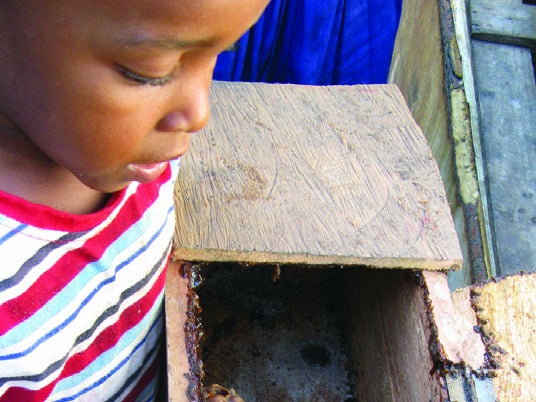 Honey bees collect nectar and pollen from the flowers of Becium grandiflorum in the morning, noon and evening. Farmers, beekeepers, NGOs, and extension workers rank Becium grandiflorum first for bee forage compared to other plants in the region. The honey produced is white and farmers sell this honey at a good price as demand from customers is high.

Becium grandiflorum is endemic to Ethiopia and widespread in northern parts of the country where it is particularly important as a honey source.

Found growing in the highlands and mid highlands of the country.

Leaves are light green with a slightly sharp edge 4.7 cm long and 1.8 cm wide. The leaves are sticky and have a good aroma that attracts bees: farmers use the leaves as an attractant for bees and brush them inside new hives.

Flowers are edible. The whole flower is plucked from a branch and eaten fresh. The flower has a pleasant, sweet taste rather like honey, hence many small ants are found on the leaves during flowering. The flowers are large, pale pink with violet veins. The pollen is pink-red in colour.

These times depend on the availability of water. During the rainy season the plant has been recorded flowering for 76 days, with an average of 68 days. Becium grandiflorum can flower four times a year if water is supplied weekly.

Number of flowers On average 267 flower heads, each head has an average of 35 flowers.

The plant has an indeterminate flowering pattern which means honey bees can collect pollen and nectar for a long period.

Seed potential Can be 3,419 seeds per flowering season, with 1-4 seeds in each pod.

Farmers use the leaves or branches of the plant to clean threshing areas and to collect manure; the branches are also used for eating traditional food ‘Thlo’. Becium grandiflorum is used also as a roofing material, for fuel and animal feed, and in soil and water conservation.

Becium grandiflorum can be propagated by air layering, ground layering, sowing, cutting, seedlings and splitting. This gives an opportunity to select the technique most suitable for the environment, and skill and management levels.

WHICH TREES DO YOUR BEES USE? Send information to the address on page 2