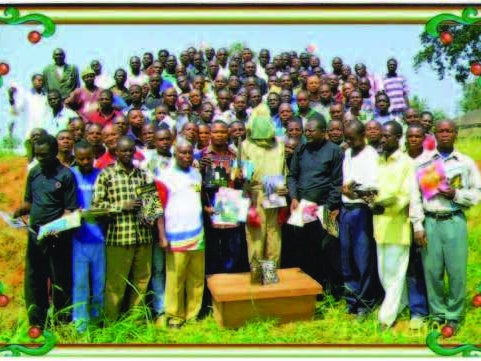 News around the World

Stingless bees are found in tropical regions world-wide. Throughout the tropics many species of stingless bees have been kept by farmers for their products (honey, propolis and pollen) and also for providing pollination services for fruits and vegetables (Roubik, 1995; Heard, 1999). They are important for the pollination of many flowering plants in tropical ecosystems (Roubik, 1995; Heard, 1999; Slaa et al, 2000). Stingless bees belong to the family Apidae where they are the only social group beside the genus Apis (honey bees) and 400+ species have been described by scientists. Stingless bees live in perennial colonies with a queen, drones and thousands of workers (Heard & Exley, 1994; Roubik, 1992). Like honey bees, some species nest in cavities, while a few stingless bee species build and live in exposed nests attached to branches or stems of trees.

Our current focus on stingless bees in Ghana dates from 1995 when Rev Brother Anthony Addai conducted a survey on the occurrence of different species in major ecological zones of the country (Addai, 1998). Attempts to culture some of the species that he found were not very successful because of the problems associated with colony transfers from natural logs into designed wooden hives. Meliponiculture (stingless beekeeping) was revisited in 2005 when a four-member research team (authors of this paper) from the Department of Entomology and Wildlife, University of Cape Coast and 25 farmers drawn from five communities adjoining the Kakum National Park, established the International Stingless Bee Centre (ISBC). The Centre was built on 8 ha of land as a sanctuary and also to facilitate research, training and extension in meliponiculture in Ghana. On 24 June 2011, the fully established ISBC was officially opened to the public.

Five satellite stations have been established in Ghana’s ecological zones to extend meliponiculture to surrounding communities. Each satellite station is made up of a bee shed and seven bee hives donated to the community for training and learning.

A survey collected indigenous knowledge on stingless bees from farmers, traditional medicine men and elders in communities throughout Ghana. Stingless bees have local names in various dialects (Table 1) and their honey has been used in the preparation of traditional medicines. However the honey was harvested in an unsustainable manner. The team also conducted scientific studies on various aspects of stingless bee ecology and nest product utilisation. Stingless bee species collected from the ecological zones of Ghana are listed below.

* The original article shows the data in a table which is not available on this mobile friendly version.

Colonies collected in the various ecological zones were brought to the ISBC for study. The colonies were stabilised for at least three months to enable the bees to acclimatise to new conditions. Appropriate wooden hives of the various species were designed and colonies transferred into them only during the dry season when forage was abundant. The ISBC is now focusing on the culture of three Meliponula species, two Hypotrigona species and one Dactylurina species out of the 11 species so far collected.

Through various outreach programmes (training workshops, radio talks, newspaper articles, public lectures) the public in Ghana and some West African countries have been educated on the importance of stingless bees. Trials on the effectiveness and efficiency of stingless bees for pollinating cashew, citrus, cocoa and some vegetables (unpublished data) have been carried out. Laboratory investigations of stingless bee honey and propolis as potent medicines against eye infections and ulcers are in progress. The general public is very much interested in stingless bee culture and utilisation.

To build capacity in meliponiculture, beekeepers, extension agents and farmers from all 110 districts in the country were trained in batches. One participant came from Nigeria and others were drawn from a timber company that supported the development of beekeeping in the western region of Ghana. All the participants were well equipped to begin their own stingless beekeeping ventures.

ISBC has plans to reach out to as many people (school children, students and the general public) as possible in Ghana and other countries of Africa on the importance of stingless bees in improving food security and environmental conservation. A training manual has been produced to facilitate future training and capacity building*. We plan to establish more satellite stations in Ghana and other West African countries, and further research will be conducted into the uses of bee products in primary health care. This will include laboratory investigations into the alleged cure of many ailments and diseases. The multiplication of colonies through the production of nuclei colonies for farmers, beekeepers and other interested people will be carried out at the ISBC. Further trials on the value of stingless bees for effective pollination of cultivated fruit crops and vegetables will be pursued. Continuous search and culture of new species for pollination and product development will be carried out.

The development of stingless bee culture is really a great initiative which we believe will have a spillover effect for other African countries. When this is achieved there will be more quality and quantity of food to feed the continent, and rural people can have better and cheaper access to health care. This will contribute to regeneration of forest biodiversity.

This project was supported with funds from Marlin Foundation through CS Fund, California, USA. We are grateful to the Ghana Heritage and Conservation Trust for providing the land on which the ISBC is built. Dr Kwame Aidoo is BfDJ’s Correspondent in Ghana.

ADDAI,A. (1998) The study of stingless bees in Ghana. International Foundation for Science (IFS) Project report no. B/2303-1. Stockholm, Sweden.

*The manual Stingless bees - importance, management and utilization prepared by the research team is being distributed to beekeepers, farmers and extension agents trained in Ghana.

Requests for the manual should be addressed to: The Director, International Stingless Bee Centre, University of Cape Coast, Ghana. Email: pkwapong@yahoo.com. The manual is reviewed on page 18.