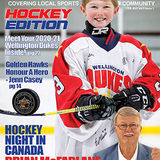 Total Sports Quinte is pleased to feature Steve Whitehead as our well deserved Athlete of the Month!

Steve was an accomplished goalkeeper for the Trenton City Sockers in men’s competitive soccer in the Motor City Soccer ( Scarborough and Durham ) and local men’s league from age 16-31. He seamlessly transitioned into an outstanding coach with Trenton Youth Soccer, Wolverines and Trenton Sockers Men’s teams..

With numerous playing and coaching titles to his name Steve turned his focus to Varsity Soccer and lead the Loyalist Lancer’s Women’s team for 15 years, as head coach for 7 years and assisting for 8.

It can be said of Steve he is tireless in his pursuit of improving his community and youth soccer.

If you ask a former player, which is a lot of players, they will tell you he is grace under pressure and a true gentleman. Awards such as Athletes, Coaches of the Year were made for people like Steve Whitehead.

Tune in weekly for great interviews with sports celebrities and local clubs and athletes!